Spurned man, Mohammad Alam, has acid splashed on Hindu girl who considered him as a brother – Nepal 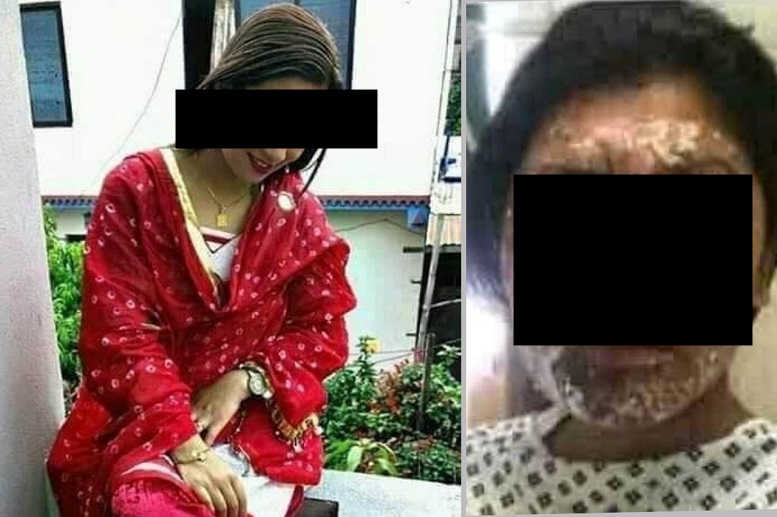 In a gruesome attack, two men named Mohammad Alam & Mohammad Munna have been arrested for  an acid attack on a Hindu girl (22) at Sitapaila in Kathmandu, Nepal. The crime took place on Thursday, 23th July evening.

The person who threw the acid was Mohammad Munna but the main culprit behind the crime was 42-year-old Mohammad Alam, Munna’s employer. Alam was enraged at the survivor for spurning him and wanted to ruin her for it. Munna claims he thought the liquid provided by Alam was alcohol, not acid; he too got his hands burned in the attack.

The survivor who is an accountant with Hyatt Regency hotel is admitted in Kirtipur burn hospital. Despite the burn injuries to her face, the acid attack survivor is said to be in stable condition. Police has arrested both accused from Dallu area within four hours of attack. The main accused belongs to Rautahat, Nepal whereas Mohammad Munna is from Bihar, Bharat.

After arresting Munna, police soon discovered chain of events and arrested Mohammad Alam as well. As per initial inputs, the prime accused and survivor knew each other but she had been avoiding his calls of late.

According to Nepal police “She seemed to have a good relationship with one of the accused persons Alam. Later she started to maintain distance from him. The accused had warned the victim several times as he was unhappy with her behavior. The woman suffered burn injuries injury on her face, neck, and chest.”

Alam confessed that he wanted to get back at the girl for turning him down. The victim who is 20 years younger to the accused, said that she never considered Alam in that manner. In her words, “I never thought that Alam was in love with me. He is like my dai (brother)”

The gory crime of ‘acid attack’ which unfortunately is prevalent in South Asia came prominently to public notice in 2005 when 15-year-old Laxmi Agarwal was attacked by Naeem Khan for refusing to marry him. The court gave 10 years imprisonment to main accused Naeem and 7 years to his accomplice. The case inspired many people to speak for acid attack survivors and it was made into a movie named ‘Chhapaak‘ featuring Dipika Padukone.