Two more temples vandalised and looted in Bangladesh, while we send free vaccines 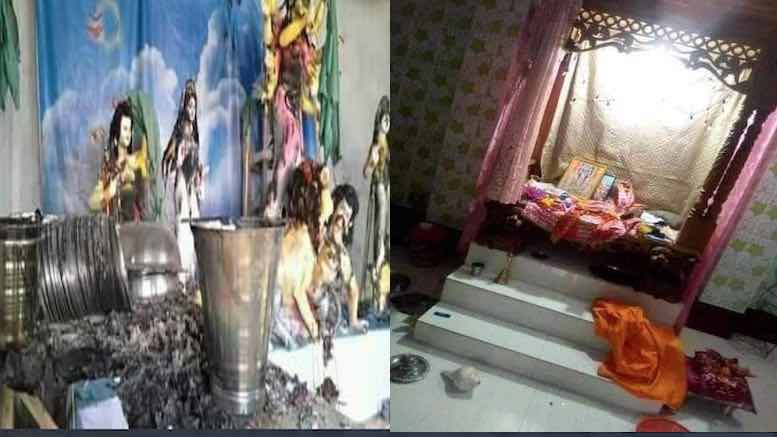 The human rights situation for religious minorities is becoming worse by the day in Bangladesh. Human rights activist Sri Pradip Chandra posted two different cases of vandalisation and looting of Hindu temples in Bangladesh on Twitter.

On 12th January, some local Muslim miscreants of Mehandhiganj P.S, Barishal district, burnt a Hindu temple. The local goons looted and plundered all the valuables of the deity. This kind of religious violence is now a daily event across Bangladesh.

12-01-2021 Burnt a Hindu temple in Bangladesh.Looted & plundered all of the Pratimma by local muslim miscreants at Mehandhiganj P.S, Barisal district , Bangladesh. pic.twitter.com/WdLsGurGuF

Again, on January 19th, at Matlab South P.S., Chandpur district, Islamists vandalised and looted another Hindu temple. The murti was smashed during the rampage.

19-01-2021 Burnt a Hindu temple in Bangladesh.Looted & plundered all of the Pratimma by local muslim miscreants at Matlab South P.S, Chandpur district , Bangladesh. pic.twitter.com/5By8VunlZz

The articles and utensils used for pujas in these two temples were also looted. Hindu worshippers found the broken and burnt murtis later.

Such hooliganism by Islamists in Bangladesh has become quite a routine. The Hindu minorities have been badly oppressed at the hands of Muslim radicals for too long in Bangladesh.

Minorities in this land have been living in fear ever since 1947. The population of religious minorities in this country has been rapidly declining and atrocities continue despite the assurances by the Awami League Government headed by Sheikh Hasina.

It is ironic that while on the one hand, Bharat is sending COVID vaccines free of cost to Bangladesh as a goodwill gesture, Bangladesh is turning a blind eye to this rampant persecution of Hindus by Islamists in their midst.