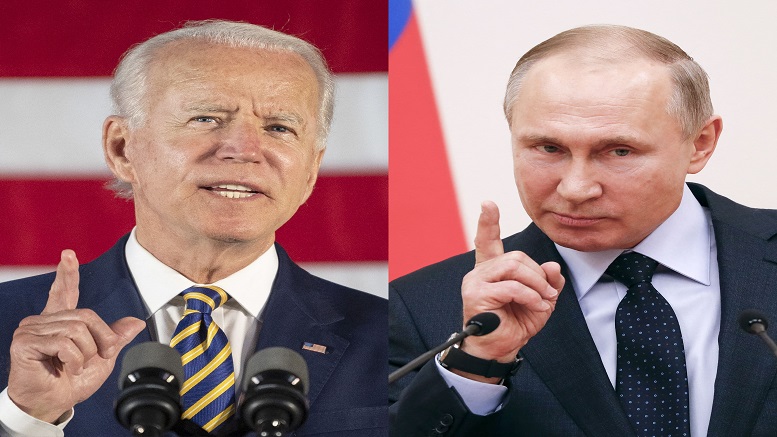 “The Kremlin increasingly views Ukraine as a western aircraft carrier parked just across from Rostov Oblast in southern Russia ,” Eugene Rumer and Andrew Weiss of the Carneige Endowment for international peace wrote amidst reports  from the US intelligence that Kremlin had amassed 1,75,000 troops on the Ukrainian border for a possible takeover of the country.

“Any use of force to change borders is strictly  prohibited under international law. Russia should  be in no doubt that further military aggression against Ukraine would have massive consequences and severe cost in response, ” the G-7 statement said from Liverpool calling on Russian to “de- escalate and pursue diplomatic channels.”

The Biden administration has been for weeks threatening Russia with  economic  sanctions and nothing beyond for which  the latter has largely  insulated itself over the years.

Karen Donfried assistant secretary of state for European and Eurasian affairs is travelling to Ukraine and Russia at the behest of President Biden “to discuss Russia’s military buildup and to reinforce the United States commitment to Ukraine’s sovereignty, independence and territorial integrity,” as the State Department put it.

So the US seems to be pretty sure given the intelligence inputs it has that Putin will attack Ukraine in the near future but is unwilling to commit it’s forces to defend kyiv. It is relying on diplomacy and the sanction threat to keep Russia at bay. Even the G-7 is divided in imposing sanctions on Russia let alone sending it’s troops to defend Ukraine if the need arises.

Germany which enjoyed a harmonious  relationship with Russia till the Merkel era has perhaps the greatest leverage with Russia as the Nord Stream 2 pipeline bringing natural gas to Germany from under the belly of the Baltic at close to10  billion euros could be snapped off by Germany but the stakes are too high for both the countries (Russia and Germany) for anything like this to happen.

Germany imports almost 85% of its gas from outside including Russia. Moreover, the entire western  Europe’s energy requirement  would be sourced through this twin pipeline.

With less reliance on coal and the phasing out of nuclear power plants in Germany by 2022 due to carbon emissions the energy  requirements of Germany and other western European  nations would  be met from the vast gas reserves in Russia’s Yamal peninsula which is supposed to hold 5 trillion cubic meters of gas.

German corporates and businesses have invested heavily in the project and former German Chancellor Gerhard Schroder heads the Nord Stream 2 company which is engaged with Gazprom the Russian energy  firm for building the twin pipelines. Companies from France and Austria have also invested in the over 10 billion euro project .

Schroder has cordial relations with  the Kremlin and the men who matter which gives credence to the German Russia  partnership and the subsequent reluctance of Germany to be a part of any NATO aggression against Moscow if Ukraine were to be attacked by Putin.
Ukraine has described this project as a geopolitical weapon of Russia as the pipeline circumvents Ukraine and could result in loss of transit fee to the latter.

The US which  is already  fearing a Russian  invasion of Ukraine  had imposed sanctions on companies involved  in the project as it also under perpetual  fear that  Nord Stream 2 will increase western Europe’s dependence on Russia and more meddling by Putin in Europe.
Moreover, their is a thinking in western  countries that profits from the natural gas exports will be used by Russia against the West as Gazprom is state owned.

As Kirstern Westphal an energy analyst at the German Institute  for International & Security  Affairs put it, “In commercial  terms, there is a case to be made for Nord Stream 2. In political terms, however it is clear that Germany will pay a heavy price.”

Given Biden’s policy of having less American boots to defend foreign lands and its recent goof up in Afghanistan, it would be interesting to see if the Biden administration goes beyond the war of words and commits US forces to defend Ukraine if it is so serious about the threat to the latter.

With the Nord Stream 2 complete and ready to take care of the energy needs of Europe apart from filling the coffers of Russia for the next few decades and with Vladimir  Putin firmly ensconced in his chair till 2036, he could just venture out and annex that aircraft carrier (Ukraine) parked just across Rostov Oblast in southern Russia knowing fully well that he is dealing with a indecisive US president and a divided G-7.