Spotlighting the systemic abuse of religious minorities in Pakistan, Bangladesh and Afghanistan On Sunday, November 22nd, 2020, the Coalition of Hindus of North America (CoHNA) organized a two-day virtual conference titled “CAA: A Lifeline for Religiously Persecuted Minorities” to showcase their experience of daily atrocities and discrimination in Pakistan, Bangladesh and Afghanistan.

With hundreds attending the live audience and video replay views that have crossed over 50,000, the conference is among the first to draw attention to how Bharat’s Citizenship Amendment Act (CAA) provides a much needed relief and a voice to some of these groups.

In his opening remarks, Nikunj Trivedi, president of CoHNA, shared the dire situation of religious minorities and the apathy of various human rights organizations toward them. More than 1000 minor Hindu, Sikh and Christian girls are kidnapped, forcibly converted and married off each year, while blasphemy laws are used to target religious minorities and subject them to unprecedented abuse, and places of worship are destroyed or converted into commercial properties. 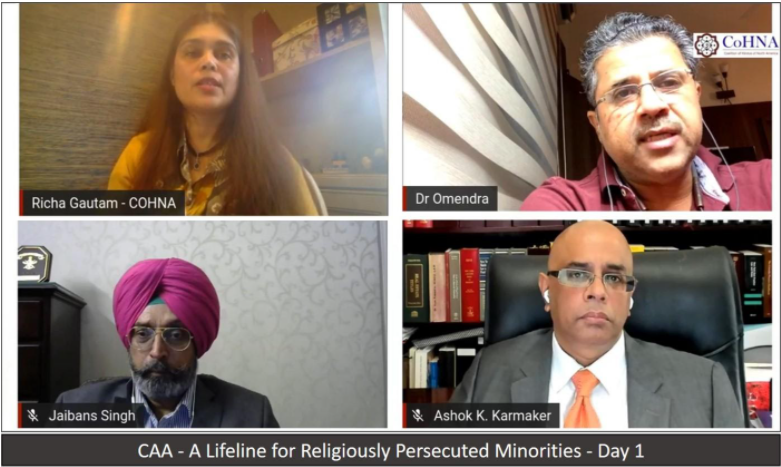 Dr. Ratnu spoke of the extreme hardship and the existential threats driving refugees to flee Pakistan. Explaining Nimitekkam’s work, a teary eyed Dr. Ratnu shared the story of a Hindu migrant from the “Dalit” community, who, when asked why he didn’t just convert to save himself, replied “How can we abandon the faith of our ancestors?”

Col. Jaibans Singh outlined the situation of the Sikh communities in the region, tracing the historical atrocities faced by them, leading to the final exodus from Afghanistan in September of 2020 and their dwindling numbers in Pakistan. Col. Singh also called upon the global community to recognize that the CAA was a humanitarian law and nothing else. “India is one of the oldest civilizations and legislation of the CAA is in line with the civilizational ethos of our country.”

Declaring himself “a refugee in exile,” Mr. Karmaker shared his own personal story and the struggles to get the world to heed the cries of those facing persecution in Bangladesh. He thanked the Bharatiya government for CAA and discussed how the United States and other countries need to do more.

The second day featured a power packed panel with Ms. Subuhi Khan, an Indian Supreme Court lawyer, writer and activist, along with Ms. Priyanka Deo, deputy editor of TV9. Ms. Khan, a Bharatiya Muslim with deep knowledge of Indian laws and the constitution, emphasized that the Bharatiya government’s decision to pass the CAA was within constitutional boundaries and that the law was  an inclusive effort to help those whose religious existence was at stake in neighboring countries. 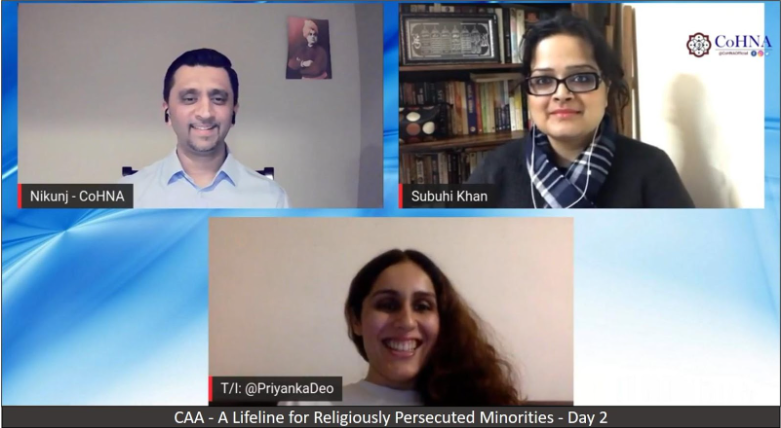 Busting several myths around the fear and propaganda created by those with alternative agendas, Ms. Khan emphasized that Bharat is a pluralistic nation welcoming all religions and ethnicities since millennia and that the world must stand against those who want to create an Islamic state by driving out religious minorities. “Opposing CAA is like opposing humanity!”

Ms. Deo, whose earlier videos discussing the CAA and other related topics have become tremendously popular, stressed that CAA has absolutely no impact on Bharat’s Muslim citizens and does not force them out or into detention camps. As an investigative journalist, Ms. Deo had also exposed certain false reports carried out by popular news outlets such as Al Jazeera, Wall Street Journal and others regarding the Modi government building camps to detain Muslims.

“I ask them, please show me where these camps are and they have no answer,” remarked Ms. Deo. Highlighting the pervasiveness of propaganda around CAA, Ms. Deo concluded: “It makes one question what one has been reading over the years. I am thankful for the power of social media which has given an alternative to citizens to call out facts. Citizen Journalism will play a big part in Indian journalism going forward.”

Following this, a panel of students from USA, Canada and the UK discussed the impact of  rampant Hinduphobia on their daily lives. The participants highlighted how the relentless one sided propaganda around CAA has led to questioning of Bharat and Hindu Dharma itself and resulted in psychological stress and cyberbullying.

Cautioning parents and adults watching the panel, the students shared that today’s kids can no longer afford to ignore such geopolitical matters and just focus on getting good grades, for these issues attack the core of their traditions and religious identity.

CoHNA, in partnership with Dphelion also released a song called “Haven,” inspired by the plight of Hindu, Sikh, and Christian underage girls in Pakistan. Through Haven, CoHNA aims to bring attention to the apathy and silence towards these gross human rights violations and hope that the world takes notice. Check out CoHNA’s CAA Resource page (cohna.org/caa) to find these and other shareable facts.