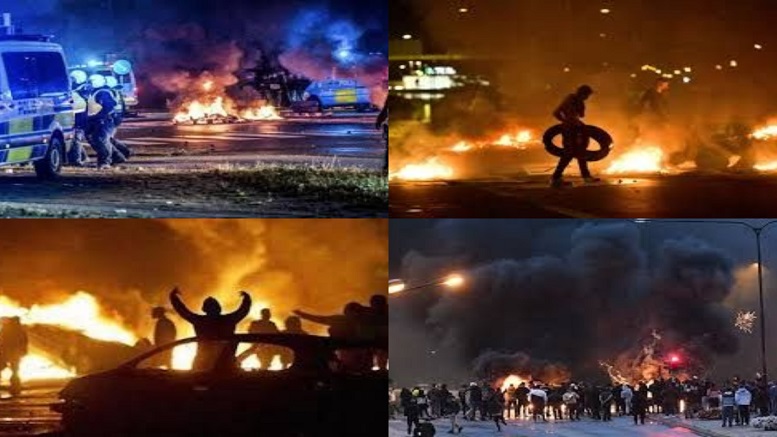 The Swedish town of Malmo is burning with scenes that remind one of the recent Bangalore or Delhi riots in Bharat. In fact, there is one common factor between all these recent events and that is the role of Muslims. Although the Islamists and liberals will work overtime to deny this but Sweden riots have again demonstrated that Muslims have trouble integrating in societies with modern values.

The riots erupted in the town after news spread that a politician from Denmark, Rasmus Paludan, was due to attend a rally and apparently burn Quran there. However, he was restrained from entering Sweden for 2 years and not allowed to hold a rally there. Paludan has been known to insult Quran by wrapping it into bacon and burning it. This hostility to Islam in Scandinavian countries has been a result of multiple issues related to immigration of Muslims.

Muslim Immigration in Sweden and the clash of values

Muslims started to settle in Sweden in mid 20th century and by 2018, they had grown to make up about 8% of the population. Many cities like Malmo have a significant proportion of migrant population from Muslim countries. This large scale change in demography has brought many problems with it. Many Muslims are unable to adjust and integrate within the new socio-cultural milieu. Many have come from authoritarian, Islamist countries who consider democracy, secularism, women rights etc. as anathema to Islam.

This has led to an increase in cases of riots, rapes and honor related violence. Malmo itself saw riots by radical Muslims, and their leftist allies, in 2008 when Islamists refused to vacate a mosque building after its lease had expired. In 2009, they rioted again against Israel whose tennis team had come to participate in Davis cup in Sweden.

In 2018, the Muslims tried to bargain their votes in exchange for planning permission to build a new mosque. We have seen a similar pattern in our country where Muslims have bargained with ‘secular’ parties for support of their agenda in exchange of votes.

But what is the real agenda? In 2018, a Muslim politician of the the Social Democratic Party campaigned for the supremacy of Islam over Swedish customs, against vulnerable children being taken care of by social services and that women with Arabic heritage should wear the Islamic veil. He was later removed from the party.

So whether it is Bharat or Sweden, the agenda is the same : supremacy of Islam. What of those who oppose them? How are the Kafirs taught a lesson? The approach is the same in Sweden too. According to SVT, the official broadcaster of Sweden, about 58% of those convicted for rape in Sweden were committed by immigrants, mostly from MENA, Middle East and North Africa, area. The largest contributors were Afghanis. Muslim girls were forced to wear the hijab, often persuaded by beatings.

Ambedkar said about Muslims  “The brotherhood of Islam is not the universal brotherhood of man. It is brotherhood of Muslims for Muslims only. There is a fraternity, but its benefit is confined to those within that corporation. For those who are outside the corporation, there is nothing but contempt and enmity. The second defect of Islam is that it is a system of social self-government and is incompatible with local self-government, because the allegiance of a Muslim does not rest on his domicile in the country which is his but on the faith to which he belongs.”

This divided loyalty of Muslims leads them to raise demands which are incompatible with culture of their new countries. They demand the same shariah which was the reason they had to run from their home countries. They refuse to accept that in western culture, freedom of speech is quite acceptable and blasphemy is not a crime. Worse, they try to impose their values on the majority culture, and form a morality police to force others to follow their ideas about life.

Sweden is projected to have 30% Muslim population by 2050 if it continues to promote immigration. There already are thousands of Jihadis amongst Muslims of Sweden. Hundreds have joined ISIS to fight in Syria and Iraq. There are organisations that alllegedly have a goal establish a caliphate in Sweden after overthrowing the government. They are biding their time and focusing on increasing population of Muslims in Sweden. The recent riots in Sweden are a warning sign for Europe. To ignore this would be suicidal.