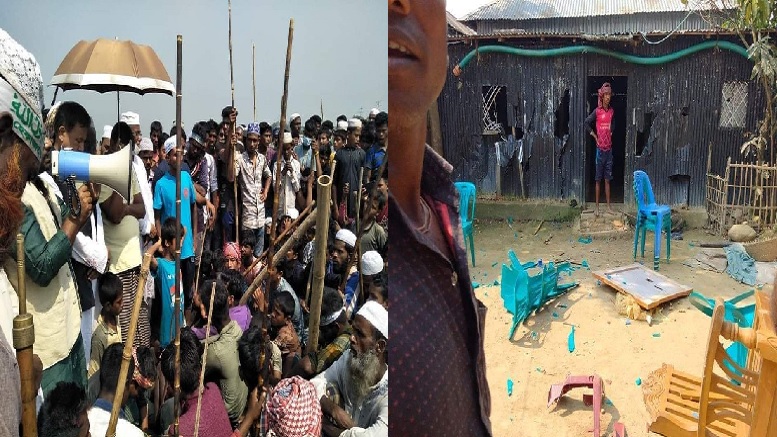 A shocking mob attack on a Hindu locality has been reported today morning from Sunamganj district of Bangladesh. Human rights activists say that a large mob of radical Muslims attacked, looted and vandalized several Hindu houses, leaving victims in a state of shock and helplessness in Shalla (Sullah) upazila of this border district which falls in Sylhet division and is adjacent to the Bharatiya state of Meghalaya.

Thousands of radical Muslim attacked on 450 innocent Hindu House, looted & vandalised at Shalla Upazila of Sunamganj district of Sylhet Division in Bangladesh. This incident took place on today at 9:00 am. pic.twitter.com/k5PZC8b5yf

The video shared above shows how valuables of most houses were looted. One elderly women narrates her plight saying ‘they looted everything’, while another elderly lady sitting on the ground cries in deep pain.

As per a report in Bangladeshi news outlet The Daily Star , the attack was carried out by supporters of the Islamist group Hefajat-e-Islam which represents madrassah teachers and students. The report adds:

“A mob of a few hundred men from Noagaon and adjacent villages gathered this morning with locally made weapons and carried out the attack, reports our local correspondent quoting Nazmul Huq, officer-in-charge of Shalla Police Station. They vandalised 14-15 houses belonging to people from the Hindu community in Naogaon, he added. However, no arrest has yet been made in this connection and case was yet to be filed, OC Nazmul Huq said.

The attack happened a day after a group of local Hefajat supporters held and handed over a Hindu youth for allegedly criticising Hefajat Joint Secretary General Maulana Mamunul Haque on social media. Police detained the youth last night. His house was among those which were vandalised, the OC added.”

Even more incredibly, Mizanur Rahman, superintendent of Sunamganj police, claimed, “there has been no reports of looting or arson so far”!

More pictures of radical Muslims those who are attacked today on Hindu House in Sunamganj district of Sylhet in Bangladesh. pic.twitter.com/SCMdEdXT3A

Such attacks on Hindus are a routine occurrence in Muslim-majority Bangladesh, often carried out to harass the Hindu minority into fleeing the country or convert. Local Muslim goons operate with open or tacit backing of local politicians and administration, including those of the ruling Awami League party. Despite such horrific and systemic persecution of Hindus, Bangladesh gets a free pass from the international community and even Hindu-majority Bharat considers it a ‘friendly’ nation!

Abul Barakat, a renowned economist and professor of Dhaka University, predicts that in the next 30 years, there will be no Hindus remaining in  Bangladesh. To establish his research, he says that an average of 632 Hindus leave the country each day and 230,612 annually.

Unsurprisingly, left-liberal propaganda sites even while acknowledging the persecution of Hindus in Bangladesh claim it is ‘not communal but fascistic in nature’! Such wordplay and attempts to downplay aside, at least the author gets one thing right –

“We can’t ignore the overpowering influence of the age-old culture of hatemongering against Hindus among Bengali Muslims, who learnt the pejoratives coined long before the emergence of Bangladesh to denote Hindus, such as kafir (non-believer), mushrik (polytheists), and mala’un (the cursed one). They learnt how to express their contempt for Hindus religion, gods and goddesses, during the peak of Muslim separatist movement in the first half of the 20th century. They even didn’t spare a dead Hindu. Mullahs taught them to wish eternal hell-fire or Fi Naare Jahannam to all Hindu souls.”

Hefajat-e-Islam was established in 2010 by Islamic maulana Shah Ahmad Shafi, a product of the infamous Sunni revivalist seminary Darul Uloom Deoband located in Western UP, Bharat. Deoband seminary has provided the ideological grounding for several radical Islamic organisations like Tablighi Jamaat, Jamaat-e-Islami and even terror groups like Taliban.

In 2013, Hefajat-e-Islam organised a siege of Dhaka to oppose the secular Shahbag protests which were demanding maximum punishment for convicted Jamaat-e-Islami war criminals, and raise a 13-point list of Islamist demands such as capital punishment for blasphemy. Clashes with government forces led to at around 50 deaths although official count was far less.

During a speech, Shafi had once asked women to stay at home saying, “Why are you sending your daughters to work in garment factories?… She goes to work after Fajr (morning namaz) at 7/8:00am and does not come back even at 8/10/12 at night… You do not know which man she is hanging out with. You do not know how much zina (fornication) she is getting involved in.” Using vulgar language, he also compared women with tamarind, a fruit that any man would like to taste.

This is not the first such attack on Hindus in Sumanganj district. 2 such attacks were reported in May 2020 alone, and many more would have gone unreported. But for the mentally colonised and rabidly anti-Hindu mainstream media of Bharat, #BlackLivesMatter protests in distant USA matter more than this human rights crisis in our neighbourhood.