Saraswati murti vandalised in Bangladesh just a day before the Puja 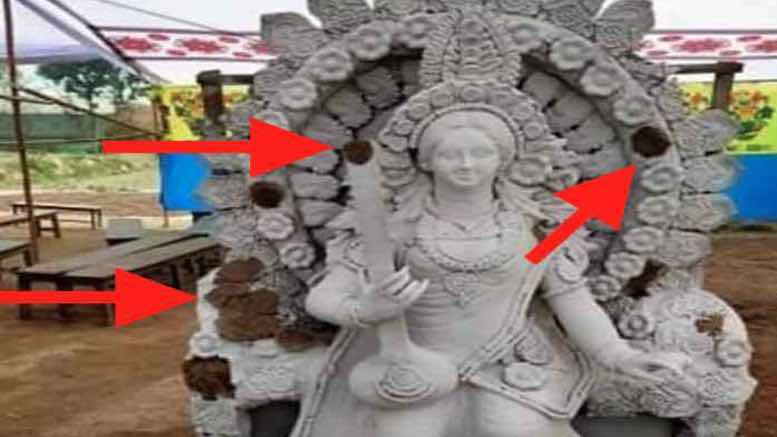 Every pujo, Jihadis vandalize murtis in Muslim-majority Bangladesh. This Saraswati Pujo was not an exception either.

Just one day before the puja,the jihadists hv smashed the Saraswati idol.
The incident took place on 14/2/2021 at 3pm in Kutai village of Nasirnagar PS in Brahmanbaria district of Bangladesh.
Local influentials r pressuring d village Hindus not to disclose this communal incident. pic.twitter.com/naX1vSfMe9

As per a Hindu activist, this incident took place in Nasirnagar police station area of Brahmanbaria district, Bangladesh. Jihadis vandalized the Saraswati murti which local Hindus were still giving shape.

Preparations for Saraswati Pujo were going on in full swing at Kutai village of Nasirnagar like every year. The preparations were in the final stage. The Jihadis vandalised the murti and mutilated it at various parts.

When the sculptor saw the vandalisation of the murti, he informed the local Hindus and they immediately came to the spot. However, when Hindus tried to report the incident to the police, local influential Muslims of ruling Awami League party pressurised them against it.

In 2016, an anti-Hindu pogrom had broken out in the same area after an anti-Islam FB post was uploaded from the hacked account of a poor Hindu fisherman Rasrasj Das; 10 temples and hundreds of houses of the Hindu community were razed to the ground as part of a conspiracy to grab Hindu land.