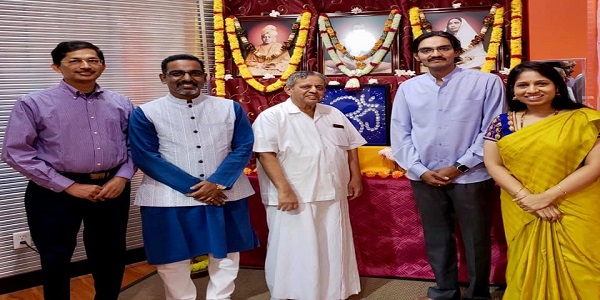 On 27th April, S-VYASA inaugurated its Yoga Center at the West Oaks Mall, in the presence of its Founder Dr. H. R. Nagendra, yoga teachers and students.

The “phones in meditation mode” policy set the tone for the event and the Vedic chanting by Vishwarupa Nanjudappa and Srikhanta Parmeshwara further elevated the positive energy in the room. Emcee Suveena Guglani invited President of VYASA Houston Dr. Sudha Rajan to introduce the “NASA to VYASA” Chief Guest of Honor Dr. H.R. Nagendra. Dr. Nagendra is the Chancellor of the S-VYASA deemed University in Bengaluru and the “NASA to VYASA” is a reference to his stint at NASA.

The Center was formally inaugurated in the traditional Bharatiya way with the lighting of the lamp by Dr. Nagendra and the Guests of Honor. Dressed in his signature white shirt and dhoti, Padma Shri Dr. Nagendra, fondly known as Guruji, left a promising career abroad and joined his aunt Lakshmi Amma to serve and spread the practice of yoga. He is credited with bringing a scientific research dimension to the usefulness of yoga through many publications and led the formulation of the 35 minute yoga protocol which incorporates all the four streams of yoga – Karma, Gyana, Bhakti and Hatha yoga for the International Yoga Day.

In his address, Guruji spoke of the great strides in yoga awareness and its practice, not only in Bharat but around the world and credited this to his student – Prime Minister Narendra Modi’s personal interest and push in the project.

Yoga, he pointed out, should not be a one day celebration but must be incorporated in the educational system to bring about a transformation in the nation. Yoga has now been made compulsory in the teachers training program and tremendous research is underway to understand how yoga can help in the prevention and improvement of cancer and diabetes. Based on Swami Vivekananda’s teachings, the University infrastructure and education delivery is considered on par with the IIT’s for yoga education.

He also lauded the efforts of directors Vishwarupa Nanjudappa, Smitha Mallaiah and Board members Dr. Sudha Rajan, Prakash Morolia and Kirthi Jain who have been pivotal in carrying out the mission and vision of the organization. Longtime key contributors to the organization and yoga practitioners themselves, Dr. Durga and Sushila Agrawal, Ramesh and Kiran Bhutada and Jugal and Raj Malani were felicitated for their generosity.

Dr. Lorenzo Cohen and Alison Jefferies were also felicitated for their support and trailblazing research work in using yoga in different cancer populations and encouraging the practice of yoga at the MD Anderson Cancer Center. S-VYASA and MD Anderson have a MOU for yoga research for two decades.  Smitha Mallaiah, Program Director proposed the formal vote of thanks.

Dr. Manjunath Sharma, Director of Research, explained yoga’s benefits analyzed from studies carried out at the S-VYASA lab at Bengaluru, Bharat. Brain waves mapped during pranayama showed distinct structural changes such as an increased thickness of the cortex. S VYASA’s teachers also taught yoga to Bharat’s research teams in Antarctica to weather the harsh conditions and the social isolation. On learning this, lab members of eight other countries also approached VYASA. The Institute has also been tapped by NASA to develop a yoga module for astronauts.

Despite a packed schedule, Dr. Nagendra took time to answer a few questions.

How did your journey in yoga begin?

My uncle Seshadri taught me yoga when I was nine years old and I also started memorizing the Gita but it was only after I did my Masters that the whole transformation started. We were a group of people trying to understand the purpose of life. We started studying the Upanishads, Vedanta and started the practice also.

Can you tell me something about Patanjali?

Patanjali is, you can say, almost an incarnation – he is the master of masters, he is everything that can be achieved by Yoga. He was a highly developed individual and brought all the yoga traditions and put it into a mathematical precise language. What we know about Patanjali and what we see is hardly one percent of what he taught. The entire dimension of Vibhuti Pada, and Kaivalya Pada (two chapters in Patanjali’s Yoga Sutra) are still not fully understood and so we are trying to do research in that direction.

You once said that as a species “we’ve become gigantic on one hand and a pygmy on the other hand.” Please elaborate?

Modern education makes your mind sharper, intelligent, creative but on the other hand calming, and silencing the mind is hardly taught. As a result, we’ve grown gigantic on one front and on the other side a pygmy – a big imbalance. This imbalance is the root cause for all the challenges we have.

Patanjali says one must use the body to gain mastery over the mind?

When you do the yogic postures, you must do it correctly. The definition of an asana is “sthira sukham asanam.” You must sit quietly, calmly without movement like a statue if you are sitting or standing. Any position you do, you must become steady. That’s the first step. Then you stay for a longer time, then you should enjoy this process and this way Patanjali says the mind will get tuned to the infinite object like the vast blue sky or the ocean – “Ananta samapatti.”  This is how you use the body as a tool to gain mastery over the mind.

Why is gaining mastery over the breath so powerful?

What would you say to someone who wants to start yoga but says they have no time?

Are they busier than our Bharat’s Prime Minister? He practices for 1 1/2 hours every day without fail.

Shavasana – the corpse pose. Somebody asked me which is one practice in yoga which I want to do without fail and it will give me all the benefits and I said keep a smile on the face all the time – “santosha anutaka sukha labha.” Patanjali says if you are happy, contented and smiling – that’s the best yoga.

What about surya namaskar?

Surya namaskar is good, it combines all the different asanas. You can start off with 9, then increase to 27, then 108.

The word “consciousness” has been cropping up more frequently. How does yoga help achieve this?

Yoga’s objective is that…to reach the highest states of consciousness. Patanjali’s astanga yoga takes you to Samadhi. Samadhi takes you from this level of consciousness to a higher level and you can keep going higher.

This June 21 is the 5th International Day of Yoga. What kind of meaningful change do you think this will bring about in the world?

The whole approach of yoga is to change ourselves. Unless we change, the world cannot change.

How do you begin your day and what is your diet like?

I sleep around 10-11 pm and get up around 2-2:30 am. For three hours, I do some asanas, pranayama, meditation, cleansing, upasanas or worship of the gods. Breakfast is normally a soup and some fruits, a little idli maybe, lunch is some chappati and dinner is some milk and fruits. In the afternoon, I rest for about 30 minutes to an hour.

You were Modiji’s personal yoga trainer. What kind of student was he?

Very regular. When we had the class, he used to call all the cabinet ministers in Gujarat. The class started at 6 am. I would go 10 minutes earlier to prepare everything. He would come 5 minutes early. The beauty of it was that because he came 5 minutes early, all had to come early and they would not miss a single day. His time management is fantastic. Once he decides, he will do it. He practices for 1 1/2 hours every day.

Can one practice yoga by following You Tube videos?

A good teacher will also tell what you should not do, that’s very important.  If you do just the way you want, you will have problems. You have to follow the directions properly. We also recommend that you must do Shavasana/Corpse pose in the end so if there are any imbalances, they will get corrected. Otherwise they will aggravate.

You are a pioneer of cyclic meditation – a yoga technique that involves doing the poses in a slow conscious manner.

The principles are there in the Upanishads, so I developed a module from them. It helps to calm the mind, brings balance and releases the superficial and deep stresses and it can take you to a very deep level.

Every pose has benefits. Vajrasan after lunch is very helpful for digestion, shavasana, some standing poses like ardha kati chakrasan (Lateral bend pose), sarvangasana is good if you can do the sarvangasana – matsyasana (shoulder stand – fish pose) combination.

Any particular direction one must face when doing yoga?

It is good to face east.

I wrote a book on happiness called “Happiness Analysis.” In the Upanishads, it is called the Ananda Mimamsa. We all want to be happy. But what is happiness? Only when we understand, then we will become happy otherwise we go in the wrong direction. You do several things but you’re not happy. So the best thing is to understand what happiness is and practice that. I chant the verses.

Three simple things we can do to harmonize our lives?