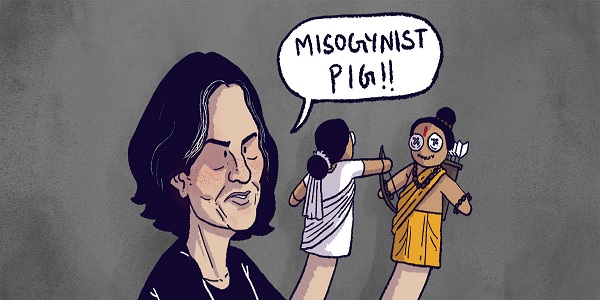 In the wake of my celebration of Diwali, one of the most popular Hindu festivals, I cannot help but consider the implications of what it means to be Hindu in America today. Universities across the country take measures to ensure that Hindu students have a way to celebrate their biggest cultural event. The diverse populations that comprise universities can sometimes result in clashes of ideology. Discriminatory, bigoted comments, however, even if under the guise of scholarly dissent and discussion, do not change the cultural significance of the holiday.

It is therefore, unfortunate to see an acclaimed institution like Rutgers University (N.J.) support Professor Audrey Truschke, a faculty member who has been accused of Hinduphobic remarks on several occasions. This stance is a slap in the face to one of Rutgers’ core values of “[fostering] the development and preservation of an inclusive community characterized by cultural understanding,” as highlighted in the university’s mission statement. It is up to the student body to protest against such gross injustices, and Rutgers must listen to the voices of its minority communities in order to uphold its values.

In April 2018, Truschke, a scholar who specializes in Bharatiya history, tweeted an article about a lawsuit against a Bharatiya journalist.

For anyone unfamiliar with these episodes, in Valmiki's telling (I'm loosely translating here): During the agnipariksha, Sita basically tells Rama he's a misogynist pig and uncouth. During the golden deer incident, Sita accuses Lakshmana of lusting after her and setting up Rama.

The journalist in question had created a religious-political cartoon that negatively depicted Lord Rama, a key religious figure in Hindu Dharma, being chastised by his wife Sita. Truschke wrote, “During the agnipariksha, Sita basically tells Rama he’s a misogynist pig and uncouth.” This insensitive diction left many angry.

The comment refers to the epic “Ramayana,” one of the foundational texts of Hindu Dharma. This work recounts the story of Lord Rama’s quest to rescue Sita after she was abducted by the demon Ravana. After Sita is rescued and her chastity is called into question, Sita is condemned to the “agnipariksha,” a walk through a flame, to indicate her purity from the corruption of Ravana. Sita’s reverence today stems from here, as the incident shows her strong heart, resilience and unwavering commitment to her family, and how she can be looked upon as a role model.

Meanings can often be distorted in translating ancient religious texts, which may result in varying interpretations. It is, however, not within scholarly convention to use such extreme language against a religious figure. To support her statements, Truschke cited a translation by Professor Robert Goldman from the University of California, Berkeley, who found her comments to be “extremely disturbing” and “highly inappropriate.” Her language was without tact, and misquoting another scholar to justify her own claims is not within the accepted practices of scholarly dissent that she claims to champion.

The most recent from Rutgers-Newark regarding my comments on #Hindutva (not Hinduism).

This is not an isolated incident for Truschke, but another instance in a long-standing pattern of Hinduphobic behavior. In September 2016, she tweeted about the Swastika, an ancient and sacred Hindu religious symbol, drawing egregious allusions to the use of the symbol by the Nazi party.

It is distasteful to completely disregard the symbol’s history as emblematic of peace. As a distinguished academic herself, it is shocking that Truschke would devolve to such elementary misconceptions. Instead of devaluing the Swastika’s cultural significance, it would have been more productive for her to spread the truth regarding a symbol that was blatantly misused by Nazi leaders for horrific purposes.

More concerning than her statements, however, is Rutgers’ strong backing of her comments regarding the Swastika and Hindu Dharma.

@Newark_History prof. @AudreyTruschke brings facts to the public, even when the facts are controversial. A historical perspective on Hindutva (not Hinduism)… https://t.co/mINcMKJRhv

The university justified her statements as a “perspective on Hindutva, not Hinduism.” “Hindutva” is a commonly misused term, as ruled by the Supreme Court of Bharat, to define acts of violence of radical religious practitioners in the name of Hindu Dharma. Any knowledgeable scholar should know that the term itself was coined a century ago to create a common sense of Hindu identity to unite the people against British colonialism.

Rutgers’ audacity to use the term to justify slander is contemptible. It is improper to appropriate the radical actions of a select few in the name of “Hindutva” to all practitioners of the faith. Whether the conversation be about Hindu Dharma, Islam or any other religion, such comments merely fuel hatred. Truschke claims to have an inherent love for Hindu Dharma that drove her to pursue a career in its study, yet her words suggest otherwise.

Most recently, in September 2019, Truschke attended a political rally in New York City against the “fascist” behavior of the incumbent Modi government in Bharat.

I am proud to be joining a diverse group of Indian Americans in New York City tomorrow that are determined to draw attention to the #ModiSarkar's record on human rights and demand justice for all Indians. Press release: https://t.co/5bW8lP0l57 #HumanRights #Hindutva #India

While her political dissent is a fundamentally protected right under the laws of freedom of speech, it is imperative to consider that the organization she aligns herself with has ties to high-profile criminals. Associating herself with such company casts doubt on her accountability and the authenticity of her claims.

Truschke appears to be highly hypocritical with this stance, contradicting the values she says she stands for. Being critical of government policies is a cornerstone of the democratic process, but there is a fine line between criticism and making discriminatory comments and making accusations of fascism. It is a serious allegation and a contentious topic that cannot be so declaratively stated of the world’s largest democracy.

This raises the question, would an institution such as Rutgers be this apathetic or even support similar remarks against Jewish, Christian or Islamic faiths, and risk sparking widespread national outrage? It is difficult to imagine so. If Rutgers truly believes in its mission statement, then the university’s administration must take steps to demonstrate that they care equally about all their students and respect their traditions and their faiths.

In fact, all universities should facilitate campus-wide organizations and clubs to advocate religious equality and promote events and festivals from different faiths. Universities should take full advantage of their diverse student bodies to expose students to new customs and spread multiculturalism. Hinduphobia may not be a widespread problem yet. Let’s keep it that way by advocating for informed discussion, not gross misrepresentation.

(This article was published on emorywheel.com on October 30, 2019 and has been reproduced here with minor changes – references to ‘India’ have been replaced with ‘Bharat’ and that to ‘Hinduism’ with ‘Hindu Dharma’.)