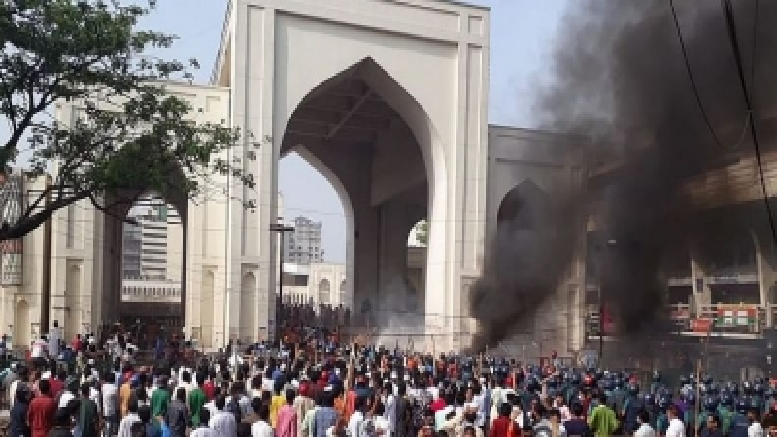 The Baitul Mukarram National Mosque area in Dhaka turned into a battleground on Friday as violent clashes erupted between the police and the supporters of a radical Islamist group protesting against the ongoing visit of Bharatiya Prime Minister Narendra Modi.

Modi arrived in Dhaka on Friday on a two-day visit to Bangladesh to attend the celebrations of the country’s 50th year of liberation from Pakistan and the 100th birth anniversary of its founder Sheikh Mujibur Rahman, the father of Prime Minister Sheikh Hasina.

The clashes broke out after a section of radicals started to demonstrate against the visit of the Bharatiya Prime Minister after the Friday prayers in front of the Baitul Mukarram mosque.

Four scribes, including two photojournalists, were injured in the clashes which erupted after the demonstrators tried to take out a procession after Friday prayers.

At that time, Modi was meeting with political leaders of the 14-party alliance at the Sonargaon Hotel in Karwan Bazar, not far from the Baitul Mokarram mosque.

Right after the prayers at noon, many radical demonstrators started raising slogans against the Bharatiya Prime Minister’s arrival in Dhaka near the south gate of the mosque, prompting the police to resort to lathi charge and fire rubber bullets to disperse the crowd.

As soon as the anti-Modi protesters started raising slogans, the leaders and activists of the ruling party’s student wing, the Bangladesh Chhatra League (BCL), launched a protest against the radicals at the mosque’s north gate area, leading to a scuffle between the two sides.

The police fired in the air and used tear-gas shells to bring the situation under control. Vehicular movement in the area was disrupted in view of the violent protests and the situation is still tense in the Baitul Mukarram area.