British journalist Edward (Ed) Luce, the Financial Times’ US national editor and columnist, has made the bizarre claim that Bharat’s health-minister Dr. Harshvardhan “think’s cow’s urine is a cure for Covid.” Luce made this false and baseless remark in a tweet targeting PM Modi for the Covid-19 second wave crisis in Bharat.

“India badly needs global help. But let’s not forget that its prime minister, Narendra Modi, recently permitted a holy gathering of up to 3m Hindus, held mass campaign rallies, and has a health minister who thinks cow’s urine is a cure for Covid. Modi is damaging India’s health.”

While the tweet indicates an irrational bias against PM Modi and a latent hate for Hindus, it is the false comment attributed to Dr. Harshvardhan that utterly reveals Luce’s agenda.

At no point since the Covid-19 pandemic first broke has Bharat’s health minister, who also happens to be an ENT surgeon, ever said that “cow urine is a cure for Covid.” So why would a senior British journalist like Luce lie so brazenly?

The answer is simple. The ‘cow urine/piss drinker’ or ‘gaumutra‘ (Hindi equivalent) slur is the most standard weapon used by Hindu-haters to target and slight the community. The slur has been used by people as varied as Pulwama suicide bomber Adil Dar, Reuters journalist Danish Siddiqui, TMC politician Touseef Khan, a British Muslim school,  ‘writer’ Ravinder Singh, and many others.

Hindu American Foundation lucidly explains why the ‘cow piss drinker’ slur, one of many words and phrases used to express Hinduphobia, is problematic and misleading. Cow urine, usually in its distilled form i.e. ark, is one of the ingredients of certain treatments in Ayurveda, the Hindu system of holistic medicine. On the other hand, there are Muslim hadith (religious texts) which talk about drinking camel urine as a generic cure for diseases. Would Luce or others of his ilk ever refer to Muslims as ‘urine piss drinkers’?

Luce was at one point the Financial Times‘ South Asia bureau chief based in New Delhi. He appears regularly on CNN, NPR, MSNBC’s Morning Joe, and the BBC. He has even written a book on Bharat, with the (not surprising) title ‘In Spite of the Gods: The Strange Rise of Modern India (2007)’. 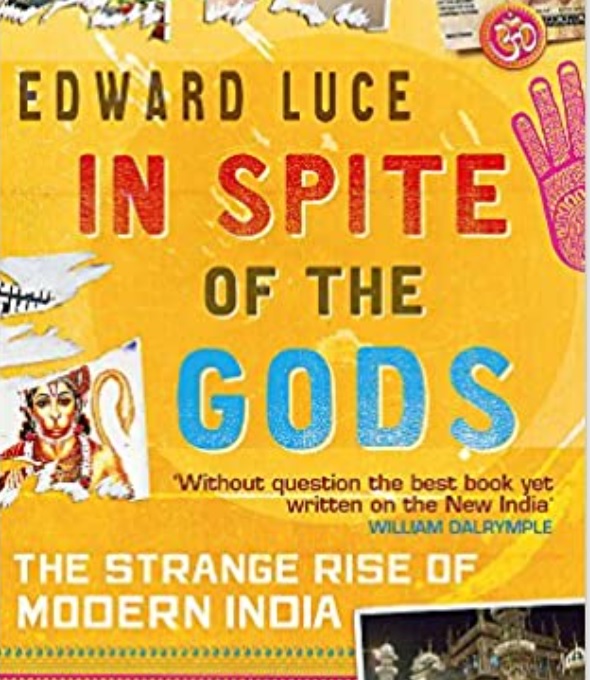 Of course, if it’s Bharat, whatever good happens here must be ‘strange’ and ‘in spite of the Gods’! Co-incidentally, this is what the British icon Winston Churchill thought about Bharat and Hindus – “I hate Indians, they are beastly people with a beastly religion.”

Luce has also written a book The Retreat of Western Liberalism in which he worries about the ‘weakening of western hegemony and the crisis of democratic liberalism.’ A critic of the Trump administration, he is clearly a ‘liberal’ which is commonly understood to mean a ‘progressive, broad-minded’ person. So why this hate for Hindus? Could it be that when it comes to Hindus and other ‘uncivilized’ peoples, the ‘left-right’, ‘liberal-conservative’, ‘atheist-believer’ distinctions used to describe Western polity cease to matter and all some Western minds see is a ‘heathen/pagan’ community which needs to be ‘civilized’.

Luce has a history of irrational Hindu hate – in the past, he has parroted lies about Hindu organisations in the UK. But sadly, his is not a one-off case. Colonial hangover and Hinduphobia are real issues that the West, especially the English-speaking West, has to urgently tackle. Otherwise, attempts at forming a ‘grand alliance of democracies’ to define the international order will remain stillborn.