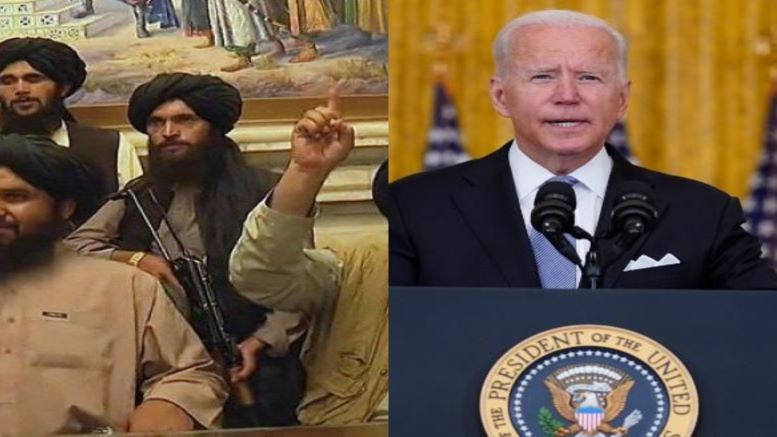 Abdul Ghani who was supposed to be the saviour of the Afghan people and was supposed to safeguard their interests, fled Afghanistan with cars and choppers full of money and the bundles he could not carry lay scattered on the tarmac of the Kabul airport.

This act of the Afghan President epitomizes the Afghan government’s faithfulness and dedication or the lack of it towards their motherland over the past decades.

Imagine our President or Prime Minister fleeing the country with bags of money if we are attacked by China.

Afghan governments have never been faithful to their people and their army and police were no different. US military trainers who worked with recruits were of the opinion that Afghans suffered from other insoluble problems including a lack of motivation and a corrupt chain of command that preyed upon its own soldiers and police.

Major Greg Escobar a US army officer spent 2011 to sort out an erring Afghan unit in Pakrika province bordering Pakistan. The first Afghan battalion commander whom Escobar mentored lost his job after he was charged with raping one of his male soldiers. The commanders replacement in turn was killed by his own men.

Although the US had predicted that the Afghan forces will hold on for 3 to 6 months against the Taliban onslaught Secretary of State Antony Blinker admitted it happened more rapidly then they had anticipated and this was surely an intelligence failure on the part of the Biden administration though  Blinker did not accept this.

For over two decades the US invested more than 85 billion dollars to train the Afghan forces. Today all that is left is arsenals of weapons, ammunition dumps and supplies that have fallen into the hands of Taliban who can now move around  in armoured vehicles, multi armoured battle tanks and have also exchanged their old AK -47’s with US made machine guns.

The book from Washington Post “The Afghanistan papers- A secret History of the War,” has the US military officials harbouring fundamental doubts about the Afghan forces and the latter’s inability to shed their dependency on the US money and firepower. The capitulation of the Afghan forces to the Taliban bore testimony to the doubts raised by the US military officers albeit privately.

Obama administration’s decision to increase the strength of the Afghan army from 2 lakh to 3.5 lakh meant that quality was compromised for quantity and the Afghans were rushed through boot camps even if they could not shoot or perform other basic tasks. In spite of some officials warning the government Pentagon went ahead with the proposal to swell the ranks.

Brig. Gen john Ferrari who was at the training command said “Either you can have a small Afghan army and police that is trained to a high quality or you can have a lot of them but they won’t meet the quality standards. They will just be poorly equipped and poorly trained.” But Pentagon obviously thought otherwise.

Though the situation on the ground was very different the US commanders continued to give a rosy picture back home and said that everything was hunky dory as far as the Afghan army and training was concerned. Mark. A. Milley who is currently the chief military advisor to President Biden and Chairman of the joint chiefs of staff had in 2013 in his capacity as the deputy commander of the US forces in Afghanistan said “I am much more optimistic about the outcome here as long as the Afghan security forces continue to do what they have been doing. If they continue to do the next year and the year after and so on then I think things will turn out OK in Afghanistan.”

The whole world saw how the army capitulated in front of the Taliban in a matter of days.

The corruption in the Afghan government and the army helped the Taliban hierarchy as they used a combination of cash, threats, and leniency to breach the Afghans and overrun the country. The Afghans have been their own enemies as they have failed to shoulder responsibilities for the sake of their country and have for long piggybacked on US aid and doleouts.

Thus even though the American  governments  over the years invested a lot in Afghanistan monetarily and in training  the Afghan  army a combination of  wrong portrayal of the ground  reality by the US army commanders, the US government’s and Pentagon’s  insistence  on compromising the training  skills by increasing  the numbers (which ultimately  counted for nothing) combined with  the rampant corruption  prevailing in the Afghan  government and the top hierarchy  of the Afghan  forces  ensured that the Taliban had a cakewalk in Afghanistan.