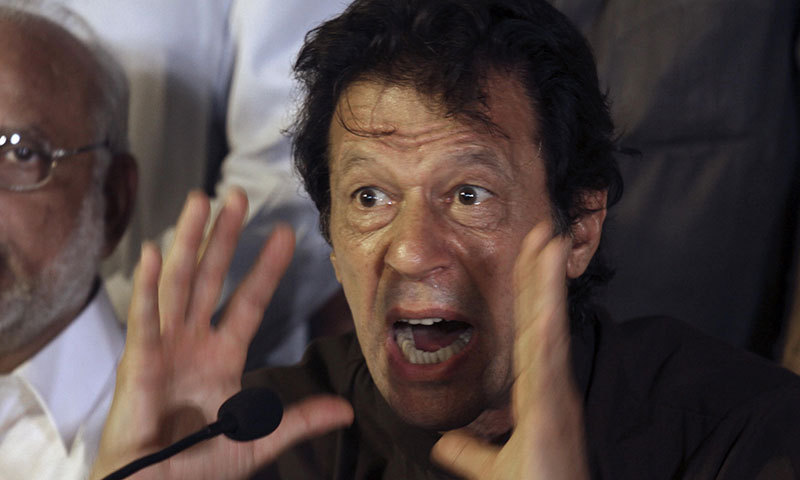 Pakistan is in the talks again, and so is their Wazir-e-Azam, Imran Khan. A country that enjoys the reputation of being a safe haven for terrorists, a country that has persecuted and cleansed minorities of all kinds in the past 70 years of its existence, which has carried out an unprecedented genocide of 3 million Bengalis in a mere 9 months, continues to prove that the entire country is infected with a bitter and hateful mindset courtesy their mullahs and elites.

Pakistan was never expected to top the charts when it comes to tolerance and inclusion. But the way some of its citizens reacted after the Pakistani PM took to twitter to wish his Hindu citizens on Holi, is a breath-taking display of religious bigotry and Hindu hate.

Translated from Urdu, the message reads –

The Freudian slip in this message shows that despite his vehement declarations to the contrary, Imran Khan knows that minorities, especially Hindus, in his country are neither comfortable nor secure. How can they be, when not a day passes without cases like that of 14-year-old Mehak Kumari who was kidnapped, converted to Islam and ‘married’ off to a 28-year-old twice-married Muslim man with 4 children.

But even this perfunctory message sent out during an auspicious day for Pakistani Hindus irked his awaam beyond belief, and soon many Pakistanis swarmed on Imran Khan’s TL condemning his act of sending out good wishes. The innate Hindu-hate in these condemnations was unmissable.

Hindus are not our brothers so please speak for those J&K and indian Muslims.

Some brought up the Kashmir issue, anti-CAA violence in Bharat and the recent Islamist-triggered Delhi riots to castigate Hindus, and the Pakistani Prime Minister’s Holi wishes:

The above message reads – “You should be ashamed (Imran Khan) Niazi, Hindus are oppressing Muslims in India and here you are wishing Hindus on Holi…I hate you.”

Asif Raza Mir’s message above says: “A Holi is also being played in Kashmir Mr. Prime Minister. Is this horrible “Holi” colored in human blood? Why Greetings ???”

Muhammad Ansari’s tweet above reads – “They have made Sikhs, Hindus and Christians religious places of worship and religious places by demolishing the mosques of Muslims and locking some as public land and forbidding the lives of those who practice religion. Are you building an Islamic welfare state where Muslim oppressed and minority are safe?”

Such is the level of anti-Hindu and anti-Bharat propaganda coursing through Pakistan. Citizens of a country that systematically denies rights to Hindus to practise their religion, that refuses to pass laws prohibiting conversion of minors, that Constitutionally and institutionally discriminates against Hindus and other minorities, believe that it is Bharat which is inflicting such injustices on its Muslim minority! Talk about projecting one’s own flaws on others.

A survey conducted by All Pakistan Hindu Rights Movement (PHRM) found that out of 428 Hindu places of worship in the country, 408 had been converted into restaurants, government offices, madrassas, parks and schools after 1990. Only 20 Hindu temples are currently operational in Pakistan.It was only late last year that the Pakistani govt. started making some noise about restoring and handing over 400 Hindu temples back to the community.

Pakistanis like Muhammad Ansari believe that their PM even greeting Hindu citizens on Holi indicates ‘oppression’ of Muslims at the expense of Hindus! No wonder this society condones and socially sanctions the abduction and forced conversion of minor Hindu girls to Islam – after all, what greater ‘blessing’ could a polytheist kafir receive than being brought into the ‘one true faith’?

The desire to inflict punishment on already oppressed Hindus living in their own country, due to alleged misdeeds committed by Indian Hindus against Indian Muslims also shows the deep Islamist indoctrination within Muslim nations. Can we imagine any Hindu calling for action against Indian Muslims over the way Pakistan persecutes its Hindu minorities? Forget that, Hindus in West Delhi did not react against Muslims living in their midst when deadly rioting instigated by Islamists had broken out in North East Delhi!

We also spotted some Pakistanis outraging that their Prime Minister had said a few kind words on a non-Muslim festival, while he allegedly never wishes Muslim citizens on their festivals.

But this was proved to be another brazen lie. Imran Khan extends heartfelt wishes, with a generous dollop of religious history and preaching, on every Islamic festival like Eid. Just imagine the dangerous levels of pathology in a society which despite being 98% Muslim, with Islam as state religion, with parallel sharia courts having veto on ‘Islamic issues’, still feels ‘Islam is in danger’.

If the leader of Pakistan is not spared for sharing Holi wishes on Twitter, what would be the fate of a weak and isolated Hindu community in Pakistan on the day of Holi and Diwali? A Pakistani Hindu refugee living in Bharat tearfully reminisces the fear that grips Hindus even at the thought of celebrating Holi in Pakistan –

"we could never celebrate #Holi..If a #Hindu in #Pakistan spills some colour by accident on a #Muslim, they would come to kill you:" says a Pak Hindu Refugee while breaking down. Sadly, same #Islamist mindset alive & well in Bharat too https://t.co/MEtt4gZOjH https://t.co/HO7sex7imX

It is tragicomic that such Pakistanis preach Bharat about minority rights. Imagine a Mohammad Shahrukh pointing a gun to the face of a US police officer, or a Muslim mob surrounding and lynching a UK police squad?The reality is that minorities in Bharat, i.e. Muslim and Christians, are handled with kid gloves.

On the other hand, the ever-decreasing Pakistani Hindu population keeps suffering brutal persecution without ever resorting to the sort of violent rioting so commonplace in Bharat. Imran Khan knows that his ‘naya Pakistan’ has nothing naya (new) to offer to its minorities. His periodic platitudes towards his minority citizens are only meant for PR purposes, while the State and its radicalised population continue the project of a slow genocide of Hindus and other minorities.