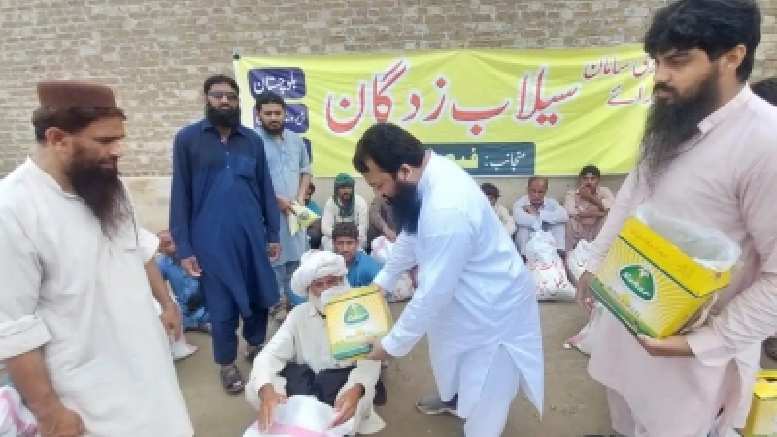 Pakistan’s famed jihadi groups like the Lashkar-e-Taiba (LeT) have come out in full strength to deliver relief work and help the flood-affected masses. Meanwhile, the Pakistani government has banned international NGOs from carrying out flood relief work even as it has made a global appeal for funds.

An investigation by Pakistani journalist Taha Siddiqui, editor-in-chief of South Asia Press, living in exile in Paris since 2018, reveals that LeT has resurfaced in all four regions of the country including Punjab, Balochistan, Khyber Pakhtunkhwa and Sindh ostensibly to help in flood relief work. Siddiqui says: “The group is raising funds for the flood-affected while proselytising about jihadi ideology, amidst it’s so-called relief efforts.”

The investigation claims that the terror group is now collecting donations under a new name – Allah-u-Akbar Tehreek, and is working in close collaboration with Pakistani military and other organisations.

With eyewitness accounts, videos and photographs, the investigation shows that Hafiz Talha Saeed, son of LeT chief Hafiz Saeed, is behind the revival of the group. The other prominent organisers include Hafiz Abdur Raouf, who is known to be close to Hafiz Saeed and also Nadeem Awan who has been with the LeT since its early years.

The LeT has been banned by the US and the UN for its terror activities. Based out of Lahore in Pakistan, it has carried out terror attacks almost all over India, including the 7/11 Mumbai attacks in which over 150 people were killed. It has also been associated with terror activities in Afghanistan. With mounting international pressure, it has changed its name to Jamaat-ud-Dawa (JuD) and Falah-e-Insaniat Foundation (FIF).

In an exclusive interview to India Narrative, Siddiqui said: “Whenever natural calamities strike Pakistan, Jihadist groups come out to raise funds and try to provide relief efforts. During such a crisis, people are vulnerable and these groups take advantage of their vulnerability to find recruits, to radicalise them and to preach extremist ideas.”

Siddiqui adds that in such circumstances, people are totally dependent for aid and need help so they are much easily influenced.

“The money that the jihadi groups raise can be used for other activities. There is no audit, there is no transparency where the money goes. So, when I saw the floods in Pakistan, I knew that this phenomenon will again occur because it has happened every time-during the 2005 earthquake and also the 2010 floods. In 2010, I had travelled with the JuD/LeT and saw how they were operating,” Siddiqui says.

The investigation shows that not only is the group recruiting young men for terror activities openly but it has also been granted clandestine access to their buildings, which have been shown as sealed by the Pakistani government.

All these activities are happening at a time when a Financial Action Task Force (FATF) team is visiting Pakistan to verify whether the country is still abetting and financing terror activities.

The investigation by the South Asia Press has procured photographs from across Pakistan and matched these with the social media accounts of some of the members of the terror group. Siddiqui says: “…several sources, including the group’s own members’ social media accounts confirm that they are involved in fund raising activities and they openly claim that these relief efforts are being done by Lashkar-e-Taiba/Jamaat-ud-Dawa, now called Allah-u-Akbar Tehreek.”