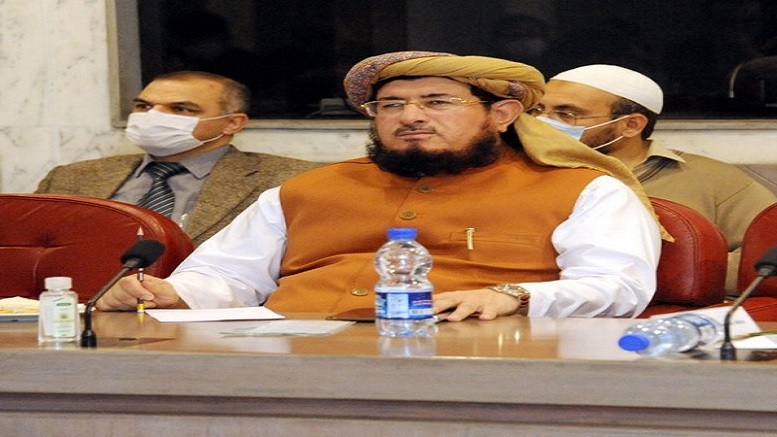 The Pakistan Police have initiated an investigation against Jamiat Ulema-e-Islam (JUI-F) leader Maulana Salahuddin Ayubi, who is a Member of the National Assembly (MNA) from Balochistan, for his marriage with a 14-year-old girl.

Police filed the case based on a complaint by an NGO Anjuman Dawat-o-Azeemat working for the welfare of women in Chitral, Balochistan. Maulana Salahuddin Ayubi was elected to the National Assembly from constituency NA-263 (Kila Abdullah) as JUI-F leader. Ayubi is in his late 50s according to Pakistan media and the girl is four times junior his age.

According to a report by Dawn, the girl was a student of Government Girls High School, Jughoor, where her date of birth had been recorded as of October 28, 2006, which showed that she had not attained the age of marriage.

Chitral Police Station SHO, Inspector Sajjad Ahmed told that on the basis of the complaint lodged by the NGO the police had reached the girl’s residence. The father of the girl had completely refuted her marriage and had even given an affidavit to this effect. He also assured the authorities that he will not send his daughter until she reaches the age of 16.

However, all these laws are merely on paper. In accordance with Sharia law (Muslim religious law), Pakistani courts have ruled that men can marry underage girls as long as they have had their first menstrual cycle. The Sindh High Court in Karachi gave this ruling last year in the case of 14-year-old Huma Younus, a Catholic girl who was abducted, forcibly converted and married off to a Muslim adult in October 2019.

For that matter, even courts in Bharat have ruled that Muslims girls can be married off once they attain puberty, and that in the absence of evidence, puberty is assumed on completion of the age of 15 years! So technically, Muslim girls in Bharat can be married at 15 (or even sooner if menstrual cycle has started) while Pakistan has set the minimum age (on paper) as 16. Even instant triple talaq in Bharat was banned long after it had been outlawed in Pakistan. So we can conclude that for Muslims, laws of ‘secular’ Bharat are much more orthodox and fundamentalist than even Islamic Pakistan! All thanks to votebank politics and the race to appease hardline Muslim organisations, and an out-of-control legal regime.

While the whole of Pakistan is grappling with a serious child marriage problem – Pakistan has the sixth highest number of child brides in the world at 1,909,000 – minorities there suffer a double whammy. At least a 1000 girls, mostly Hindu and some Christian, are abducted, raped, forcefully converted to Islam and then married off to their abductors, every year in Sindh alone.

“Soon after the bill was passed in 2016, Jamaat-e-Islami leader Sirajul Haq held a meeting with PPP leader Asif Ali Zardari and conveyed the grievances of religious parties and the Council of Islamic Ideology,” a senior official in the Sindh government, who was privy to the developments back then, told Pakistani newspaper The Express Tribune on condition of anonymity. “Soon after, the PPP leadership conveyed a message through the chief minister (CM) to the then Sindh Governor Justice (Retd) Saeeduzaman Siddiqui, asking him not to ratify the bill,” he revealed.

Eventually, the bill was returned by the governor who asked the assembly to “revisit” it. He had primarily raised objections over the clause that denounced the conversion of minor girls and said that the practice should be stopped. Challenging it, former Sindh governor Siddiqui had said, “When Hazrat Ali can convert to Islam at a young age, why can’t Hindu girls?”

In 2019, Dr. Ramesh Kumar Vankwani from the ruling PTI, who is also patron-in-chief of Pakistan Hindu Council (PHC), submitted Child Marriage Restraint Act (Amendment) Bill 2019 and the Criminal Law (Protection of Minorities) Act 2019 in Pakistan’s National Assembly. The bills were moved in the wake of kidnapping of two Hindu sisters,  Reena and Raveena, and kidnapping of another Hindu girl, Shania, and their forced conversion to Islam.

The bill for protection of minorities barred conversion of minors and called for sensitisation of government officials, police officials and members of judicial service, and suggested setting up of specific courts to hear such cases. It proposed strict penalties and fines on anyone involved in such forced conversions and marriages. Hindu legislators also demanded strict action against the culprits including controversial religious figures (like Sufi cleric Mian Mithoo) who are involved in forced conversions.

Vankwani’s Child Marriage Restraint bill aimed at fixing marriage for girls at 18 was rejected with majority votes soon after. The other bill is still stuck in the National Assembly.

In 2020, a “Protection of the Rights of Religious Minorities Bill” was introduced in the Senate of Pakistan that could prevent forced conversions of minority girls, but it was turned down by the Senate Standing Committee on Religious Affairs and Interfaith Harmony chaired by Jamiat Ulema-e-Islam (F) (JUI-F) senator Abdul Ghafoor Haideri.

This is the harsh reality of the Islamic Republic of Pakistan, kept hidden from us by those who prefer taking gushing interviews of dictators like Pervez Musharaff, or waxing eloquent about ‘shared culture’ at ‘Aman ki Asha’ mushairas and literary soirees.