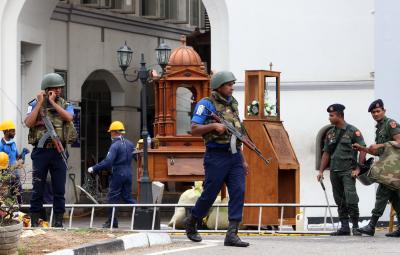 While ruling that former Sri Lankan President Maithripala Sirisena had violated the fundamental rights of the victims of the 2019 Easter Sunday attacks, the island nation’s Supreme Court said on Thursday that top officials failed to act on the detailed intelligence information shared by Bharat to avert the deadly suicide bombings that killed 269 people.

“Easter Sunday was just a few weeks away when the heads-up about the imminent attack came from India, but there was little alertness or perceptiveness shown by officials to carry out any measures to safeguard any of the churches in the country,” a seven-member judge bench while delivering its judgment relating to 12 fundamental rights petitions.

The petitions were filed by survivors of the attack and three Christian priests.

All compensations are to be paid to a victims’ fund and each victim is to be paid 1 million LKR.

The court also directed that disciplinary action should be taken against Jayawardena for his failure to act on the various intelligence information from Bharat.

On April 21, 2019, three churches in Negombo, Batticaloa and Colombo and three luxury hotels in the capital city were targeted in a series of coordinated IS-related terrorist suicide bombings.

Later that day, there were smaller explosions at a housing complex in Dematagoda and a guest house in Dehiwala.

A total of 269 people were killed, including at least 45 foreign nationals, three police officers, and eight bombers, and at least 500 were injured.