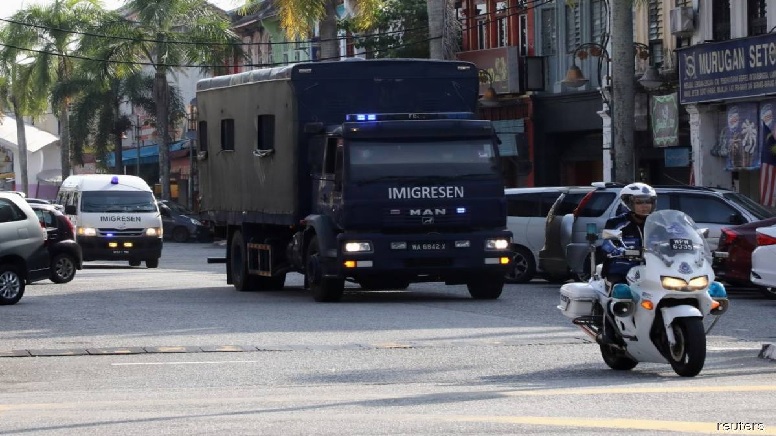 UN agencies, western governments, including the US, and global human rights groups have strongly opposed Malaysia’s sudden repatriation of 1,086 Rohingya refugees to Myanmar. This comes at a time when 90 Rohingyas, illegally heading for Malaysia from their camps in Bangladesh, have been stuck in a boat with engine failure off Bharat’s Andaman Islands. Officials in Andamans say efforts by technicians of the Indian Navy to repair the engines of the Rohingya-laden boat failed on Tuesday.

They said on conditions of anonymity that the local administration has to take a call as to whether it would allow the navy to bring the boat to the shore to allow for refit or repair and to feed and provide medical treatment to the famished stranded Rohingyas, most of whom are suffering from acute dehydration and diarrhea. It was so far not clear whether Bharat will just push the boat back into Bangladesh territorial waters or allow it to proceed to their South-east Asian destination.

Some officials said the pushback to Bangladesh appeared to be the ‘most likely option’, for which some diplomatic follow-up in Delhi may be needed. “Allowing the boat to sail towards Southeast Asia does not seem like a good idea, because no country in that region, not even Muslim majority Malaysia or Indonesia, seem willing to take any more Rohingyas,” said a senior Bharatiya official, but on condition of anonymity.

Meanwhile, the US embassy in Kuala Lumpur said in a statement that it has voiced “serious concern” over the repatriation because the Rohingyas sent back to Myanmar could be at “grave risk on return”. Other western embassies, like those of the UK and Canada, tried to stop the repatriation as well, citing similar concerns of ‘risk-on return’ to Myanmar which has witnessed a military takeover this month.

The UNHCR in a statement said six of the deportees were registered as refugees with the agency and it was “downright unfair” to deport them. The US-based Human Rights Watch has urged the Malaysian government to “urgently investigate” the Immigration Department’s return of 1,086 Myanmar nationals to Myanmar in defiance of a court order.

On February 23, the Malaysian High Court granted a temporary stay on the proposed deportation of 1,200 Myanmar nationals in custody to allow judicial review. Despite the court order, immigration authorities handed over 1,086 of them to three ships of the Myanmar navy ships on Tuesday.

Malaysia’s director-general of immigration, Khairul Dzaimee Daud said that the Myanmar nationals returned did not include UNHCR “cardholders” or Rohingya refugees. He added that those being sent back committed immigration offenses and are not asylum seekers. Human Rights Watch, Fortify Rights, and others called for Malaysia to allow UNHCR, which has been denied access to Malaysian immigration detention centers since August 2019, to have access to the detainees.

Myanmar is currently seeing some of its biggest protests in years against a military coup. Military leaders overthrew Aung San Suu Kyi’s elected government and have placed her under house arrest, charging her with possessing illegal walkie-talkies and violating the country’s Natural Disaster Law. Protesters are demanding an end to the military’s rule and want San Suu Kyi’s release, along with senior members of her National League for Democracy (NLD) party.’

This episode is instructive to Bharat as it shows the hypocrisy of the Islamic world. The same Malaysia has given refuge to the absconding terror-accused televangelist Zakir Naik who is wanted in Bharat, and refused to extradite him saying they fear ‘he will not get a fair trial.’ But they have just deported over 1000 of their ‘ummah brothers and sisters’ to a Buddhist country where the deportees allegedly faced persecution. Its a different matter that none of the Western agencies and media outlets talk about the violent separatist movement waged by Rohingya Muslims through jihadi outfits like ARSA, which forced Myanmar to crack down in the first place.

But over 40,000 Rohingya refugees in Bharat, whom our intelligence agencies have identified as a fertile breeding ground for terror recruit, are being treated far better than the real persecuted Hindu refugees from Pakistan and Bangladesh that Bharat has a genuine moral obligation towards. Judges keen to prove their liberal credentials haul up the government and demand list of facilities provided to Rohingyas! While Islamists and political parties like PDP, AIMIM, AIDUF, Congress are busy settling Rohingyas and illegal Bangladeshi Muslims all over the country, including in sensitive border regions like Jammu.

The same Islamic world, including Malaysia, grovels before China while it cracks down on Uighur Muslims. But they are quick to condemn Bharat on passing a humanitarian law like CAA or correct the blight that was Article 370.

Lesson for Bharat is clear, if our rulers and elites are serious about making Bharat a world power to reckon with – learn to ignore external noise, especially Western media and activist lobbies, with the contempt it deserves, and pursue national interest guided solely by our civilisational Dharmic ethos.

UP ATS arrests Rohingya from Aligarh, was residing on forged documents