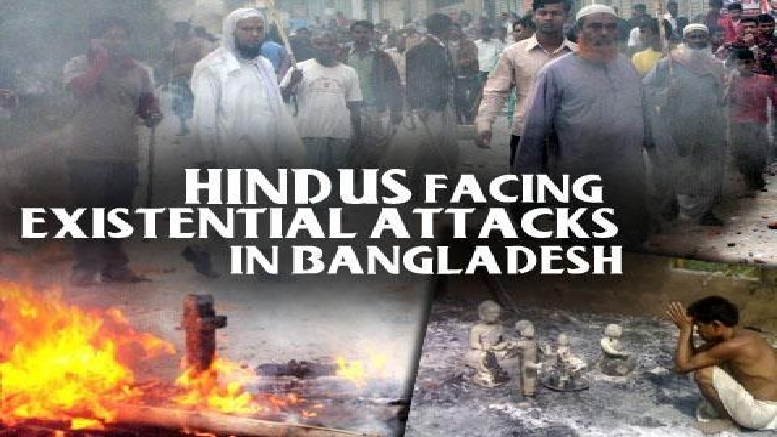 The World Hindu Federation, Bangladesh chapter, has alleged that the persecution of Hindus in Bangladesh increased during the COVID-19 lockdown.

Giving an account of alleged atrocities, the federation said there had been a series of incidents in last month like shops being looted, businessmen being killed, land being grabbed, temples being demolished and idols vandalized, families being forced to leave the country and girls and women being abducted and raped.

“In April, 12 business shops of Hindu owners were looted, 2 Hindu businessmen were killed, 307 acres of Hindu land were occupied by local criminals, 2 temples were demolished and idols vandalized. 21 Hindu families were evicted from their settlements and 14 Hindu families forced to leave the country,” the federation said in a statement on Saturday.

“The human rights situation is becoming worse day by day in Bangladesh but unfortunately no one has been arrested yet,” the federation lamented.

It demanded exemplary punishment to the criminals for the atrocities unleashed on the minorities in the country.

The federation listed a series of incidents of atrocities on the Hindus. They are as follows:

April 4: A land grabber occupied the ancestral property of one Narayan Sarkar in Puran Mahipur Union of Mahipur Police Station in Patuakhali district.

April 7: The Islamic fundamentalists vandalized the idol of a Hindu temple located in Dashmina upazila of Patuakhali district.

April 8: Police arrested a school teacher, Indrajith Hazari (35), on the false allegation of posting “abusive” words about a prophet.

April 9: The miscreants vandalized the idols of Sri Sri Radha Gobind and Lakshmi of Shiva temple in Kuki Kalidas village of Shibganj upazila of Bogra district.

April 10: A man grabbed the 6 bighas of ancestral land of Jobon Mridha in Morelganj of Bagerhat district.

April 11: A local goon demanded 5 lakhs taka from a Hindu businessman Asit Kumar Sarkar, who is a resident of Titukandi village in Alamdanga upazilla in Faridpur district. Later, the goon and 30 of his associates attacked and seriously injured Sarkar.

April 12: A man and his sons looted the house of Sudhanshu Das of Nazirpur village in Nasirnagar upazila of Brahmanbaria district and cut down valuable trees worth more than three lakh taka.

April 13: A helpless widow Basna Rani Das and her son and daughter were brutally beaten up and injured by local criminals who also grabbed her house and other properties.

April 14: A local goon threatened to kill a retired Hindu teacher, Dipak Kumar Raha, when he wanted to return to his house after a long time from Narail district. The goon captured Raha’s house and property and forced him out of his house.

April 15: One Dhaneshwar Roy’s daughter Pratima Rani was forcibly taken away and converted to Islam in Dimla upazilla in Nilphamari district.

April 16: A man and his two sons carried out an attack on a Hindu family in Paschim Sujankathi (Mallikpur) village under Agailjhara police station in Barisal district. Four Hindus were admitted to the hospital with serious injuries.

April 17: Ashtami Sarkar (14), daughter of Nimai Sarkar of Rajshahi district, committed suicide in her room as she was regularly harassed by a man and his associates.

April 19: Police arrested one Madhu Kundu (32) of Fakirhat in Bagerhat for writing about mass gathering during the performance of last rites of a man at Nasirnagar in Brahmanbaria district.

April 21: Thirty Hindu families were attacked in Satkania by a local group of 60 people. 25 Hindus, including children, were seriously injured.

April 22: The criminals vandalized a temple and attacked several Hindu houses at Akkelpur municipal area of Joypurhat district for obstructing gambling at the Parghati temple.

April 24: The goons attacked a Hindu family at Mongla in Bagerhat district with the intention of evicting them from their homes. Six members of the family, including a pregnant woman, were injured.

April 25: A local group attacked and vandalized the house of Rabidas and grabbed property at Sariyakandi in Bogra district.

April 27: A local and his two sons beat up and injured Narendra Moktar to grab his properties at Begumganj upazila in Noakhali district.

April 28: The miscreants attacked a Durga temple and its adjoining Bankali temple at Maheshail Bazar under Ishania Union No. 2 of Bochaganj Upazila in Dinajpur and vandalized the Shiva and Kali idols of the two temples.

April 29: Bikash Chandra Ghosh in Satkhira district was attacked by 35-40 people with the intention of grabbing his five bighas of land.

(This article was first published on the New Indian Express on 9 May, 2020 and is being reproduced here)