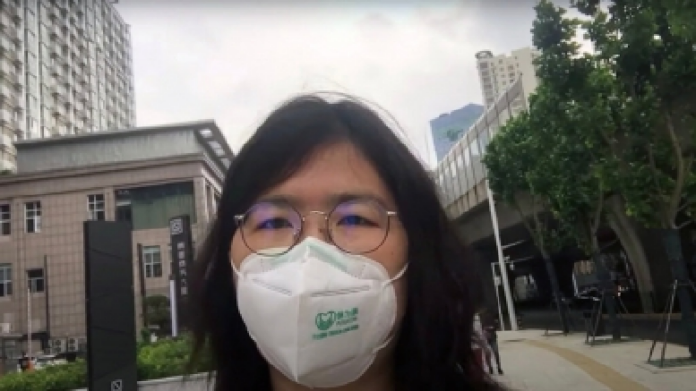 Detained Chinese journalist Zhang Zhan has been nominated for the Reporters Without Borders (RSF) press freedom award for courage in recognition for her work reporting from Wuhan in the early weeks of the Covid-19 pandemic, as calls grow for her release, The Guardian reported.

The former lawyer-turned-citizen journalist was convicted in December last year for “picking quarrels and causing trouble”, a ubiquitous catch-all accusation frequently used against journalists, lawyers and dissidents in China, the report said.

Zhang was sentenced to four years in jail. She had already been in detention since her initial arrest in May 2020, and has been on hunger strike. Last week, her family said the 38-year-old was “close to death”, amplifying global calls for her immediate release.

In its nomination on Monday, RSF said Zhang had withstood “constant threats from the authorities” in order to livestream her video reports from Wuhan’s streets and hospitals and show the harassment to which families of Covid-19 patients were subjected.

“Widely shared on social media, her reporting was one of the main sources of independent information about the health situation in Wuhan at the time,” it said, as per the report.

Zhang, who was among a number of journalists arrested in Wuhan but was the first to be convicted, was accused of having sent “false information through text, video and other media through the internet media such as WeChat, Twitter and YouTube”, and having “maliciously speculated” during interviews with foreign press, according to the indictment sheet.

Zhang is being held in Shanghai. Last week, her brother said on Twitter that she was severely underweight and “may not live for much longer”. He said Zhang, who is about 5ft 10in (177cm) tall, weighed only 40 kg.

“Zhang Zhan represents the hope of the Chinese people that some will keep doing journalism. That they go where something happens and keep reporting. The Chinese people, like every person on Earth, crave information on what’s happening around them,” Alviani said.

“The Chinese regime should never have judged her. She should be celebrated as a hero – she risked her life going to Wuhan at a moment when no one really knew what was going on,” he added.