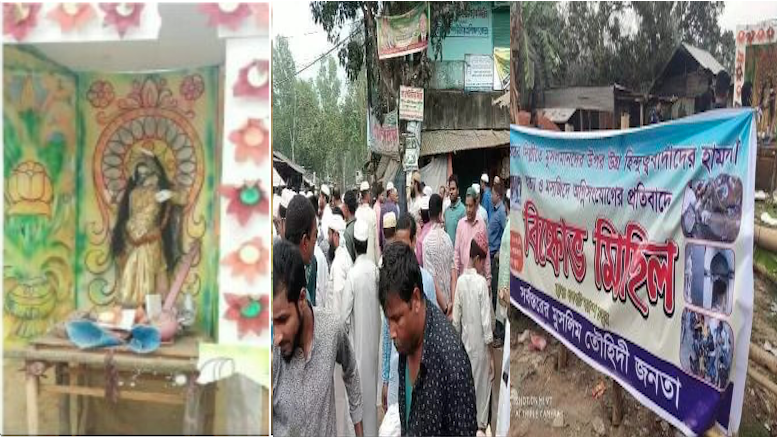 A Maa Durga temple was attacked & Maa Saraswati murti was vandalized by an Islamist mob under the banner of ‘Muslim Tawhidi people of all walks of life’ at Patiya sub-district in Chattogram (formerly Chittagong) district of south-eastern Bangladesh after Muslim Friday prayers on March 6, 2020.

Hindus of the area have been living with fear & insecurity since the attack took place, Assam based trilingual online news-portal Northeast Now has reported in its Bengali edition on March 8, 2020.

Their provocative slogans can be translated roughly as, ‘Grab a couple of Hindus, have breakfast (with their flesh) in the morning and afternoon, beat Narendra Modi with shoes on both cheeks,’ etc.

The temple committee filed a case with police & police has arrested two accused – Md. Farid, son of Abul Kasem and Md. Manik, son of Abdur Rahim. They were sent to police custody by the court on Saturday, police officials said. It is also alleged that the detainees have a strong connection with the local Awami League MP Shamsul Haque Chowdhury.

Minority rights organisation Bangladesh Hindu-Buddhist-Christian Oikya Parishad (unity council) General Secretary Rana Dasgupta visited the spot & demanded the punishment of perpetrators. Officer in charge of Patiya police station, Md. Borhan Uddin said, ‘We have arrested two perpetrators. All those who are involved will be brought under the law.’

Posters used by the jihadi mob show photos of Delhi riots, which indicate that the riots are being used as a pretext by Islamist elements in Bangladesh to undertake another round of anti-Hindu violence. Mainstream media in Bharat and the Western world has created a false narrative of the Delhi riots being a state-sponsored Muslim pogrom, whereas the reality is that the riots were planned well in advance by Islamist radicals protesting CAA-NRC and violence erupted in Delhi on eve of US President Trump’s for maximum international coverage.

‘Secular’ (dhimmi) Hindu analysts will latch on to such mob violence to argue that by passing CAA, Bharat has endangered the lives of Hindus and other minorities in Bangladesh, Pakistan and Afghanistan. But what their ‘analysis’ conveniently ignores is that persecution of religious minorities in these Islamic nations has been happening round the clock, even before CAA was passed and irrespective of actions by Government of Bharat. Ignoring the ground reality of Hindu persecution in these Islamic nations will not help buy peace in the sub-continent. The menace of Islamic supremacism can only be countered by calling it out boldly, and building global public opinion against it. CAA is the first step in this long-drawn battle.