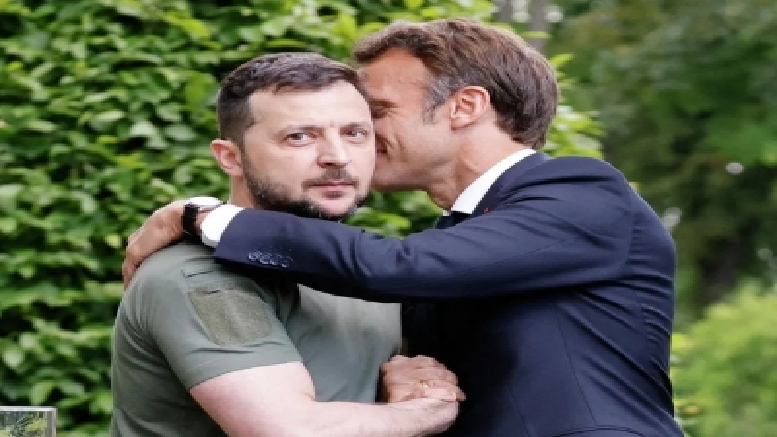 A big statement by Ukraine’s President Vladimir Zelensky about his determination to recover the lost territories of Donbas in the next three to six weeks has raised eyebrows across the globe.

Zelensky’s assertion of launching a massive counteroffensive in the south, has been carefully timed. The Ukrainian President chose June 28 – the eve of the Day of Ukrainian Statehood, when nationalistic fervour runs high–for his major declaration.

But what is the real backstory that is persuading Zelensky to announce that he was now set to radically change the course of the six-month military campaign with Russia, which began in late February this year?

Is Zelensky making his move because Ukraine has already lost control over 20 per cent of its territory, which not only includes a large part of the unrecognised republics of Donbass, but also the Kherson and Zaporozhye regions. As a result of his military setbacks, does he think that his political survival is now at stake?

In fact, Ukraine has lost the strategically important southeast, where one of the largest nuclear power plants in Europe is located.

This is also a region that opens the way to the Black Sea, which is inscribed in the new NATO strategy as a priority zone on the southern and eastern flanks of the North Atlantic Alliance.

It is here that Zelensky, who recently received American HIMARIS and other weapons and is waiting for new arrivals, plans to “kick Russia in the teeth”. He is also trying to assemble a one million strong army, mobilising people as old as 60.

Therefore, has a point of inflection, a now or never situation for the Ukrainian President, been reached in the Ukrainian conflict?

In all likelihood, Zelensky is feeling the heat from the West. Having invested so much money and weapons and putting its international prestige on line, the West badly wants Kiev to record a decisive victory over Russia, instead of staring at defeat.

Unsurprisingly, in his major address in the last week of July to raise national morale, Zelensky called for a unified response to stand up to Russia.

Ironically, the events of the last weeks and days show that internal cohesion may be falling apart in Ukraine.

Deep fault lines are emerging in Ukraine’s political and military elite. In fact, President Zelensky is waging his war on two fronts simultaneously-one of course is against Russia and the other is supposedly against so-called “internal enemies”.

Zelensky has therefore launched mega-purge that is targeting the pillars of the Ukrainian state–security forces, law enforcement officers, oligarchs who have huge resources and capabilities to build a phalanx against Russia. Many in the firing line today have been, until recently, part of President Zelensky’s inner circle.

The first two heads to roll a fortnight ago were that of Ivan Bakanov (a former bosom friend of the president) the head of the Security Service of Ukraine. The other to fall from grace was Prosecutor General Irina Venediktova. Both were fired in a single day. The duo was charged with high treason and collaborationist activities.

On the same day the State Bureau of Investigation (GBR) of Ukraine announced the arrest also of the former head of the Security Service of Ukraine in Crimea Oleg Kulinich, who had worked as an assistant to Ivan Bakanov before his detention.

Oleg Kulinich was charged under three articles of the Criminal Code of Ukraine – high treason, leadership of a criminal organisation or participation in it, aiding in the transfer of data that is a state secret to another country.

According to leaks in the Ukrainian media, Kulinich and former Deputy Secretary of the National Security and Defense Council of Ukraine Vladimir Sivkovich are suspected of “surrendering the south of Ukraine to Russian troops.”

According to the newspaper Observer, “it was Kulinich,who played a big role for ensuring the rapid occupation of the southern regions of Ukraine by concealing counterintelligence information about the Russian offensive from Crimea “from the leadership of the Security Service of Ukraine.”

Following the dismissal of Ivan Bakanov, decrees on the change of the leadership of the Security Service of Ukraine immediately followed in five key regions of the country – Kharkiv, Sumy, Poltava, Transcarpathian, Dnipropetrovsk regions.

The cascading purge coincides with the failure of the Main Intelligence Directorate (GUR) of Ukraine’s Ministry of Defence, which unsuccessfully tried to recruit Russian pilots and persuade them to hijack combat aircraft of the Russian aerospace forces. The operation of the Main Intelligence Directorate of Ukraine was stopped by the Federal Security Service (FSB) of Russia.

Russian pilots, who refused to be financially seduced, were offered $ 1 million and citizenship in one of the European countries if they were ready to hijack combat aircraft, the pride of the Russian military space forces.

However, paradoxically, the head of the Main Intelligence Directorate of the Ministry of Defence of Ukraine, 36-year-old Kirill Budanov, not only was not fired, but got a promotion.

“I made important personnel decisions. In particular, the head of the Main Intelligence Directorate, Kirill Budanov, will also head the intelligence committee under the President of Ukraine,” President Zelensky said this Monday in a video message published on his Telegram channel.

And finally, the icing on the cake is the deprivation of Ukrainian citizenship of the powerful Ukrainian oligarch and uber nationalist Igor Kolomoisky. Back in 2014, Igor Kolomoisky used his own money to create Ukrainian volunteer battalions in the Donbass to fight the separatist republics.

After that, it was he who played a decisive role in the sensational victory in the 2019 presidential election of Vladimir Zelensky, who at that time was a comedian and had no political experience.

Against the backdrop of the torrential purge, there appears to be a massive competition with the Ukrainian elite to curry favour with the West.

The names include Petro Poroshenko, a former President, who has his own channels of communication with the United States and Europe. But he is not the only one in the leadership fray. Many of Zelensky’s rivals have not come out of the shadows, waiting for the decisive moment to deliver a fatal blow to Zelensky, today’s protege of the West. Will a flawed Ukrainian offensive provide that decisive moment when the knives are really out for Zelensky?