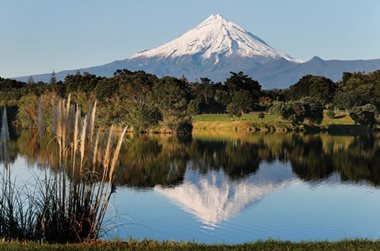 In view of Playboy model nude photo-shoot on sacred Mount Taranaki, Hindus are urging New Zealand government to offer effective protection to indigenous Maori sacred sites and make sure those were not disrespected in the future.

Rajan Zed, President of Universal Society of Hinduism,  in a statement in Nevada (USA) today said that Mount Taranaki was of enormous spiritual significance to Maori people and its inappropriate usage for any other agendas was not okay as it might be hurtful to the believers.

The world and New Zealand should respect the millenia old Maori religion-spirituality-traditions-concepts, which should not be taken frivolously. Symbols of any faith, larger or smaller, should not be mishandled, Rajan Zed indicated.

Zed termed this nude photo shoot on Mount Taranaki as “highly inappropriate” and added that faith was something sacred and attempts at trivializing it could be disturbing to the faithful.

Moreover, the Maori community should be offered an effective role in the decision making authority of Mount Taranaki and they should be the ones to finally decide whether to allow public climbers on it or not and what should be okay/allowed on the mountain, Rajan Zed noted.

New Zealand Government Department of Conservation site states—“Mt Taranaki has great spiritual significance to local Maori: the crater and summit is the sacred head of Taranaki, the rocks and ridge are his bones, rivers his blood and plants and trees are his cloak and offer protection from the weather. Respect the mountain. Do not stand directly on the summit stone…”

According to New Zealand Government’s “Te Ara—The Encyclopedia of New Zealand”—“For the Māori of the Taranaki region, Mt Taranaki (Mt Egmont) was a sacred place which they dared not climb.”

The Māori are the indigenous people of New Zealand. The ancestors of the Māori are believed to be a Polynesian people originating from south-east Asia, but some anthropologists claim that the Polynesians arrived in the Pacific from America. The exact date of Polynesian settlement of the islands of New Zealand is also unknown. Although previously thought to have been between 950 -1130 CE, scholars now debate that the first Polynesian settlement happened much before.

From the 18th century onwards, Europeans were active in various trades around New Zealand. Britain annexed New Zealand through the Treaty of Waitangi, an agreement in 1840 between the British Crown and various Māori chiefs. Although major differences between the Māori and English language versions of the Treaty make it difficult to ascertain exactly what was promised to who, the Treaty essentially gave the British the right to establish a governor in New Zealand, stated the rights of the chiefs to ownership of their lands and other properties, and gave Māori the rights of British citizens. Although the Treaty is generally seen as marking the beginning of the New Zealand nation, it was largely ignored for more than a century after its signing, and various legal judgements ruled it irrelevant to New Zealand law and government.

This treat has always been a major focus of Māori protest. In the century after 1840 Māori lost possession of most of their land to Europeans and in many cases the transfer was legally and/or morally dubious. The Māori protest movement, a broad indigenous rights movement emerged in the early 1970s with focus on issues such as the Treaty of Waitangi, Māori land rights, the Māori language and culture, and racism.

The 1867 Native Schools Act decreed that English should be the only language used in the education of Māori children. As Maoris urbanised, many parents felt that it was much more important for their children to be fluent in English and made no attempts to pass on the language. This resulted in a major cultural loss, and today attempts are being made to revive the Maori language.

The Maori struggle to reclaim their land and preserve their culture continues to this day, although the position of Maoris in contemporary New Zealand society is far better than the pathetic state of indigenous Aborigine people in neighboring Australia.

Hindus share many similarities with the native Maoris of New Zealand – attitudes to nature, language and culture – and we also have a shared struggle against the globally dominant Abrahamic creeds and notions of Western Universalism.

Such Western insensitivity for indigenous cultures can be seen across the world – whether it is a Maori sacred site, sacred rocks in Hawaii, treatment of Aborigines in Australia or the attacks on Hindu traditions and temples in Bharat. The notion that the West is somehow inherently superior to other beliefs and cultures across the world is deeply ingrained in the Western psyche.