A suicide bomber targeted a convoy of Sikhs and Hindus on their way to meet Afghanistan’s president in the eastern city of Jalalabad on Sunday, killing at least 19 people, various media outlets have reported –

“Inamullah Miakhail, spokesman for the provincial hospital in Nangarhar, said that 17 out of 19 dead in the attack are from the minority Sikh and Hindu community.

Miakhail added that at least ten of 20 wounded were also from the same minority community and are undergoing treatment at a Jalalabad hospital.

Narendr Singh, one of the wounded Sikh form Sunday’s attack, told to The Associated Press by phone from his hospital bed in Jalalabad that the attack targeted their convoy. He cried on the phone worrying what had happened to his father, Avtar Singh Khalsa, who was also in the convoy.

Miakhail confirmed that Khalsa, a longtime leader of the Sikh community who had planned to run in the parliamentary elections set for October, was killed in the attack.

Attahullah Khogyani, spokesman for the provincial governor, said that a number of and shops vehicles caught fire as result of the attack.

Gen. Ghulam Sanayee Stanekzai, Nangarhar’s police chief, said that the attacker targeted the group on its way to the governor’s compound. They had planned to meet with President Ashraf Ghani, who was visiting the region on Sunday.

No one immediately claimed responsibility for the attack, but the Taliban and an Islamic State affiliate are active in the province.

Sikhs and Hindus have long suffered widespread discrimination in the conservative Muslim country and been targeted by Islamic extremists. The community numbered more than 80,000 in the 1970s, but today only around 1,000 remain in the country. Under Taliban rule in the late 1990s, they were told to identify themselves by wearing yellow armbands, but the dictate was not wholly enforced. In recent years, large numbers of Sikhs and Hindus have sought asylum in Bharat, which has a Hindu majority and a large Sikh population.”

Other sources say that Islamic State has claimed the attack.  President Ghani’s spokesman said the president was still in Nangarhar but was “away from danger”. Ghani arrived in Jalalabad earlier Sunday to open a hospital, part of a two-day visit to the province bordering Pakistan. 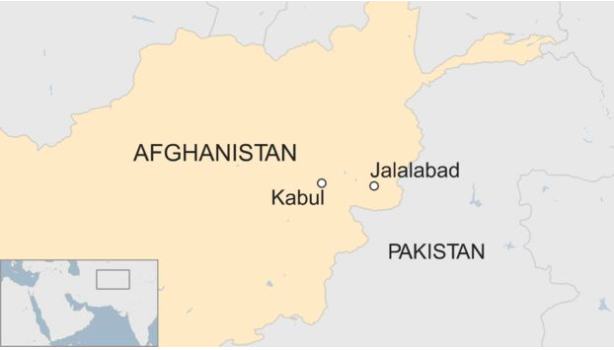 The Delhi Sikh Gurdwara Management Committee has released names of those victims, whose identities have been established. External Affairs Minister Sushma Swaraj is slated to meet the families later on Monday evening. Delhi Sikh Gurdwara Management Committee has urged the government to make security arrangements for the Sikh and Hindu community in Afghanistan.

We have not been able to find the name of the Hindu victim(s) of this barbaric attack, and will update this news story once we have additional information. Meanwhile, the Indian Embassy in Afghanistan has also condemned this attack –

1/2 We strongly condemn the henious and cowardly terrorist attack in #Jalalabad today evening which resulted in the death of 20 innocent Afghans, including 10 members of the Afghan Sikh Community, and injured more than 20 persons.