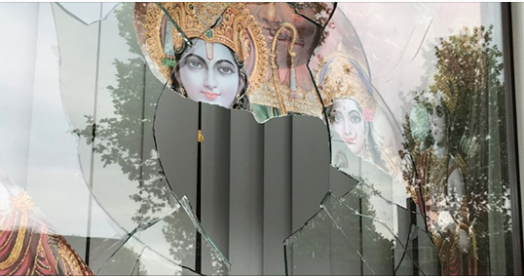 A Hindu temple in The Hague was vandalised overnight Tuesday. The chairman of the temple tells regional broadcaster Omroep West, that the act was intentional.

Chairman Siddarth Ramdhani, says the temple is a mess. The windows were broken by several large stones that were found inside. They were probably thrown from a fairground opposite the temple.

“They had to make considerable effort, because both windows are double glazed,” Rhamdani says.

He thinks the temple was ‘deliberately targeted’ because it has been vandalised during Ramadan before. “Not only during Ramadan, but also during our own religious festivities youths are harassing us,” he says.

The Hindu temple is in The Hague’s notorious “Schilderswijk” area, known for being a hotbed for jihadists and ISIS sympathisers.

In 2014 a large anti-Israel and pro-ISIS demonstration took place in the area. Afterwards several radicals were arrested and sentenced by a Dutch court for being members of a criminal organisation with terrorist goals.

(This article first appeared on VoiceOfEurope.com)