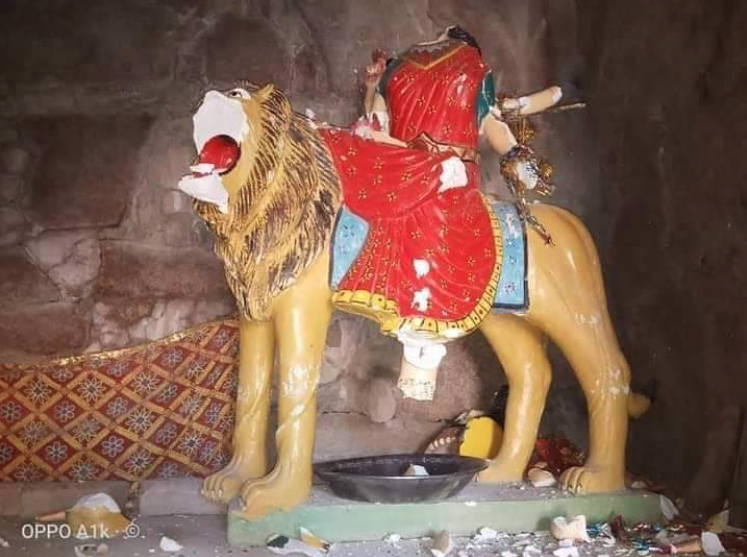 Another shocking desecration of the few remaining Hindu temples in Pakistan has been reported, this time on the festive occasion of Navratri.

As per Pakistani journalist Naila Inayat, the murti (she has incorrectly termed it an ‘idol’ in her tweet) of Maa Durga on her lion mount in a temple in Nagarparkar, district Tharparkar, Sindh province, was desecrated soon after Hindus held Navratri prayers.

Such desecrations of Hindu temples are common in Pakistan, Bangladesh and even in many parts of Bharat, as we are currently witnessing in Andhra Pradesh. The root cause for this anti-Hindu bigotry is the injunction against so-called ‘idol worship’ in Islam and Christianity, something which scriptures of both Abrahamic religions claim is an unpardonable sin.

This religious intolerance is deeply encoded even in mainstream Western society, where Hindu Dharma is often presented as a weird, incomprehensible religion where ‘people debase themselves before stone images and practise arcane rituals’.

Hence, orthodox Muslims and Christians condone such hateful acts, as they believe their religion mandates them to end ‘idolatry’ and bring Hindus out of jahilya/darkness. Sadly, many urban Hindus are victims of propaganda that hides this anti-Hindu bigotry and teaches that it is Hindus who need to become more tolerant of Islam and Christianity! Worse, many such HINOs (Hindu in Name Only) urbanites are so clueless about Dharma due to decades of deracination and secularisation by academia, media, Bollywood movies like PK etc. that they believe the propaganda against ‘idol-worship’ and have no clue what murti puja really means.

As the perceptive Twitter handle @TrueIndology informs us, Nagarparkar is the last remaining Hindu majority taluka in Pakistan, and such attacks are meant to annihilate the last remaining Pakistan Hindus. Read this article about the plight of poor, marginalised Hindu communities like Bheels, Meghwar, Kolhi, Jogis and others living in the Tharparkar district which borders Bharat, and how the Pakistani state discriminates against them.

Tragically, this genocide of Pakistani Hindus, which usually manifests itself in three inter-connected ways – abduction of minor Hindu girls for sex slavery and/or forced conversion; desecration of Hindu temples; violence & institutionalised discrimination against Hindus – is forcing them to either convert en-masse to Islam or seek refuge in Bharat.

The world is sleeping as this human tragedy unfolds before our eyes. And the dominant left-liberal intelligentsia of Bharat also cynically ignores this reality and instead is busy spreading anti-Hindu bigotry and opposing humanitarian laws like CAA which offer some respite to persecuted Hindu refugees from Pakistan.