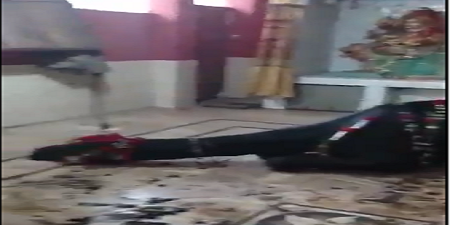 A shocking video has been shared on twitter by a Pakistani journalist which shows a Hindu Maa Durga temple near Karachi airport being used to house sacrificial animals for the recent Muslim festival of Eid.

Hindu temples in Pakistan are under constant attack from Islamist fanatics & land grabbers and are actively discriminated against by the Pakistani State using Government organizations like Evacuee Trust Property Board.

But most such incidents go unreported. Only a few Pakistani media outlets cover the plight of the hapless Hindu minority in Pakistan. Here is one such report –

This article lists some of the prominent surviving temples in Pakistan – even these are mostly in dilapidated condition or on the radar of Muslim land grabbers.

A survey conducted in 2014 by the All Pakistan Hindu Rights Movement (PHRM) revealed that only 20 Hindu temples, out of the 428 places of worship which existed at the time of partition, are operational.

“The remaining places of worship have been leased for commercial and residential purposes by the Evacuee Trust Property Board (ETPB)”, said PHRM Chairman Haroon Sarab Diyal. The 135,000 acres of land owned by around four million Hindus is now under ETPB’s control. 408 temples have been converted into toy stores, restaurants, government offices and schools after 1990.

Pakistani Hindus are arguably the most persecuted minority community in the world, but strangely their plight is hardly noticed across the world, including in Bharat – the only homeland of Hindus. Even accounting for the fact that Pakistan is an “Islamic Republic”, and hence gets a waiver from being judged by the secular standards which modern civilization demands, isn’t a State supposed to guarantee some basic fundamental rights to all citizens?

And not surprisingly, Pakophiles who live on Bharatiya soil like Barkha Dutt, Karan Thapar, Naseeruddin Shah, Mani Shankar Aiyer and others are completely silent on this issue. Is this the definition of “great neighbour to have” in the words of Shah Rukh Khan expressing his disappointment at Pakistani cricketers not being picked in IPL 2009 auction, held just months after the 26/11 Mumbai terror attack?