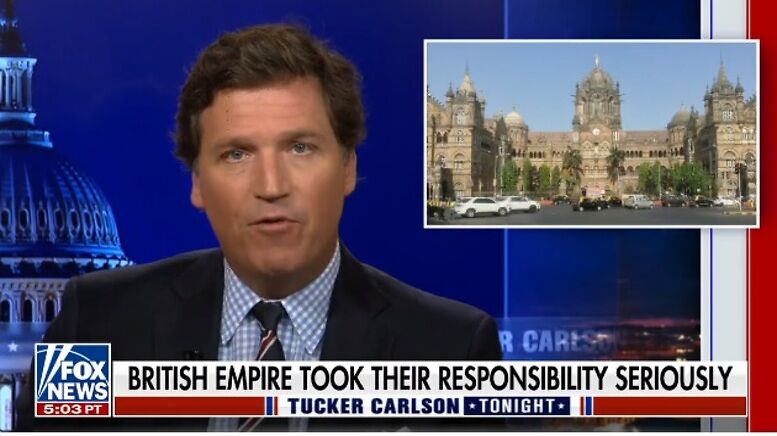 Saddened by British Queen Elizabeth’s demise, American conservative news anchor Tucker Carlson decided to grieve by lashing out at those he claimed were ‘smearing the British monarchy and empire’. While the Fox News anchor does a good job in busting American left-liberal propaganda outlets like NYT, he is also an unabashed White supremacist. Carlson’s loyalty for Anglo-Saxon traditions shows in his affinity for the British monarchy.

But in his almost blind admiration for the deceased Queen, the American journalist glibly forgot the bloody past of British imperialism and colonialism. Listen to his heart-felt eulogy for Queen Elizabeth, which quickly descended into a racist rant that can be summarized as ‘uncivilized people were blessed to be ruled by the benign British empire’.

Carlson’s rose-tinted assessment of the British Empire meant he deliberately chose to ignore every brutality, bloodshed, and loot committed by the Brits for centuries. The British royal family may have undergone a modern makeover, but their legacy is a trail of bodies across continents. And unlike the American anchor blinded by his kinship for the English way of life, not every country and its citizens are ready to forgive and forget the brutalities meted out by the British.

Upset that some former British colonial subjects didn’t share his sorrow on the Queen’s demise, Tucker Carlson went on a crazy and ill-informed rant.

“When the British pulled out of India, they left behind an entire civilization (sic), a language, a legal system, schools, churches, and public buildings, all of which are still in use today. Here’s the train station the English built in Bombay (Mumbai), for example. There’s nothing like that in Washington DC, right now, much less in Kabul or Baghdad. Today, India is far more powerful than the UK, the nation that once ruled it, and yet, after 75 years of independence, has that country produced a single building as beautiful as the Bombay train station that the British colonialists built? No, sadly, it has not. Not one,” Carlson said with smug self-assurance typical of a White supremacist.

He is wrong. The British didn’t leave behind any “civilization” we could take pride in. Nor could we care less about the cultural baggage they left behind. The language, legal system, churches and the convent schools the Brits left have added little to Bharat; on the contrary, they are still holding back Bharatiyas from rediscovering their true civilizational genius, long after the colonizers are gone. Self-alienated descendants of the native elites that the British trained to do their dirty work for them continue to suffer from the same debilitating mental colonization. They continue to peddle the same colonial tropes and remain detached from the masses.

Most Bharatiyas today wish the British had taken back the churches and convent schools built on prime urban land that they appropriated and leased to their local lackeys. But instead, the British decided to ‘take away’ (aka loot) our gold, diamonds and jewels like the Kohinoor. That’s what they should have left behind, if there was a shred of integrity in the British Empire.

It is also revealing that Carlson says, “The British did not commit genocide, except arguably against the Dutch during the Boer War”. Of course, only Whites count as true humans in the eyes of people like Carlson, so he is oblivious to the massacres the British carried out in Bharat in the 150 years preceding the Boer War in South Africa. The worst atrocities occurred after the First War of Independence in 1857, when entire villages were depopulated and the genocide justified as “moral effect of violence….a necessary part of the civilizing mission and the white man’s burden”. In fact, it is the lessons the British learnt from their repressive tactics in Bharat which they applied against the Dutch Boers.

The amount of barbarity the British committed on Bharat and other colonies in just the 20th century is itself spine-chilling and cannot be summed up in a single article – the Jallianwala Bagh massacre, Bengal famine manufactured by Churchill, the tormented screams of political prisoners shipped off to Cellular Jail in Andaman…its a long and dreary list. Carlson might want to look up this new book “Legacy Of Violence: A History Of The British Empire” by American historian Caroline Elkins. Maybe he will find the research of a fellow White more believable?

Well, slavery might have been legally abolished in 1833 in most British colonies, but it continued in another name as ‘indentured servitude’ under which impoverished Bharatiyas continued to be shipped off to British colonial plantations in Fiji, Caribbean, Mauritius, South Africa for many decades after.

As for the ‘widow burning’ aka Sati – this was one of the most effective tropes that Christian missionaries utilized to justify converting ‘heathens’ to the ‘saving light of Christianity’. Those truly interested in understanding this topic should read Meenakshi Jain’s seminal work “‘Sati: Evangelicals, Baptist Missionaries, and the Changing Colonial Discourse”. Sati was always rare in Bharat, and even the widows who chose to self-immolate were often dissuaded by family and priests. The thousands of ‘witches’ and ‘heretics’ that were burnt or executed in Christian Europe and America between the 15th and 18th centuries (by which time Protestant Christianity, which Carlson alludes to as a ‘civilizing force’, was widely prevalent especially in America) completely outnumbers Hindu women who ever committed Sati.

The physical and cultural genocide wreaked by Christian proselytization – both Catholic missionaries and Protestant evangelicals – is incalculable. This supremacist religious doctrine went hand in hand with the European colonial project, providing the ‘divine’ justification for colonial loot and plunder in Americas, Africa, Asia and Australasia. Do we need to remind Tucker about the religious underpinnings of the doctrine of ‘manifest destiny‘ that was used to colonize entire North America? Today, this Christian evangelism has taken on a new, equally dangerous form, and we in Bharat see its deleterious impact and the harm it does to social harmony and religio-cultural diversity each day.

Coming to one of the questions Carlson directed to Bharatiyas, “has that country produced a single building as beautiful as the Bombay train station that the British colonialists built?”. First off, Tucker, its been Mumbai and not ‘Bombay’ for 27 years now – do catch up. Second, Bharat has been producing architectural marvels millennia before the medieval-era Renaissance finally pulled Europe out of the Vatican-inspired Dark Ages.

Despite centuries of Islamic invasions and accompanying temple destruction, enough Dharmic heritage survives to tell us of what Bharatiya civilization produced at its peak.

The ruins of Hampi in Karnataka, the Konark Sun temple in Odisha, and Dilwara Temples in Rajasthan are just a few among hundreds of masterpieces that boast the perfect blend of devotion, science and architecture. The Veerbhadra temple in Andhra Pradesh constructed in 1530-45 CE, with its 70 pillars – one hanging from the ceiling defying gravity – is another engineering wonder.

The Ranakpur Jain Temple, built in the 15th century, can put Buckingham Palace to shame. But then it’s impossibly hard to shame the British – their palaces and British Museum are filled with stolen loot which they blithely refuse to return.

Now, because Carlson wanted to see buildings that were built after 1947 that match the CST (aka Victoria Terminus) train station in Bombay, netizens obliged him with glimpses of a few. Of course, for someone rooted in notions of Western supremacy, it might be hard to see beauty in structures that don’t conform to Western aesthetics.

Queen Elizabeth ascended to the British throne in 1952, by which time Bharat was already free. Bharatiyas bear no ill-will to the departed soul, but it is an undeniable fact that UK has yet to apologize for the crimes against humanity it committed in the name of ‘liberal imperialism’. Kenya’s Mau Mau uprising started in 1952 and UK crushed it with extreme brutality. The European island nation continued to tyrannize and exploit nations like Kenya (free in 1963) and Zimbabwe (free in 1980) while Elizabeth was the reigning monarch.

So dear Tucker Carlson, educate yourself. We understand that the shift in global power, after centuries of Western dominance, that is currently underway must be unsettling for your ilk. But such ill-informed, racist rants serve no purpose other than revealing your ignorance and inherent biases.