Dear Virat, can you please speak up for persecuted Kohlis of Sindh, Pakistan? 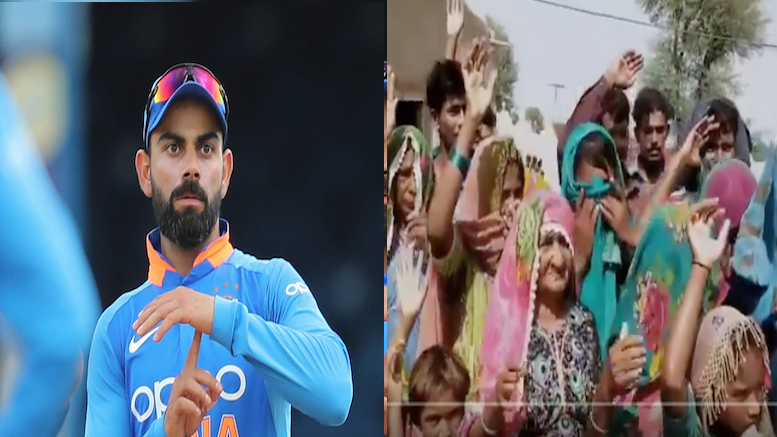 Dear Virat, we want to bring your attention to a matter where you can make a huge difference to the lives of poor persecuted Pakistani Hindus of the Kohli community just with a simple retweet-

Few days ago, the Kohli community was attacked in Umarkot, Sindh by Muslim neighborhood. Men and children were beaten, women were sexually assaulted but no action has been taken by the authorities against the culprits. #SpeakUpForPakMinorities pic.twitter.com/7kUD3HcHOy

One doesn’t need to understand the language these people are speaking to feel their pain – women, young and old, sobbing and pleading for justice with their hands held up is a universal language.

This is not to imply that these Kohlis are the same as your ancestral clan – they are most likely a Scheduled Caste/Tribe from Sindh, while as per our understanding you come from a Punjabi Khatri family. But they do share the same surname, and they are also Hindu – so just the symbolism if you support their cause would be huge.

You have fan following in Pakistan and are on good terms with many Pakistani cricketers – so if you stand up for the persecuted Pakistani Hindu community, it is bound to cause some churning and introspection within Pakistani society, where, tragically, such crimes have wide social acceptance.

In our desperation to seek bonhomie with Pakistan and chase the mythical ‘Aman ki Asha’, we have turned a blind eye to stark reality – the Pakistani state is a living hell for Hindus and other minorities. It is the true inheritor of Nazi Germany for the way it has carried out a genocide in 1971, systemic persecution of minorities like Hindus, Ahmadis, Christians, Shias, Baloch, and sponsored terrorism in Bharat and across the world.

Officially, Pakistani Hindus number around 3-4 million (1.85% of the total population) as per the last census conducted in 1998. Pakistan Hindu Council though claims there are around 8 million Hindus currently living in Pakistan, comprising 4% of the population. Many of these Hindus are Scheduled Caste (Dalit) who either lacked the resources to migrate to Bharat during partition, or fell for the Dalit-Muslim unity theory and stayed on in Pakistan. Today, while Dalits in Bharat have made significant strides in all fields and a new Dalit middle-class has arisen, their counterparts in Pakistan are living as human slaves. As this article says –

“Most of this population remains uneducated and immensely improvised. More than 75 percent of the Hindu-Dalit population in Pakistan remains illiterate. Individuals from Jathi, Sochi, Guwaria, Kabutra, Gahra, Rawra, Sansi, Jogi, Balmeke, Bagri, Lohar, Oad, Meghwar, Kolhi, and Bheel groups are referred as scheduled caste (Hindu Dalits). They form the most of the population in Pakistan’s Thar district located in the Sindh province. Feudal landlords control these rural areas and poverty; slavery is rampant in the region. As per one estimate, people from the marginalized groups mostly work as agricultural laborers, garment factory workers, or as sweepers in Pakistan. As they are socially excluded and economically marginalized, they do not even have access to primary health care.”

Please do not think the tweet we shared at the beginning of the article is a one off. Such organised attacks on poor, marginalized Hindus of Sindh are a routine occurrence; here are some examples from just the last few weeks – Exhibit 1, Exhibit 2, Exhibit 3, Exhibit 4. And it’s not just Dalits who face persecution in Pakistan, all sections of Hindu society, including well-off school principals, traders, students are all targets of Islamists with tacit compliance of the state.

Mysterious ‘suicides‘ of Hindu men and boys are also quite common. We will not even go in to the abduction, rape, forced conversion and ‘marriage’ of Pakistani Hindu and Christian girls – those cases, at least, are now being discussed outside Pakistan and we hope you might have heard few names like Rinkle Kumari, Kajal Bheel, Raveena and Reena (sisters), Mehak Kumari, Huma Younus by now. By the way, a married Hindu woman Kavita was abducted in Badin, Sindh on 6th August from her home and has now been converted and married to her abductor Muhammad Adil – just another normal, routine day in the Islamic Republic of Pakistan.

We know you are a big proponent of fighting fake news and shot a #MatKarForward public-interest message with movie actors against ‘spreading hate’ during the Covid-19 lockdown. So we want to assure you that the video of the poor Kohli Hindus from Kunri, Umarkot district, Sindh is absolutely genuine – here is another video shot by eyewitness on 4th August when the attack was actually taking place.

The handle @voice_minority has been corroborated by a reputed, blue-ticked Pakistani journalist Veengas J. Even the Hinduphobic New York Times has had to accept the grim reality of Pakistani Hindus being forced to abandon their ancestral faith and convert to Islam – although it has, not surprisingly, diluted such conversions as a step to improve economic and social status rather than the direct result of inhuman persecution.

When Jagjit Kaur, the daughter of a granthi from Nankana Sahib, Pakistan, was kidnapped and forced to convert to Islam and marry a Muslim man last year, the entire Sikh community including Punjab CM Amarinder Singh and cricketer Harbhajan Singh stood up to demand that the girl be rescued:

This need to stop here.let’s not get there.every religion is beautiful.don’t force anyone to convert in any..GOD is one..let god only decide which religion we born in.don’t try to become god yourself.strict action should be taken towards this @ImranKhanPTI @DrSJaishankar https://t.co/a3kLDCgsfh

Their pressure and appeals forced the top-levels of Pakistani government to look into the case and the girl’s family got some hope. Although the case later took a predictable turn with the girl being sent to a shelter home, where she remains to this day. There was also a mob attack on Nankana Sahib Gurdwara in January to force police to release the abductor.

So dear Virat, please lend your voice to raise awareness about the plight of poor Hindus of Pakistan. It will take just one retweet. It won’t change the mindset of a fascist, theocratic state like Pakistan, but it will awaken Bharat and the world to a slow genocide happening right in front of our eyes. Your brand managers will probably advise you to avoid such ‘controversial’ topics, but in the long run such a conscientious act will only boost your image as a person of integrity who dared to speak the truth when others were being politically correct.