Covid-19 vaccine rollout is “India’s gift” to the world: US scientist 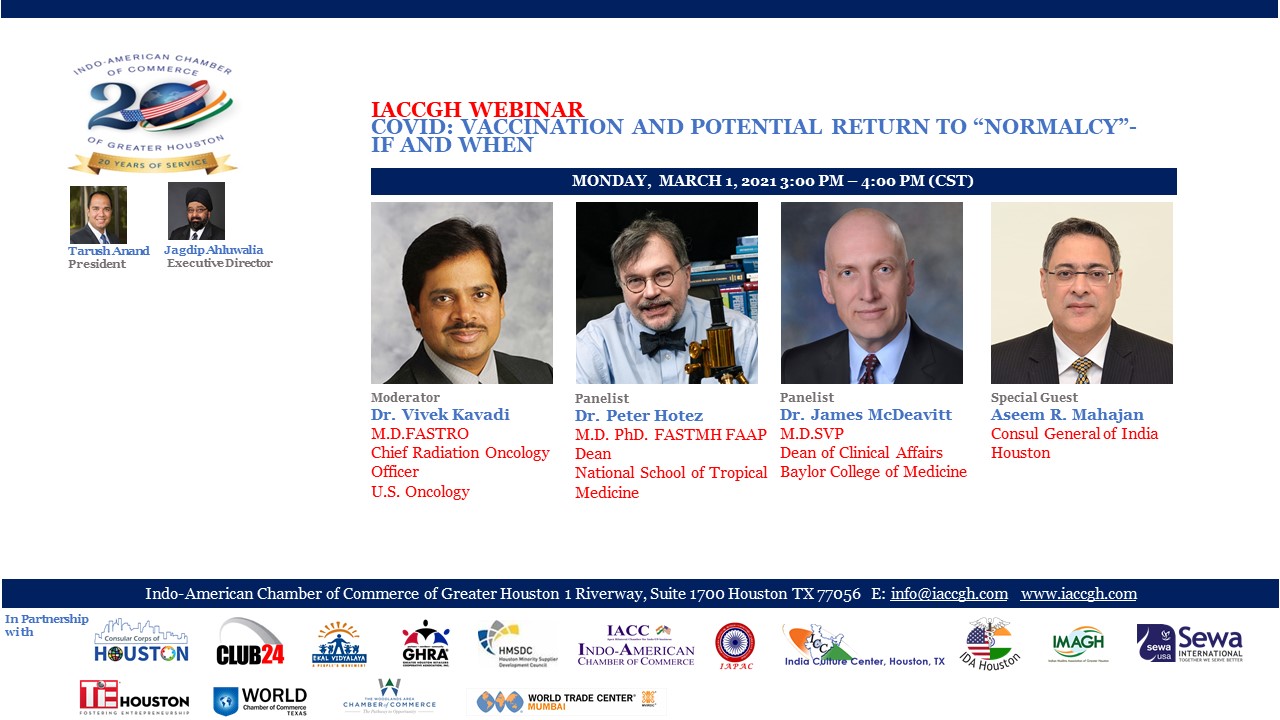 The discussion focused on “COVID-19: Vaccination and Potential Return to Normalcy – If and When” and tracked the outcome of the vaccine rollout underway across the country.

Consul General of India in Houston Aseem Mahajan participated as a special guest.

Welcoming the attendees, Executive Director Jagdip Ahluwalia highlighted the chamber’s mission of providing relevant and timely information to its members and partnering organizations while President Tarush Anand spoke of the chamber’s ongoing efforts to strengthen the bridge between the medical community and mainstream business as well as between Houston and India.

Describing vaccines as “one of the highest expressions of science in pursuit of humanitarian goals,” Chief Radiation Oncology Officer, US Oncology Dr. Vivek Kavadi noted that since the first dialogue with leaders from the Baylor School of Medicine in April 2020, over 28 million people had contracted the virus in the US and more than half a million Americans had tragically died.

Lives and businesses had been upended but the breakthrough on the vaccine front has been one reason for cautious optimism. More than 73 million vaccines doses have been administered to date. 15% of the population has received one dose while 7% have received both doses.

Dean of the National School of Tropical Medicine, Baylor College of Medicine Dr. Peter Hotez, whose lab is collaborating with premier Indian pharmaceutical companies on a low cost vaccine, applauded India’s tremendous vaccine making capacity and its huge contribution to the world.

Tagging it as “India’s gift to the world,” he observed that the two mRNA vaccines may not impact the world’s low and middle income countries but India’s vaccines, made in collaboration with universities such as Baylor College of Medicine and Oxford University, have “rescued the world” and its contributions must not to be underestimated.

This, he stated, will be remembered “as a time when India really stepped up in a major way as a global player.” Dr. Hotez added that he felt compelled to make this statement because “it’s a story that’s not really getting out in the world.”

He also noted mounting evidence that vaccines not only “interrupt symptomatic illness and keep you out of the hospital” but halt asymptomatic transmission as well. However, a troubling development is that the vaccines work well against the UK B.1.1.7 variant now accelerating across the US but doesn’t work quite as well against the variant coming out of South Africa.

It is likely that all vaccines will require a booster because the durability of protection for the vaccines is unknown and to create an added immune response that’s targeted at the South African variant. The winter storm that hit Texas and the resulting power grid collapse unfortunately put Texas “at the bottom of the nation in terms of vaccinations.”

Regarding reopening of schools, the priority, he stated, should be to get teachers and the school staff vaccinated as quickly as possible.

Thanking Dr. Hotez for his unstinting tribute to India’s efforts in getting the vaccines out to the world,  Consul General Aseem Mahajan observed that India was “running one of the largest vaccination drives in the world.” He expressed his pride that India is not only the biggest producer of generic drugs, has the largest number of FDA approved facilities but is the largest vaccine manufacturer in the world producing millions of doses.

More importantly, in  keeping with its “tradition of sharing with the world,” India has exported these vaccines to many countries. He also noted the upswing in the medical partnerships emerging between the US and India in this pandemic. In terms of medical devices manufacturing, India is one of the largest destinations in Asia and many American companies have  expressed an interest in collaborating with India on this front.

Senior Vice President and Dean of Clinical affairs at Baylor College of Medicine Dr James McDeavitt has been leading the college’s operational response to COVID-19. Certain practices, he explained, will linger such as masking for travel, shopping or the workplace during cough and cold bouts.

Telehealth will also be durable as it’s more convenient and cost effective. It will work better in psychiatric disease and behavioral health issues as there’s less stigma to receiving counseling and cognitive behavioral therapy through telehealth links.  It will also give rise to virtual medical tourism as one can now get a second opinion from a world expert in the comfort of their own home and for a lot less.

Regarding which of the three vaccines – Pfizer, Moderna and Johnson &Johnson is the least effective, he stated that they are all 100% effective in preventing severe illness, hospitalization and death and advised the attendees to get the first available vaccine.  Those with multiple medical problems should continue to practice a degree of caution when getting together with those who have been vaccinated because there’s still a chance of transmission.

In response to a question about air travel, Dr. McDeavitt stated that the installation of HEPA filters in airplanes have made domestic travel relatively safe but recommended double masking – a cloth mask over a surgical mask and a plastic face shield for extra precaution. He also cautioned travel to countries where the virus was still surging.