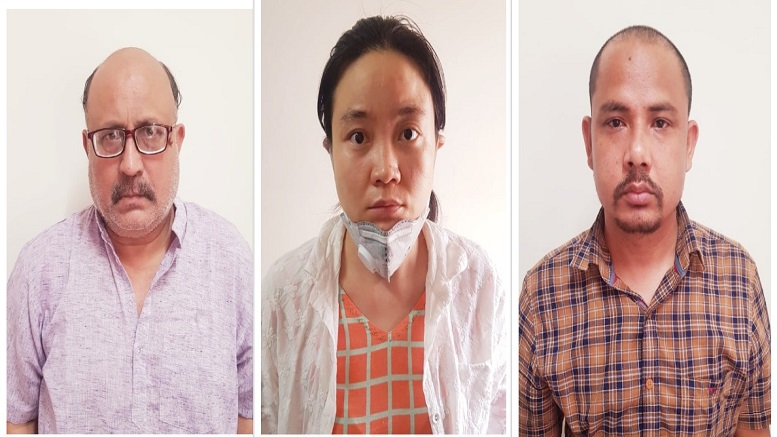 In a major development, Delhi Police has arrested journalist Rajeev Sharma and two foreigners in a Chinese spy ring operating for the last few years in Bharat. The foreigners include a Chinese woman named Qing Shi and a Nepali citizen named Sher Singh. Rajeev Sharma is a freelance journalist who was found in possession of secret defence documents and arrested for violation of Official Secrets Act. He and his accomplices were arrested on 14th of September.

Rajeev Sharma was in headlines in November last year, when news broke that someone was spying on many Bharatiyas through whatsapp using the Pegasus tool developed by Israeli firm NSO Group. He has worked in UNI, Firstpost and also written regular columns for Global Times of China. He had recently written for Global Times about Bharat China tensions. He has also written for The Quint and Dailyo. HinduPost has also learnt that he has worked with Ajit Doval in Vivekananda International Foundation around 2010. When the Pegasus news broke, he had claimed that he was kept under surveillance because his projections were against BJP and Modi in 2019 elections!

According to police Rajeev Sharma was contacted by Chinese intelligence in 2016 and since then had been passing on secret information about Bharat’s defence forces. The DCP Special Cell, Delhi Police Sanjeev Yadav said:-

“Rajeev Sharma has been in journalism for 40 years and has worked for several media houses like – United News of India (UNI), Tribune, Free Press Journal, Sakaal, Hindustan Times, Times of India and Chinese mouthpiece Global Times. In 2016, he came into contact with a Chinese officer named Michael via Linkedin, and was invited to a Chinese city where he was given lucrative offers to share information.”

DCP Yadav also revealed that Sharma had received huge amounts of money via Hawala transactions. In just last one year Sharma received Rs 40-45 lakh via different channels. He was passing sensitive information regarding Army deployment, procurement and Bharat- China relations to his Chinese handlers codenamed “Michael” and “George”. He met his handlers multiple times in places like Laos and Maldives.

It is not yet clear how he managed to obtain the information about sensitive issues. Sharma was a regular in Delhi’s media circles, had a PIB card, and access to ministries. Thus he would have made connections in the right places over the years.

The arrested Nepali, Sher Singh, is a director of a pharma company in Delhi. It is alleged that this is a shell company and provided the front for Sharma’s operations and payments to him were routed through this firm. Thus, this case also has a money laundering angle, which the Directorate of Enforcement should investigate. The Chinese spy had arrived in Delhi in 2013 when she enrolled for a course at Jamia Millia University and had been living in Bharat since then. Her close contacts in the university as well as her social circle should be thoroughly investigated.

The recent developments come at a time when Bharat and China are in a border standoff. It must also be remembered that just last week, news broke of China digitally spying on 10000 Bharatiya citizens including top civil and military leadership. This was even after government had banned about 180 Chinese apps from Bharat on the charge of spying.

This spy ring could be tip of the iceberg. There are almost certainly people in defence establishment who fed information to Rajeev Sharma, that he passed on to his handlers. The interrogation should bring out who else was working with these spies. This is one spy ring and there must be many such cells in Bharat. Some might even be cooperating with Pakistani agencies, which have a much larger footprint in Bharat.