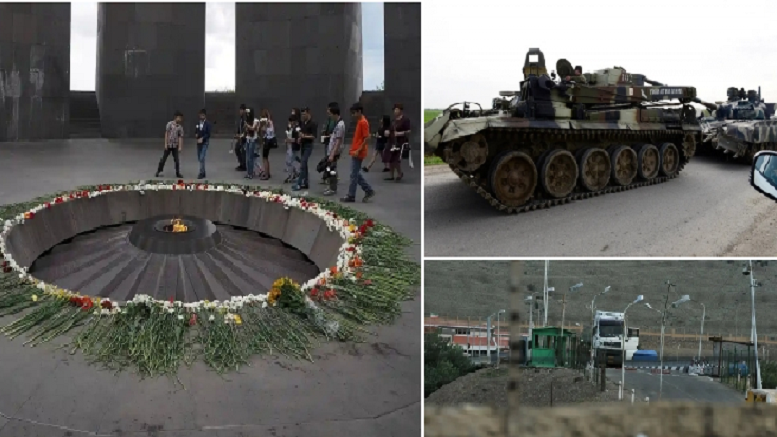 The recent talks between Armenia and Turkey in Moscow, while surprising, were not totally unexpected. This had been a long time in the offing. The two – it would not be out of place to call them civilisational foes – had long ago met to start a diplomatic dialogue – in fact back in 2010.

However, nothing came out of it. Armenia has now appointed a lawmaker from the ruling Civil Contract party, Ruben Rubinyan as special envoy to work on the normalisation of ties with Turkey, while Ankara has appointed former ambassador to the United States Serdar Kilic for the same. They met in Moscow on January 14.

Now, after the end of the war for Nagorno-Karabakh, which Azerbaijan has wrested decisively from Armenia’s control, it is expected that Turkey and Armenia would begin normalisation of relations. Currently, the two countries do not have any diplomatic relations. The reason goes back to the last millennium where 1.5 million Armenians were slaughtered by Ottomans, often thought to be the modern world’s first genocide. The ghost of that slaughter lives in the collective consciousness of Armenians the world over. While major powers, including the USA and Russia, have recognised the genocide, Turkey has refused to do so, fearing threats of reparations if it was to do so.

The Armenia-Azerbaijan conflict remained a reason for Turkey to not engage diplomatically with Armenia. Turkey opposed Armenia’s control over the enclave Nagorno-Karabakh, which in Ankara’s view was territory of Azerbaijan, a fellow Turkic nation. In 1993, it sealed the border with Armenia, depriving the small landlocked country a transit route through Turkish territory.

When war once again broke out between Armenia and Azerbaijan in 2020, most Armenians believed they were fighting the Turks rather than the Azeris. Turkish technology, Turkish arms, Turkish military counsellors won the war for Azerbaijan. After the swashbuckling speeches and promises of victory by Armenian prime minister Nikol Pashinian, the defeat was not merely a military or economic or territorial loss for the Armenians; it was a huge psychological setback for them. Riots broke out on the street and there were many calls for Pashinian to resign. To put it mildly, he is not in a strong position today.

With the end of the war, with Azeri control over most of the contested territory, and with Russian and Turkish joint peace keeping operations, the equation has changed. Economically backward Armenia has the proverbial carrot dangling before it: normalising relations with Turkey will open up a host of connectivity and therefore economic opportunities for it. On the other hand, having a corridor to Azerbaijan through Armenia – the Zangezur Corridor – would greatly aid both Azerbaijan and Turkey. It would especially benefit Turkey’s outreach to both Azerbaijan, Caspian Sea, and the Turkic countries of Central Asia. That would also open up land connectivity for Turkey to South Asia – to Afghanistan where Turkey is keen to play a major role and of course to its ally Pakistan, with major implications for Bharat. Undoubtedly, opening up the corridor would benefit Azerbaijan and Turkey far more.

Will Armenia be willing to do so?

As such, Armenia may have nothing to lose but much to gain by it. But going by the mood of the people, the loss of Nagorno-Karabakh after two long decades to Azerbaijan because of Turkish intervention, the incomplete rehabilitation and resettlement of its displaced residents, it seems a tough call. Capping all this is the fact that the negotiations have been entered into by the government that lost the war and the deeply unpopular prime minister.

For one, Armenians do not want any preconditions attached to the talks.

However, one of the preconditions laid down by Turkey is for Armenia to give up its support for international recognition for the Armenian Genocide; yet another is that Armenia recognizes Nagorno-Karabakh as part of Azerbaijan; and open up the Zangezur Corridor.

The Armenian Genocide remains a deeply emotional issue for Armenians everywhere and a greatly unifying factor, as also a marker of the Armenian identity. While the Republic of Armenia may some day in the future give up this support, to do so right now would add salt to injury. Moreover, there is huge pressure exerted by the Armenians in the diaspora, many of whom have had victims amongst their families.

Secondly, suffering defeat in war to arch-rival Azerbaijan after more than two decades is bad enough. And recognising Nagorno-Karabakh as part of Azerbaijan eliminates any further opportunity to work out some kind of mechanism for joint control of the Zangezur corridor to Turkey and arch-rival Azerbaijan would be double humiliation. To that end, Secretary of the Armenian Security Council Armen Grigoryan is on record saying that, “The issue of the corridor is a red line for us, everyone is aware of it: Azerbaijan and all the countries that have anything with Armenians are aware of it.”

Finally, Turkey’s announcement that it would be coordinating the matter with Azerbaijan is another red flag to the Armenians. Therefore, while Armenia-Turkey normalisation of ties is neither unexpected nor impossible, it will probably remain improbable in the near future. At least not till passions on both Armenian and Azeri sides have cooled down and till the government of the day is perceived to be more mindful of Armenian sovereignty and security interests.

How Ukraine, Germany, USA are helping Turkey to become a formidable military power

Russia sees US reply to its security concerns as unsatisfactory