Can America be blamed for the Afghan crisis? Biden’s hasty withdrawal of US troops from Afghanistan even though there were no US casualties off late and the inability of the NATO allies and the world at large to act  has  ensured that Afghanistan  will become  the Las Vegas of international terrorism  with the swift return  of Taliban within days of US soldiers  leaving  the landlocked country.

Aided and abetted by the Pakistan  military  and the ISI Taliban has defied all intelligence  agencies  by launching a blitzkrieg and pulverising all opposition and laying  siege on Kabul within days of the American pullout.

The way everything  has been choreographed  and crafted gives credence to the theory that it was all a part of the deal. The three lakh strong Afghan army and Kabul holding out for 90 days have all been busted as have been Biden’s claims that the Afghan army has been  well equipped & trained to fight the Taliban.

As we near the 20th anniversary of 9/11 attacks on America, it should  be music  to Biden’s ears that just eight days after he ordered a  pullout of US troops from Afghanistan  the Taliban have entrenched  themselves  in the Presidential  Palace in Kabul  and have released all Taliban  prisoners including Al-Qaeda terrorists.

Biden’s one act has ensured that the lives of Afghan people especially women and children is compromised and this mountainous  country will once again become a safe haven for terrorists and narcotics. Apart from returning to the medieval days Afghanistan is set to become the new epicentre of global terrorism and narcotics with the Taliban hand in glove with the Pakistani army and ISI.

The toothless United Nations could have done more than lipservice by sending in a peace keeping force of all countries thereby ensuring stability of Afghanistan and safeguarding the lives of the Afghan people especially women and children who have now been left to face the brutalities of Taliban.

But the US cannot be blamed alone for the plight that the Afghan people find themselves in. The Afghan government headed by President Ghani – who has now fled the country fearing arrest and  being hanged  like his earlier predecessor Najibullah – has to share the blame for heading a corrupt government, embezzling funds meant for defence & not taking the Taliban threat seriously on the borders as the commanders in incharge pocketed huge amounts of money and were lackadaisical  in their approach. 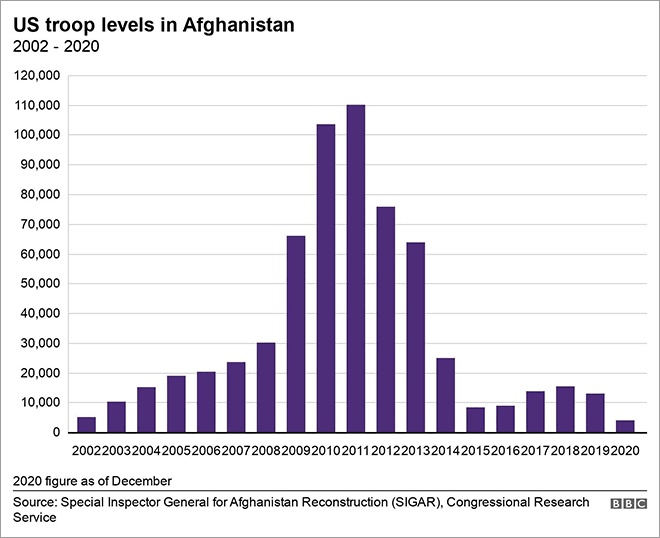 The same Afghan army which was supposed to be 350,000 strong capitulated like a pack of cards in front of the 75000 Talibanis within 8 days. This highlights  the collective  failure  of the Afghans as a nation and their inability to  rise above narrow partisan gains for their  country’s  defence against  the onslaught  of a terrorist & a mercenary  outfit which had ravaged them earlier.

Biden has been arguing for over a decade that Afghanistan was a kind of purgatory for the United States. He found it to be corrupt addicted to to America’s largesse and an unreliable partner that should be made to fend for itself.

Successive Afghan  governments  have been  riddled in corruption and have misappropriated American aid for 2 decades knowing fully well that Taliban , the Hakaani networks and Al-Qaeda  were breathing  down their necks all the time. With the looming instability  in Central Asia and power in the hands of a terrorist  outfit which deals in drugs, narcotics and ransom money for its survival .

Bharat will have to be on extra vigil as Pakistan  will not let go this golden opportunity with the backing of China to create insurgency in J&K and elsewhere.

China must be regaling at the turn of events in Afghanistan as Taliban takes control thereby facilitating the dragon’s Belt and Road initiative.  China is already  building a road from Quetta to Afghanistan  and across Tibet and with Taliban at the helm China will not hesitate in funding the Taliban to meet its expansionist  designs  under Xi jin ping.

For now the world can only wait and watch as it has been  doing even as Taliban  captured the whole of Afghanistan  in eight days.