Blood Telegram: When a few diplomats called out America’s moral bankruptcy in the face of 1971 genocide by its ally Pakistan 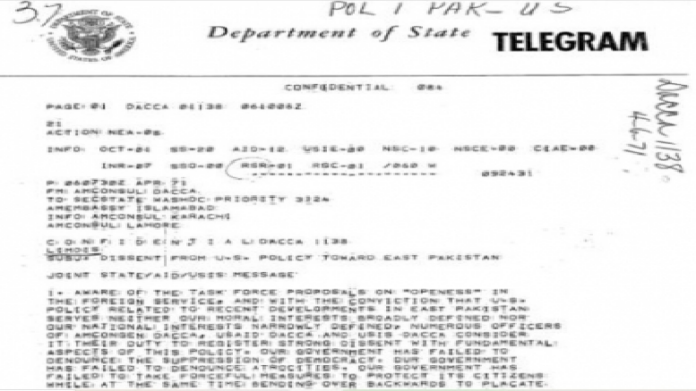 A cable sent by US diplomats in Dhaka on April 6, 1971 to then Secretary of State William Rogers as the Pakistani military was carrying out a genocide in what was then East Pakistan, marked a defining moment for Washington’s role during Bangladesh’s fight for independence.

Putting on record their dissent at the risk of their careers, the diplomats exposed Washington’s hypocrisy and denounced its policy of ignoring the genocide and the suppression of democracy while backing Pakistani dictator Yahya Khan.

Their efforts to “salvage our nation’s position as a moral leader of the free world” were ultimately futile.

The cable is called “The Blood Telegram”, and although it is a fitting metaphor for the massacre the diplomats were writing about, it was named after Consul General Archer Blood who supported the message of dissent by 20 diplomats in Dhaka, whom he described as “among the finest US officials in East Pakistan”.

Blood warned the administration of President Richard Nixon about its support for General Khan, whom he called “the likely loser” saying that it “would be foolish”.

Here is the text of the diplomatic cable from US National Archives:

1. Aware of the task force proposals on “openness” in the Foreign Service, and with the conviction that US policy related to recent developments in East Pakistan serves neither our moral interests broadly defined nor our national interests narrowly defined, numerous officers of AmConGen (American Consulate General) Dacca, USAID (US Agency for International Development) Dacca and USIS (US Information Service) Dacca consider it their duty to register strong dissent with fundamental aspects of this policy. Our government has failed to denounce the suppression of democracy. Our government has failed to denounce atrocities. Our government has failed to take forceful measures to protect its citizens while at the same time bending over backwards to placate the West Pak dominated government and to lessen likely and deservedly negative international public relations impact against them. Our government has evidenced what many will consider moral bankruptcy, ironically at a time when the USSR sent President Yahya (Khan) a message defending democracy, condemning arrest of leader of democratically elected majority party (incidentally pro-West) and calling for end to repressive measures and bloodshed. In our most recent policy paper for Pakistan, our interests in Pakistan were defined as primarily humanitarian, rather than strategic. But we have chosen not to intervene, even morally, on the grounds that the Awami conflict, in which unfortunately the overworked term genocide is applicable, is purely internal matter of a sovereign state. Private Americans have expressed disgust. We, as professional public servants, express our dissent with current policy and fervently hope that our true and lasting interests here can be defined and our policies redirected in order to salvage our nation’s position as a moral leader of the free world.

2. Our specific areas of dissent, as well as our policy proposals, will follow by septel (separate telegram).

4. I support the right of the above named officers to voice their dissent. Because they attach urgency to their expression of dissent and because we are without any means of communication other than telegraphic, I authorize the use of a telegram for this purpose.

5. I believe the views of these officers, who are among the finest US officials in East Pakistan, are echoed by the vast majority of the American community, both official and unofficial. I also subscribe to these views but I do not think it appropriate for me to sign their statement as long as I am principal officer at this post.

6. My support of their stand takes on another dimension. As I hope to develop in further reporting, I believe the most likely eventual outcome of the struggle underway in East Pakistan is a Bengali victory and the consequent establishment of an independent Bangladesh. At the moment we possess the good will of the Awami League. We would be foolish to forfeit this asset by pursuing a rigid policy of one-sided support to the likely loser.