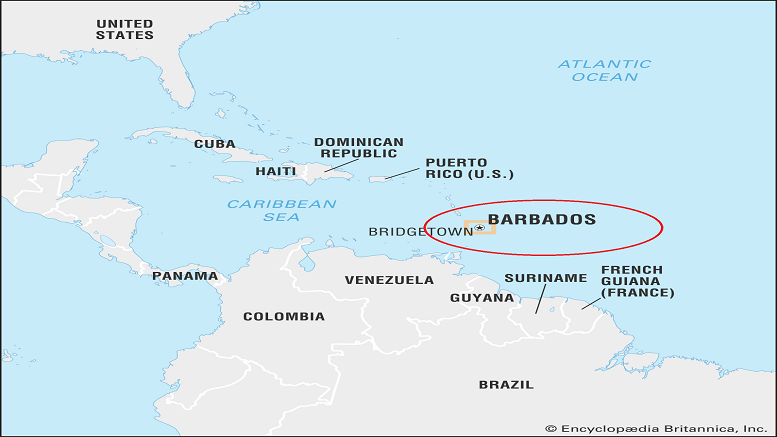 Barbados is located in the Caribbean near Saint Lucia, Saint Vincent and Martinique. It is 34 kilometres (21 miles) in length and up to 23 km (14 miles) in width covering an area of 432 km (167 square miles). The present population of Barbados is 287,000 persons (just more than a quarter-million people) based on Worldometer elaboration of the latest United Nations data.

Five things that have made Barbados world famous: Rihanna, the international singer, songwriter, actress and designer, was born in Barbados; so too is Sir Garfield Sobers, the greatest cricket all-rounder of all time; Honourable Mia Mottley is the first female Prime Minister of Barbados; Barbados has produced the oldest rum in the world from its Mount Gay Distillery; Then, are also its pristine, peaceful beaches.

Barbados has the head office of the Caribbean Examinations Council (CXC) which is under attack these days for its grading system. Prime Minister Mottley is also the Chair of CARICOM (the Caribbean Community) which played a critical role in restoring democracy to Guyana during the recounting of votes following the March 2020 elections.

The following are highlights of a virtual public meeting held on 25th October 2020 on the topic “The Indian community in Barbados: business, religion and race-relations.” The Pan-Caribbean meeting was hosted by the Indo-Caribbean Cultural Centre (ICC). The meeting was chaired by Sharlene Maharaj of Trinidad and Tobago (T&T) and moderated by Sadhana Mohan of Surniname.

The speakers where Hajji Suleiman Bulbulia, Secretary of the Barbados Muslim Association and the Muslim Chaplain of the UWI, Cave Hill Campus; and Sabir Nakhuda, author of the book Bengal to Barbados: A 100-year history of East Indians in Barbados (2013). The discussant was Dr. Kumar Mahabir, an anthropologist from T&T and an Organization of American States (OAS) Former Fellow.

East Indians (Bharatiyas) have helped shape the social, religious, cultural and economic landscape of Barbados. To understand these impacts, the focus must be on the itinerant traders (affectionately called “coolie-man”).

For the itinerant trader, the main driver of undertaking an economic enterprise is to generate income. But his business had several unintended consequences, many of which were positive for the Barbadian society for over 100 years.

The “coolie-man” became more than a friendly trader in the neighborhood; he became a member of the family, a counsellor and an advisor at times. The “coolie-man” in Barbados has many anecdotal stories (positive and negative) which have entered into folklore of the island and have been immortalized in local songs.

The experiences of those who benefited from access to goods on extremely favorable credit terms, at a time when buying cash was the only available option for the poor, is noteworthy. Credit to the average Barbadian was unheard of, and many residents had to struggle on the meagre earnings they received to get along as best as they could.

In the Foreword to the book Bengal to Barbados, former Prime Minister of Barbados, Freundel Stuart, wrote:

“… for many years, I experienced directly, the impact this important group made on the village in which I grew up in the parish of St. Philip. I saw these men alleviate the financial distress of many people who lived in Marchfield, St. Philip.

They took care of back-to-school requirements for parents who could not afford to buy school uniforms by extending generous credit terms to them. At Christmas, the poorest households benefited from credit terms no less generous.”

Unlike the early Bharatiyas in Guyana, Trinidad & Tobago, St. Vincent, Grenada and other Caribbean Islands who went to work in the sugar plantations in the 1800s, Bharatiya indentured labourers were not brought to Barbados. Those who came never intended to come to Barbados, but eventually ended up in Barbados and made the country their home.

The early Bharatiyas came from three different parts of Bharat. The first Bharatiya came to Barbados circa around 1910 from the Hooghly District in West Bengal: Bashart Ali Dewan initially went to Trinidad from Bharat where his father-in-law was residing. He stayed there for a short while and then – for some unknown reason – moved to Barbados. Other Bengalis followed, and Bashart Ali Dewan and these pioneers stayed in the Bridgetown area of Barbados.

From inception, members of the Bharatiya community have continued to practice their culture and religion. The Sindhi-Hindu community made part of their homes into mandirs [temple] until the opening of the first Hindu temple in Welches, St. Michael on the 22nd of October 1995.

The Muslim community continues to practice their faith individually and collectively. In the early days, the Friday jummah [congregational prayers] were performed at private homes at Wellington Street and Cheapside in the city. In 1951, the first masjid [mosque] was built in Kensington New Road.