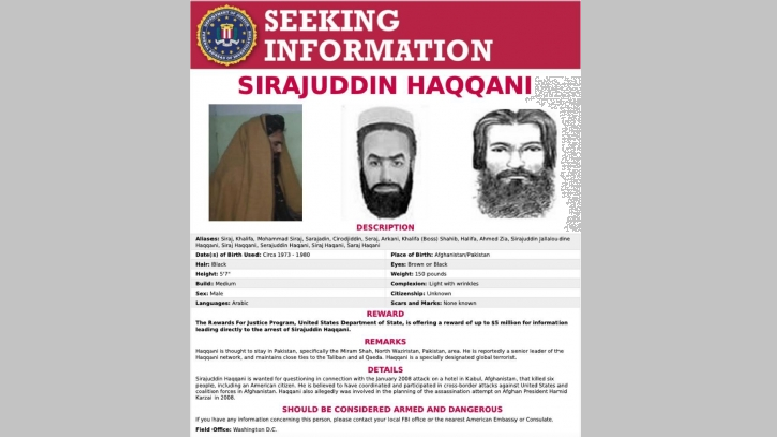 Named new Interior Minister of the Taliban government in Afghanistan under acting Prime Minister Mullah Mohammad Hasan Akhund, Sirajuddin Haqqani of the infamous Haqqani network is wanted by the US, whose Department of Justice offers a reward of up to $5 million for information leading to his arrest.

A top leader of the Taliban, Haqqani, who is said to be in his 40s, had succeeded his father Jalaluddin Haqqani as the leader of the Haqqani network, which has been charged with some of the most violent attacks in Afghanistan and is designated a terrorist organisation by the US.

As per a poster on the FBI website, he is described as a black-haired man with brown or black eyes, 5 feet 7 inches in height, with a medium build and 150 pounds weight, light and wrinkled complexion and an Arabic speaker.

Said to go under the aliases Siraj, Khalifa, Mohammad Siraj, Sarajadin, Cirodjiddin, Seraj, Arkani, Khalifa (Boss) Shahib, Halifa, Ahmed Zia, Sirajuddin Jallaloudine Haqqani, Siraj Haqqani, Serajuddin Haqani, Siraj Haqani, and Saraj Haqani, the Department of Justice says that he is “wanted for questioning in connection with the January 2008 attack at a hotel in Kabul that killed six persons, including an American citizen.

“He is believed to have coordinated and participated in cross-border attacks against the United States and coalition forces in Afghanistan. Haqqani was also allegedly involved in the planning of the assassination attempt on Afghan President Hamid Karzai in 2008,” it says, but cautions that he “SHOULD BE CONSIDERED ARMED AND DANGEROUS”.

“The Rewards For Justice Program of the United States Department of State is offering a reward of up to $5 million for information leading directly to the arrest of Sirajuddin Haqqani,” it says.

However, Haqqani, in an opinion piece in the New York Times last year before the signing of the Doha agreement, wrote: “For more than four decades, precious Afghan lives have been lost every day. Everyone has lost somebody they loved. Everyone is tired of war. I am convinced that the killing and the maiming must stop.”