An unsung hero of the Caribbean: Dr. Jung Bahadur Singh of Guyana 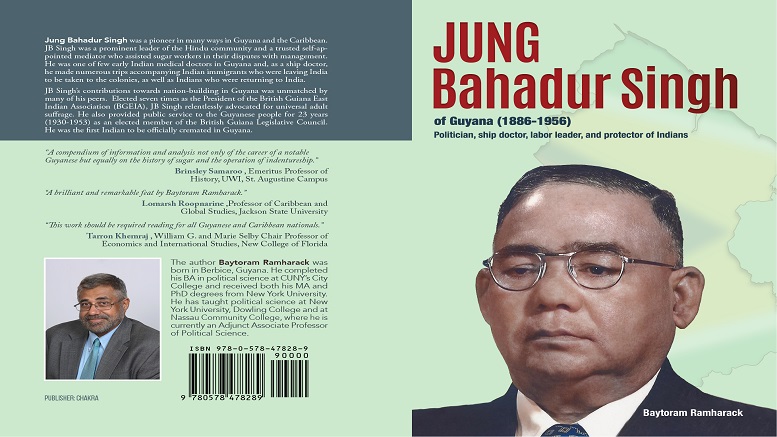 This article is part of a plan that is intended to profile and celebrate Hidden Heroes of the Caribbean. Even in countries in the Caribbean in which (East) Indians are the majority ethnic group, they are not given their fair share of recognition.

In books on national heroes, they are underrepresented. In the distribution of national awards, they are marginalized. This fact can also be easily seen in the proportionately small number of statues erected at roundabouts, and the names of highways, buildings, libraries, airports and sports stadia.

It must be noted that the new book on Jung Bahadur Singh by Dr. Baytoram Ramharack was published by Chakra Publishing, an affiliate company of the Indo-Caribbean Cultural Centre Co. Ltd (ICC). A virtual public meeting, on which this article is based, celebrated the launch of its release on Amazon.com. The following are highlights of that meeting held on 8th November, 2020, on the topic “Unsung Heroes of the Caribbean – Dr. Jung Bahadur Singh of Guyana (born 1886-1956):  A politician, ship doctor, labour leader and protector of Indians.”

The Pan-Caribbean public meeting was hosted by ICC, chaired by Anuskha Sonai and moderated by Dr Kirtie Algoe, both of Suriname.

The speakers were Dr. Baytoram Ramharack, J.B. Singh’s biographer and an Adjunct Associate Professor of Political Science at Nassau Community College in New York; and Varuna Singh, the grandson of J.B. Singh, son of Rajkumari Singh, and brother of Gora Singh (deceased), Karna, Pirtha, Chitra and Radha Singh. The discussant was Ravi Dev, an Indian civil rights activist and a former Member of Parliament in Guyana.

“As the official biographer of Jung Bahadur Singh (1886-1956), I took the audience on a tour of the legacy and achievements of this notable Indian leader. As a second-generation Indian in Guyana, born about 50 years after the commencement of the period of indentureship, and whose parents were of Indian and Nepalese origin, Jung Bahadur Singh understood the nature of the indentureship system that kept Indians bound to the plantations, as well as the experience of the Indians who came out of indenture.

He was a Guyanese pioneer in many ways. J.B. Singh was a prominent leader of the Hindu community and a trusted self-appointed mediator who assisted sugar workers in their disputes with management. He was one of few early Indian medical doctors in Guyana, and, as a ship doctor, he made numerous trips accompanying Indian immigrants who were leaving India to be taken to the colonies, as well as Indians who were returning to India.

J.B. Singh’s contributions towards nation-building in Guyana was unmatched by many of his contemporary peers.  Elected seven times as the President of the British Guiana East Indian Association (BGEIA), J.B. Singh relentlessly advocated for universal adult suffrage. He was a patriot and a humble servant who spent his adult life providing public service to the Guyanese people for 23 years as an elected member of the British Guiana Legislative Council from 1930 until his electoral defeat in 1953.

He was the first Indian to be officially cremated in Guyana. His legacy stands tall with other Indian pioneers like Bechu, Joseph Ruhomon, Cheddi Jagan, and others.”

“Jung Bahadur Singh was born on June 14th, 1886 at Goed Fortuin, West Bank Demerara, British Guiana. His birth was registered as Dinanath, or Dinanauth, or Deenanauth. The recorder omitted the middle names Jung Bahadur which he later changed legally in 1909 to Jung Bahadur Singh, dropping the first name Dinanath.

His father, Dhan Bir Singh, was a Gurka Nepalese who came to British Guiana in the 1870s and was wed to his wife Subhagia, a match arranged by her uncle who was a ship compounder, whose family in Bengal plied haberdasheries to Indians who went into business in the colonies around the world.

Dhan Bir Singh had 15 siblings of which 7 sons and one daughter survived. He also had two half-brothers from his father’s side, after the death of his mother who died from childbirth of her last child.

As a teenager, J.B. Singh became father, provider and educator to his younger siblings. He became a teacher at the age of 14 years at Goed Fortuin and a compounder at the age of 16 years. As a young man, he became the advisor and guide to many locals on the West Bank Demerara and became very close friends with Pitamber Doobay of Vreed-en-Hoop, whose father became a very successful businessman.

It is very clear that this very early experience as a caregiver, care provider, educator, healer and advisor shaped and moulded him into the man he became. His unbelievable patience, tolerance and understanding exuded great trust and confidence, and his serenity provided many with security and safety.”

“From previous presentations in this forum, I have learnt that most people in our community, are very impatient when we go into the history of anything. “Why do we have to dig up the past?” is the usual complaint. Well, to quote William Faulkner, “The past isn’t dead; it’s not even past.”

Everything in the present is created out of the past and there are always traces influencing us. As one famous analyst pointed out, “Men make their history, but not in circumstances of their making”. The circumstances are all formed out of past actions. The fact of the matter is that we do not have an appreciation of history – or its liberating possibilities – and that’s why we (East) Indians in the Caribbean keep on repeating our tragedies as farces.

I will begin, like Varuna with some personal recollections of J.B. Singh. You see, I grew up with my nana [maternal grandfather] from the age of six, and he was born in 1896. He worked on the sugar estate of Uitvlugt on West Demerara. But by 1947, he had owned a saw pit and a farm, which generated an income that qualified him for the still restricted franchise, even though recently expanded. He voted for J.B. Singh who ran in the West Demerara Constituency and who won as a member of the Labour Party.

He did so again in 1953, by which time the universal franchise had arrived, which gave my 27-year-old sugar-worker father the vote – which he cast for the firebrand Marxist Cheddi Jagan. As I grew up, my nana always reminded my father of what he called the latter’s betrayal of Indian culture. My mother was a patient of first J.B. Singh, and later his son Hardat Singh. My mother always remembered the latter’s prescription of Bitamic C for the “cold ridden” child that I was, but had the grounded wisdom to tell her to give me cherries!

But what does the story and life of J.B. teach us in the present? For that, we must examine that present from which we are asking those questions?

For one, we have been here in the Caribbean for 182 years. We saved Guyana as a viable proposition because we saved the sugar industry and have contributed in all areas of Caribbean life. We fought sugar interests in the modern era which led to independence.

Yet, those contributions which should make us Caribbean citizens with cultural, economic and political rights as much as anyone else is not recognized.

Why?  Well, as one anthropologist from Haiti – Michel-Rolph Trouillot – has put it, our history – our story, our narrative of our contributions have been silenced. Nobody knows our story – much less J.B. Singh’s contribution.

Now, this is not an accidental matter or an oversight, but a conscious, transitive act taken by those in power. And it’s always a differential in power that makes some narrative possible and others silenced.  Troullet pointed out that a people’s history can be silenced at four critical moments in the process of historical production through definitional power.

4. History – the moment of retrospective significance (making history) looking back, like what Dr Baytoram just did. What will be out and in, and what will be left out?

Therefore, “any historical narrative is a particular bundle of silences.”  Or silenced story, including that of J.B. Singh, is a metaphor of our lack of power to even define our existence.

What are we to do about our history? Let’s continue writing our history as Baytoram has done. Train and encourage our youths to reverse the silences. Study history and the humanities, our career choices are always more utilitarian.

Attorney Fenton Ramsahoye once told me that without a self-conscious elite that thinks, reflects and is concerned about the fate of their people, they can always be destroyed. The changes we want can only be engendered through the middle class, but they were destroyed.

Recommendation: There need to build Indian institutions formed in Guyana to promote an Indian Guyanese agenda.