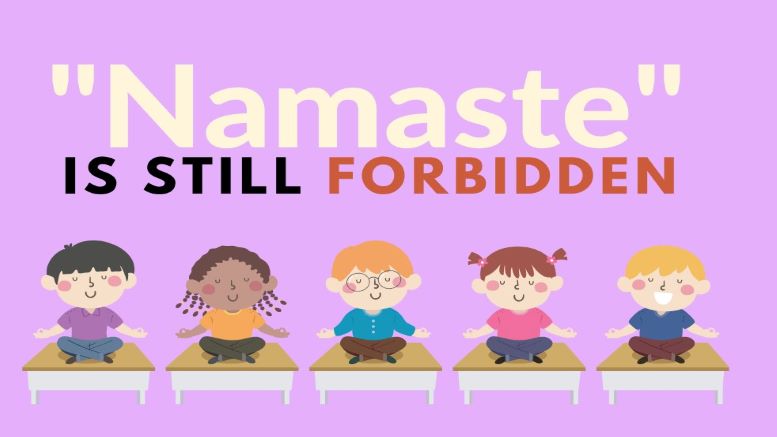 The Alabama House of Representatives overturned a decades-old ban on Yoga in Alabama public schools. The bill that authorized schools to decide whether they want to conduct yoga classes in K-12 schools was approved with 73-25 favorable votes. However, they want to delink it from Hindu Dharma despite the fact that yoga has its roots in and is inherently connected with Hindu Dharma.

The ban on yoga along with that on hypnosis and meditation in classrooms was banned in 1993 due to the demands made by conservative groups. However, Democratic Rep Jeremy Gray is sponsored the bill calling for an end to the ban citing health benefits of yoga postures. The Time quotes Gray as saying “I’ve been in yoga for seven years. I know the benefits of yoga, so it was very dear to my heart, and I think Alabama will be better for it”.

The bill explicitly forbids use of chanting, mantras and teaching the greeting “namaste”. Further, the moves and exercises taught to students must have exclusively English names. Gray said students would also have the option to not participate and instead do an alternative activity. This is nothing but an attempt to completely remove Hindu elements from yoga and rob the latter of its originality.

Several Hindu organizations including Coalition of Hindus of North America (CoHNA) have highlighted the point that though Alabama lifting the yoga ban is welcome but at the same time such attempts to delink it from Hindu Dharma are not. This does amount to cultural appropriation which has been called out by Hindus.

This is nothing but an attempt to digest Hindu Dharma in what the west assumes is its entitlement. This is Hindumisia at play and anti-Hindu bigotry has been mainstreamed in the US under Christian preachers who hold sway over the masses particularly policy makers and direct the course of action. These preachers often equate Hindu Dharma with ‘satan worship’ the result of which can be clearly seen in the bill passed by the Alabama House of Representatives.

Even though Gray has probably meant well by having the ban revoked but by reducing yoga to just a set of exercises shorn of its Hindu roots and the bill itself clearly being against chanting of mantras & using namaste, this is what Shri Rajiv Malhotra term’s as digestion of Hindu Dharma.

Detailing this process of cultural appropriation/digestion in his article, Shri Malhotra says:

The West has often embarked on and justified programs, missions and schemes to bring the rest of mankind around to it’s own worldview.

Just as the tiger, a predator, would, the West, a dominant and aggressive culture dismembers the weaker one – the deer – into parts from which it picks and chooses pieces that it wants to appropriate; the appropriated elements get mapped onto the language and social structures of the dominant civilization’s own history and paradigms, leaving little if any trace of the links to the source tradition. The civilization that was thus “mined” and consumed gets depleted of its cultural and social capital, because the appropriated elements are then shown to be disconnected from and even in conflict with the source civilization. Finally, the vanquished prey – the deer – enters the proverbial museum as yet another dead creature (i.e. a dead culture), ceasing to pose a threat to the dominant one.

Such cultural appropriation may at first appear as the meeting of equal cultures; however, while at the level of popular culture it may be so, at the deeper levels, where the core assumptions of a civilization reside, the playing field is tilted. After being digested, what is left of a civilization is waste material to be removed and trashed. While the “tiger” or the host (the West) is strengthened, the living identity of the “deer” disappears forever. The prey is thus lost, its generative capacities gone. Eventually, to take the metaphor further, the entire species of “deer” gets rendered extinct, thereby diminishing the diversity of our world.

We can easily draw parallels with what is happening with yoga to how pagan rituals and cultural symbols were appropriated by Christianity and pagan religions were totally obliterated. Hindus have a reason for concern because West has a history of totally replacing Bharatiya sources with western ones while assimilating Bharatiya Hindu culture.

In this regard, Shri Malhotra says:

I want to differentiate between this kind of digestion and the way Greek civilization has been assimilated into “Western” classics without losing track of the sources. While many Indian thinkers, texts and ideas got digested into so-called “European Enlightenment”, and the Indian sources got replaced with Western ones, the same is not true of Greek civilization.

Totally delinking yoga from Hindu Dharma is not and should not be acceptable. While all are welcome to derive the benefits of a health system put in place by our rishis it is both immoral and theivary to not acknowledge and instead cut off its Hindu roots .