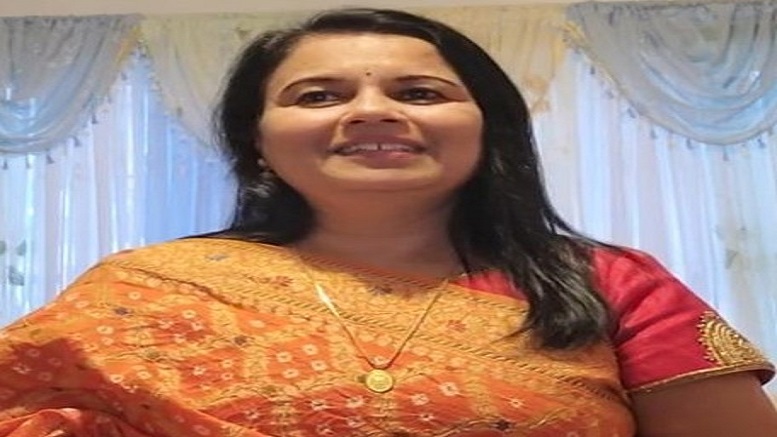 It was the day of Diwali 2020 when Abhilasha Rathi made up her mind to helm the Maheshwari Mahasabha of North America (MMNA) for the next four years. She was pleasantly surprised when her name was proposed but mulled over it for a few days.

While her husband Bharat and father-in-law Prabhulal Rathi were supportive and left the decision to her, it was her mother-in-law Draupadi Rathi and daughters Suhani and Shriya, who, she says, encouraged her to take up the challenge. A member of the New England chapter in Boston, this acceptance makes Abhilasha the second woman president in  MMNA history after Dr. Seema Rathi.

The Maheshwari community, whose origins are steeped in fascinating folklore, hail from Rajasthan. The organization was created in 1983 to preserve the community’s culture and traditions and to connect the Maheshwari community living in the US and Canada. Today, it boasts of 4000 plus members with ten Chapters spread across North America. One of the biggest industrialist families of Bharat, the Birlas, belong to this community.

Born in Neemuch, Madhya Pradesh, Abhilasha was raised in Hyderabad, Telangana. After completing her graduation in Commerce, she married Bharat, a software professional, and moved to Boston in 1991. Determined to carve out a career, she enrolled for various courses but eventually gravitated towards Client Server Programming. She is currently the Software Quality Engineering Manager at CVS Health where she oversees QA processes to ensure that the software meets technical, functional, and business requirements.

A significant portion of Abhilasha’s work involves leading teams and calls for “collaboration and management skills”, qualities she needs in spades in her new position. Rather than “managing,”  she prefers to use the term “serving” the team and enabling their success because when “your team is successful, you’re successful.” One of her favorite quotes by Henry Ford sums up her style of working:  “Coming together is a beginning, staying together is progress and working together is success.”

Aside from her own inclination, Abhilasha traces her community service mindset, in part, to her parents Vijay Kumar and Urmila Taori. She recalls the constant stream of people who would drop in to discuss community matters with her father. In hindsight, she appreciates her mother’s unstinting support for her father’s passion for community work. In a fortunate coincidence, she found a similar sense of social commitment in her husband’s family. These firsthand lessons would be invaluable in forging her own path for community work.

As a teenager, she was actively engaged with the Maheshwari Samaj, Rajasthani Graduates Association and other organizations. After joining MMNA, she served in different roles but repeatedly emphasizes that a position or designation has never been important for her – making a difference is reward in itself.

Underlining the benefits of working in the community, she cites the instance of the 2016 International Maheshwari Rajasthani Convention. Although the New England Chapter signed up to be hosts of the convention, the logistics were daunting given that the number of volunteers were limited. As co-convenor, she encouraged members to enroll in the planning and execution and after an 18 month planning period, what crystallized, apart from a successful convention, was an extremely close knit group that is bonded to this day. Abhilasha was also at the frontlines of the 2020 virtual MMNA Utsav.

As general secretary for the past four years, Abhilasha worked with President Vikas Bhutada in setting up and maintaining various communication channels so Chapter leaders could collaborate with each other easily. She used her tech expertise to spearhead systematic procedures that helped everyone be on the same page and actively worked with the digital team. These experiences have helped her develop a personal rapport with members of the different chapters that will serve her well in the coming years.

Abhilasha is also involved in causes like the Walk for Hunger where she walked 20 miles, not once but several times, to raise funds for the program and the annual Cancer Walk to support friends who are cancer survivors. During COVID-19, she along with MMNA members, supported the cause of food donations to shelters. She has three key takeaways from all these years of volunteering: Be adaptable, persistent and celebrate small wins.

Her list of goals for her term as president include greater engagement with seniors, more participation by the Rajasthani Abroad Youth Samaj (RAYS)), celebrating festivals like Teej and Gangaur, strengthening current initiatives such as interest free loans to deserving students, matrimonial alliances, providing guidance to entrepreneurs, the women’s wing (Sakhi) and philanthropic efforts like food drives and walks to support causes. The new president also plans to roll out a Professional Networking Group to connect the youth of the community.

With so much on her plate, Abhilasha keeps herself fit with walking, yoga, and Zumba. Her soul is nourished by the Bhagwad Gita and she likes to unwind by donning the chef’s hat and bringing “creativity to her cooking.” Hawaii remains an all-time favorite holiday destination.