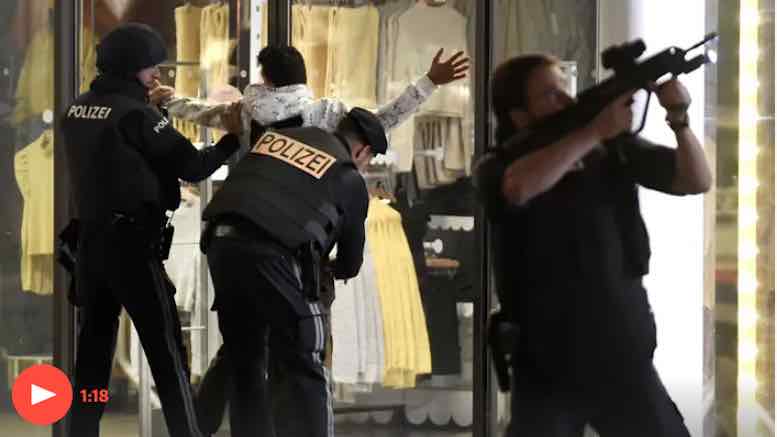 At least 3 people have died, and 15 injured critically, including a police officer, in an Islamic terrorist attack in Vienna, capital of Austria. Multiple terrorists appear to be involved as there are reports of shootings across six locations. One terrorist has also been shot dead by police.

“Austria’s Interior Minister said that the gunman who was shot dead in Monday’s terror attack in Vienna was radicalized.

“The radicalized person is someone who is an IS sympathizer,” said Interior minister Karl Nehammer, referring to the terrorist group Islamic State in Iraq and Syria (ISIS).

During a press conference early this morning, Interior Minister Karl Nehammer added that police had used explosives to enter the attacker’s residence and were investigating its surroundings.

…Gunfire erupted in the city center at around 8 p.m. local time on Monday, just before the start of a nationwide lockdown to combat a resurgence of Covid-19, according to police. Gunmen with automatic weapons began shooting at six locations.

….One gunman has been shot dead by police, while at least one assailant remains on the run.”

Just a few days back, France was rocked with two different Islamic terror attacks over ‘blasphemy’ against Islam’s prophet, one in a school and the other in a Church, in which 4 people died. French President Macron vowed to crush Islamic extremism and said ‘fear would change sides’, inviting a wave of well-coordinated angry protests and calls for Macron’s murder across the Muslim world, including in Bharat. Turkey and Pakistan were at the forefront of these protests. Incidentally, this attack in Vienna comes just a week after the Austrian Parliament condemned Turkey’s involvement in the Armenia and Azerbaijan conflict.

Europe has faced dozens of such attacks by Islamic terrorists since 9/11 – UK, France, Belgium, Sweden, Holland, Spain, Germany, all have faced multiple attacks. Many commentators have claimed that multiculturalism has failed and that Muslim immigrants have failed to integrate with European host country values. According to the Pew Research Center, as of 2016 the total number of Muslims in Europe is just 4.9%. 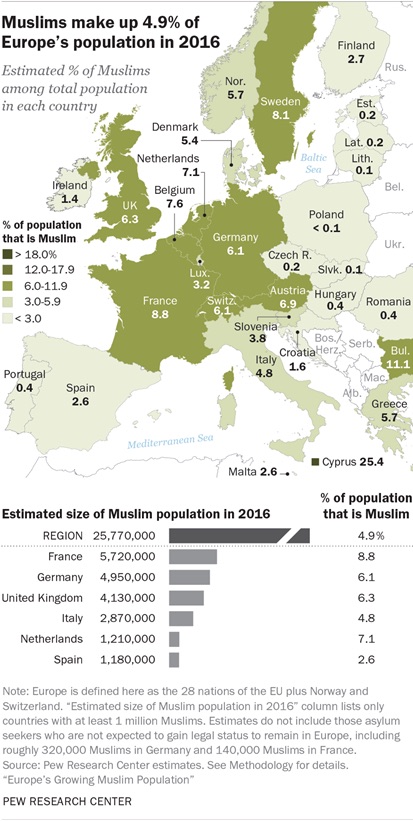 The response to the threat of Islamic terror on their homeland has been a sharp rise in vote-share of far-right/ultra-nationalist/neo-Nazi parties in most European countries. The PMs of Hungary and Poland who have taken a hardline stance against Muslim immigration are fast gaining popularity across the continent.

As a backlash, there have been cases of terrorism by White nationalists too, such as the Christchurch mosque shooting in New Zealand and mass shooting by Anders Breivik at a children’s summer camp in Norway.