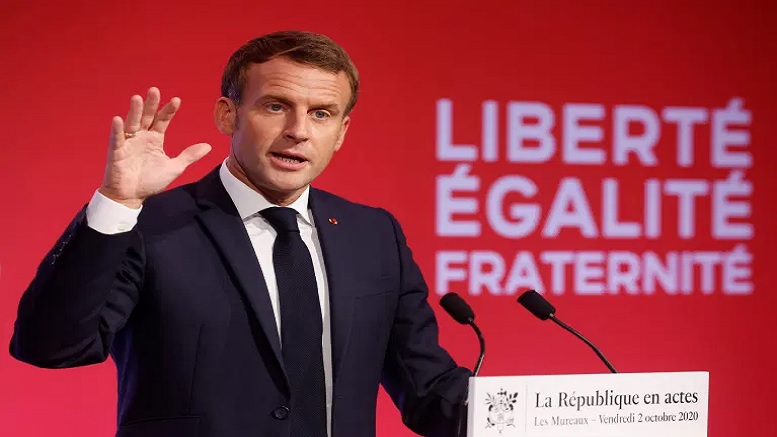 The French Parliament passed a historic legislation on February 16 to curb the threat posed to the nation by Islamic radicals — the Act included a section named after Samuel Paty, the Paris schoolteacher who was beheaded by a fanatic Muslim last October just because he had made a mention of a cartoon on Islam’s Prophet Mohammad in his lecture on social science.

Without mentioning the word Muslim or Islam, the Act prescribes punishment for anybody who passed on information about a potential target of Islamic radicals, mandates an oversight on what the madrasas were doing and demands adherence to the French values of secularism, democracy and freedom. Islam is the second largest ‘faith’ practised in France and it is noteworthy that Islamic radicals have become a problem in those European nations that had colonised Muslim countries once — in the case of France it was also known that a large number of Muslim youth had gone to Syria to join in the ‘war on terror’ which was essentially a combat between the revivalist Islam preached by the radicals and the US-led West.

Islamic radicals carry the historical legacy of the Ulema-led ‘Wahhabi’ movement of the 19th century that had given a call for Jehad against the Western powers encroaching on ‘Muslim lands’ — in Algeria, Arabia and Bharat — as also for going back to the fundamentals that prevailed in the golden period of the ‘Pious’ Caliphs from which, according to the protagonists of that Jehad, Muslims and their rulers had deflected causing the political decline of Islam. In the theatres of the ‘war on terror’ and elsewhere, radicalised forces are taking on the US-led West and their closest allies, including Israel and even Saudi Arabia.

The masterminds behind them find it easy to create faith-based motivation for unleashing terror — the motivation that drives terrorism proves, in this case, strong enough to produce suicide bombers. The democratic countries have to unitedly deal with this global threat and also work on the saner sections of the Muslim world to come out with proclamations against the invoking of Jehad for solving any political issues in today’s times.

Bharat is at the receiving end of this geo-political rise of violence at the hands of Islamic extremists over many years — ever since the launch of cross-border terrorism in Kashmir in the early Nineties by the Pak Army-ISI axis that took advantage of the success of Afghan Jehad for replicating that strategy in Kashmir and began pumping in battle-hardened Mujahideen into the Valley from across the LOC. Subversion in Kashmir was started in the name of Islam — the earlier slogans of plebiscite and Azadi were pushed behind — and the ouster of Kashmiri Pandits from the Valley by the ISI-guided Islamic militants became a major part of the new plan.

Pakistan has been using the Hizbul Mujahideen, Lashkar-e-Toiba and Jaish-e-Mohammad outfits fostered by it for Bharat-specific offensive. Subsequently, Pakistan also used the Islamic radicals of Al-Qaeda-Taliban and ISIS who were on the forefront of the ‘war on terror’ that had followed 9/11.

Pakistan has withstood the pressure of the world community calling it to stop harbouring Islamic militants and with its deep military collusion with China on the one hand and the change in US Presidency on the other — President Donald Trump had stopped financial aid to Pakistan — it has felt encouraged to step up cross-border terrorism against Bharat, particularly in the period following the abrogation of Art 370 by the Government of Bharat. Bharat has to use diplomacy and Intelligence exchange with friendly countries to supplement the efforts at home to counter terrorism in Kashmir and elsewhere with full armed might.

A matter of grave concern for Bharat in recent times is the constant attempt being made by the Pak agencies through their agents and acolytes to destabilise the domestic scene in Bharat by instigating communal disharmony and exploiting it to create militancy.

Bharat’s history of Partition violence made it vulnerable to communal conflicts and the attitude of the leadership of the minority community in seeking a ‘share’ in the political power beyond the democratic electoral process based on ‘one man one vote’, kept the pot boiling, making it easy for the Islamic state of Pakistan to fish in this country’s troubled waters. In the North, the Students Islamic Movement of India (SIMI) formed by an AMU-based leader of the Jamaat-e-Islami became, after a passage of time, an anchor of Islamic militancy with its offspring, Indian Mujahideen (IM), attracting notice for indulging in terrorist violence.

A militant communal force arose in Kerala some years ago in the name of the Popular Front of India (PFI) with Malappuram district as its epicentre, to foster communal separatism in the south and step up militant exhortations to the Muslim youth to bring down the Modi regime. It is said to have links with SIMI on the one hand and Al-Qaeda and ISIS on the other — with Pak ISI pulling strings from behind.

In a brazen challenge to the ruling dispensation at the centre, considering that the organic links of BJP with RSS are well known, PFI brought out a mock parade near Malappuram on February 21 in which men in RSS uniform as also those dressed up as British soldiers were shown walking tied up in chains with the leash wielded by PFI members, who were wearing skull caps and ‘lungis’ and shouting slogans like ‘Allahu Akbar’. What is alarming is that the Islamic radical organisation did this to mark the centenary of the ‘Moplah rebellion’ against the British that is known more for the massacre of tens of thousands of Hindus by the Muslim fanatics in that part of Kerala.

In the backdrop of international trends and developments at home, Bharat needs to concretise a multi-pronged strategy of dealing with the advancing threat of radicalisation impacting our communities. The average Bharatiya, regardless of his caste, community or region is engaged in the pursuit of livelihood and well-being — it is a section of the community leadership driven by vested interests that chose to promote the communal divide by demanding a share in the ‘political power’ for the minority and happily watched the rise of militancy borne out of communal conflicts. Pakistan, as a promoter of Pan-Islamism, claimed the right to champion the political cause of Indian Muslims and community leadership here went along with it, facilitating the exploitation of Bharat’s domestic situation by the adversary.

The Pak agencies also got into the act by creating direct or indirect channels to influence minority politics in Bharat. Ascendancy of Islamic radicals during the ‘war on terror’ further changed the geo-political scene of South Asia and beyond –again because of the pivotal role of Pakistan in sheltering Al-Qaeda, Taliban and ISIS and using them to weaponise its ‘proxy war’ against Bharat in Kashmir as also in the rest of Bharat. The masterminds behind this ‘war’ are using the cover of social media to influence and trap members of the minority community for ‘radicalising’ them before using them for their objective.

Exasperated over the victory of the BJP led by Narendra Modi in 2019 with an even larger margin, the political opposition, leadership of the minority community and the anti-Bharat lobbies within the country and outside are making efforts to invoke the name of RSS for making allegations of Hindu ‘majoritarianism’, ‘fascism’ and ‘authoritarianism’ against the regime. The opposition is understandably focusing on the large Muslim minority to gain numbers. The domestic scene in Bharat is marked by an accentuation of Hindu-Muslim divide and a sharp increase in the rhetoric of militancy on the one hand and a visible emboldening of Islamic radical forces instigating terrorism, on the other.

Pakistan is playing a game in all of this. Since it is well known that all Bharatiyas enjoy the same personal and socio-cultural freedoms — subject to the requirements of peace and orderliness of the society — and also that the democratic governance in this country is constitutionally well-defined in terms of a secular relationship between the citizen and the state, all those who are being instrumental in adding to the stir were apparently pursuing a political objective.

There is learning for Bharat from the steps envisaged by France to deal with faith-based militancy. First, there should be no ambiguity about defining the responsibility for the maintenance of law and order in all its aspects — the Centre needs to adopt a line of deterrence to get the states to discharge their primary responsibility in this matter. There is a clear dividing line between public criticism of the government and giving calls for militant action — even President Donald Trump was flawed for his speech in which he exhorted his followers to march to the Capitol in Washington on January 6 this year.

It is necessary to have an outreach to the minorities to protect them from their own communal minded leaders. As already mentioned, there should be a mobilisation in the democratic world and among the ‘moderate’ Muslim regimes to oppose resorting to violence in the name of Jehad. A clear proclamation to this effect should be sought from Muslim forums, minority institutions and madrasas in the country and deterrent prohibitory action initiated against radical bodies and individuals giving calls for faith-based violence. Bharat should declare zero tolerance towards terrorism of this kind.

This is an important and timely piece by an ex-Director of the Intelligence Bureau. But we would humbly disagree with one assertion of the esteemed writer, which is-

Personal law of Indian Muslims is governed by a medieval sharia law. The Punjab & Haryana High Court recently ruled that a minor Muslim girl can marry as soon as she hits puberty, which can occur for girls as young as 9 in some cases! Even the instant triple talaq banned few years back with much fanfare barely scratches the surface in terms of reform needed on this front.

Also, the secularism of the Indian State is deeply flawed in theory and practise, as it clearly interferes in religious and other affairs of the majority Hindu population – these distortions need to be removed before the Indian State can begin to act in the self-assured manner shown by France.