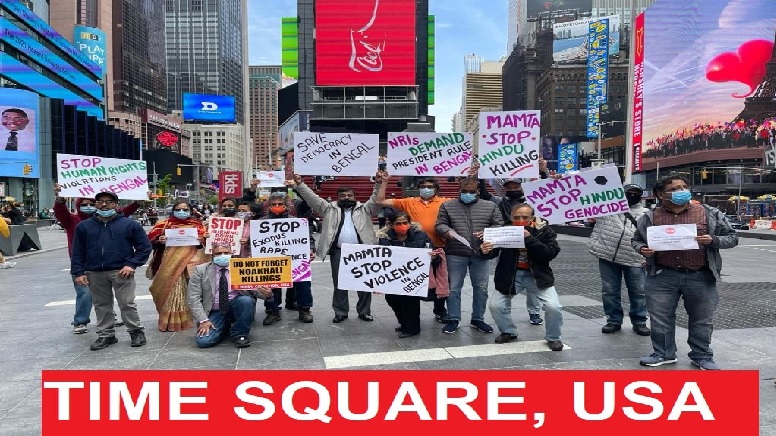 The Hindu community of New York met before the Indian Consulate to protest the Genocide of Hindus in the Bharatiya state of West Bengal, post-elections there [1-3]. The post-election violence against Hindus in West Bengal has shocked the nation and the global community [4-8]. The brutality and the barbarism have been beyond any post-election situation in any state in Bharat or globally in recent memory.

Over 100,000 people have been displaced due to the exodus caused by looting, arson, rape of women folks, and the fear created by Islamists and TMC goons directed at Hindus of all political colors [9 -10]. Several villages have been wiped out in the devastation. People have been forced to take shelter in neighboring Assam where a friendly BJP government exists [11].

Villagers, around 1000 families, have been forced to spend time in the open air fleeing the marauding mobs [12].  Even in the cities, BJP supporter and animal lover Abhijit Sarkar was lynched before his mother [13-16].  His rescued dogs were also killed by the goons [17]. Houses of many others were looted, women are being threatened with rape and men started receiving WhatsApp messages with threats of dire consequences (death threats).

The state of West Bengal is unlike any other state. It was partitioned on religious lines in 1947 and has a sizeable Muslim population. The state government under Mamata Banerjee has been feeding the Islamists in the state for a long. These groups are used to create violence against the Hindus particularly those who support the political party BJP in the state.

Even though Mamata Banerjee was in power for two terms (10 years), her regime saw many allegations of corruption. Extortion by her party supporters was pervasive in all walks of daily life. There was a flight of industries and employment in the state was low. This led many to support BJP. These people were met with brutal force by the Jihadis and TMC goons.

Before the elections, 147 BJP supporters were already killed [18]. Some of them were hanged to death by the treetops. During the elections, the current Chief Minister Mamata Banerjee had warned that post-elections, after the Central forces leave, the BJP supporters will be taken care of [19]. In colloquial language, she had termed it ‘Khela Hobe’ (there will be a game) [20]. She had also referred to the Islamists as ‘Dudhel Goru’ (The cow that gives milk). Adding that it is worth getting some kicks from such cows as well. Post elections she kept both words and handed over Hindus in the state to the Islamists. Over 2 crore (20 million) people have voted for BJP. All of them today face the threat of extreme violence against them.

The violence has affected many parts of the state. With large-scale attacks against the Hindus, it has assumed the scale of genocide. BJP party chief JP Nadda who visited the state reported more than 100,000 people have fled their homes. It reminded him of partition [21]. The Ministry of Home Affairs at the center has sent a four-member team and has asked for reports from the Mamata Banerjee government within 48 hours.

The continued violence has created an atmosphere of fear among the Hindus throughout the state [22]. This includes districts of Cooch Behar [23], North and South 24 Parganas [24], Nadia, Birbhum and in places like Canning, Diamond Harbor and others. Reports of gang rape have surfaced in many parts of the state. There are villages after villages where men have been forced to seek shelter because of threat to life. Women at home are facing molestations [25], rape and are even being killed. Even elderly women are not being spared [26].

The administration has turned a blind eye. In some cases, Hindu homes have been looted and with nothing to spare. Crops have been destroyed; cattle and livestock stolen by the TMC goons. The residents need urgent medical help.

The National Commission of Women Chief who arrived in Kolkata is being refused permission to meet the victims. She is also being asked to leave the state by Mamata Banerjee. She had quoted “Violence is not happening in one place, but many other places. In West Bengal, women are being attacked and their properties are set on fire, they are being thrashed. In some videos, it is also being said that women are being raped. I have sent a team to West Bengal along with a legal expert. We will conduct an inquiry into the matter and if possible, we will also meet the victims,” while describing the alarming situation [27]. Attempt on the life of a central government minister who wanted to meet the victims was also made [27-28]. The Governor of the state of West Bengal has condemned the violence before the Chief Minister herself [29].

Under these circumstances and ghastly stories emerging out of the ground in the state of West Bengal, braving the threat of Covid-19, members of the Hindu community in 50+ cities and in 30+ nations spreading over 5 continents have come out on the streets to hold a vigil, to urge the international community to end this Genocide.  They are urging the global community to put pressure on the Mamata Banerjee government to act fast and against the perpetrators. They are also urging the central government in Bharat to explore the possibility of the President’s rule so that millions of peace-loving Hindus can be saved.

The organizer of the event,  Judhajit Sen Mazumdar said, “This is just historic. Hindus worldwide have united to send an unequivocal message to stop the genocide“. MAA Rajyalaxmi, Omni Channel Tech (by profession) and an ordained priest (by choice), organizer from New Jersey said, “Mamata after the election seems to have made good on her promise to chastise (putting it mildly) those that did not support her. It is as if she in her euphoria of victory has opted for a visceral celebration by unleashing her sanguinary dogs and turned West Bengal into a veritable crematory that pales in comparison to the insidious and invidious misery-porn peddled a week before of bodies burning on the streets and the anchor asking for dignity in death.” Hemant Bhai Patel, a prominent organizer from Chicago, described the situation as frightening.

Hashtags with #MamataStopViolence, #SaveBengalHindus, #StopHinduGenocideInBengal, #BengalBurning  and #PresidentRuleInBengal have been trending on social media all day [30]. The brutality and torture that has been unleashed on Hindu women in the state of West Bengal cannot be ignored and women’s rights leaders must condemn this violence. The Mamata Banerjee-led administration is brazenly flouting all democratic values and must be held accountable for crimes against humanity.