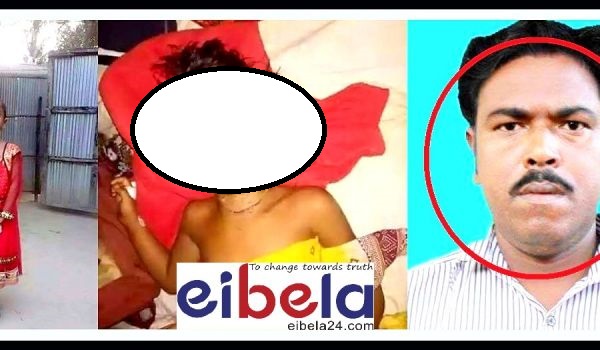 A distressing account of rape and torture of a 5-year-old Hindu girl by a 42-year-old rapist, Saiful Islam, has come in from Dinajpur, Bangladesh.

As per site, eibela24.com, the 5-year-old from the minority Hindu community has been barbarously raped & her private organs torn and burnt with a cigarette, after locking her up for 18 hours by a paedophile Muslim rapist Saiful Islam at Parvatipur (a former Hindu majority colony once, named after Goddess Parvati), in Bangladesh last Tuesday, 18 October.

There are lots of injuries by sharp weapon on the little girl’s cheek, throat, hand and leg, bite marks on the body, and wounds of cigarette burns on her face and thighs. Presuming that her death is inevitable, her body was disposed off finally at an adjacent field by the perpetrator Saiful Islam.

As per police reports, at Parvatipur upazilla’s Rampur Union’s Jameerhat area’s Takkiapara village – Subhash Chandra Das and Mrs. Rupali Rani’s 5-year-old baby daughter went out for playing at the adjacent fields on Tuesday at around 11 am. She is also said to have headed for buying ‘Chutney’ a local spicy sauce, at a nearby eatery. However, when she did not return even after a few hours, her parents became anxious and proceeded to search for her.

But she was nowhere to be found. Finally, they resorted to make a loudspeaker announcement in the area and registered a general complaint with the local police. But still, throughout the day and till late night she could not be found. It was only around early dawn on Wednesday that at a nearby field her bruised body was found.

She was rushed to Rangpur Hospital, where according to her statement, the primary accused, Saiful Islam, a man of 42 and a resident of her area itself who happens to be the son of the local wood seller Jasim Uddin, was identified. Saiful’s picture was uploaded and even after 6 days when he was not arrested, the role of police was questioned. Finally, after much pressure from all sides, police finally arrested the absconding criminal Saiful on 24 October at around 7:30 p.m.

Parvatipur’s Model Station’s Officer In Charge Mahmudul Alam has confirmed the news of his arrest.
On the other hand, Dr. Golam Azam at Rangpur Medical College has said, that a beast-like torture has been inflicted upon the child. Maggots/Myesis have been detected in her private parts. Everyday dressing of the same is being done. Sometimes the child is opening up her eyes and staring blankly and closing in minutes. She has not been saying anything. The trauma is still well prevalent. She will take much time to recover.

The child is only 5yr old. There are lots of injuries by sharp weapon on her cheek, throat, hand and leg. Bite marks on body. Wound of cigarette burns on thigh. The raped child of Dinajpur was admitted in One-stop crisis center(OCC) of DMCH yesterday (Tuesday) at 11 a.m.

Bilkis Begum, Co-ordinator of One-stop crisis center(OCC) of DMCH where the child is currently admitted, told that ‘We meet different victims regularly. It’s usual to us. But we can’t be normal after seeing this child. Inspite of being a doctor, it’s difficult to control myself.’

Sexual crimes against Hindu girls & women, confiscation of Hindu property, desecration of Hindu temples are common in Bangladesh – of late there has also been a spate of brutal murders of Hindu priests. Ironically, while this child was brutalized and police took belated action against the accused, a visiting BJP woman MP just this week declared that ‘Hindu minorities are safe in Bangladesh.’

We’re a non-profit. Make a donation and help pay for our journalism.