25,000 Gather for Islamic Prayers to Fight Coronavirus in Bangladesh 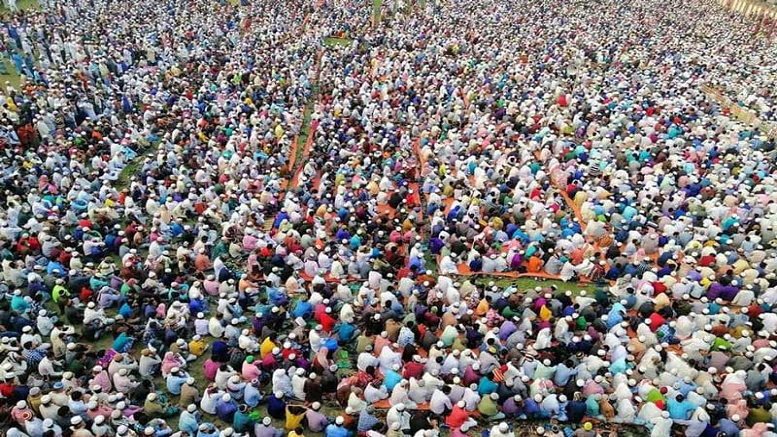 At least 25,000 people performed a prayer named Khatme Shifa or Ayat ash-Shifa (Six Quranic Verses of Healing) to seek the containment of the pandemic COVID-19 at the Central Eidghah of Lakshmipur’s Raipur.

The khateeb (who delivers the sermon of prayer) of Chittagong’s Andarkilla Shahi Jame Mosque Maolana Syed Md Anwar Hossain led the prayer, which was organized by Haiderganj Taheria Central Eidgah Jame Mosque, from early morning Wednesday to 7am. The whole area was flooded with thousands of devotees, and the chanting of their prayers could be heard from miles away, according to locals.

This happened at a time when the government has been routinely urging people to avoid public gathering as a precaution to protect all from the COVID-19 pandemic.

Raipur Police OC Tota Miah and local police outpost In-charge Inspector Belayat Hossain said they did not know anything about the hours-long prayer. Echoing their remarks, Lakshmipur Superintendent of Police AH Kamruzzaman said he too, did not know about the program.

He said: “It was not any Mehfil (Islamic Program); they gathered at the place and performed prayers to seek redress from the pandemic after the Fazr Waqt.”

Lakshmipur Deputy Commissioner Anjan Chandra Pal wondered how the organizers managed to execute the program without any permission from the authority and assured Dhaka Tribune that they did not issue any permit. He said: “I directed the Upazila Nirbahi Officer (UNO) to issue a show-cause letter to the organizers’.”

Syed Taher Zaberi, general secretary of the mosque, could not be reached for comment.

Later, UNO Sabrin Chowdhury held a meeting with the members of the special prayer organizing committee. In that meeting, Syed Taher Zaberi regretted holding of the program claiming that they did not anticipate such a big gathering centering the special prayer.