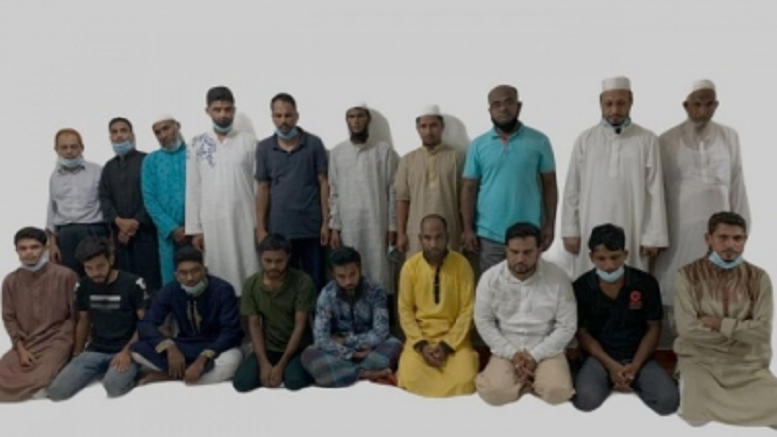 At least 19 militant leaders and workers of Jamaat-e-Islami, and its student wing Islami Chhatra Shibir have been arrested in Bangladesh’s Chattogram city, officials said.

Police said the militants were arrested on late Monday night from a house – Rangunia Building in Mazar Lane, Adurpara.

A police officer told IANS that the militant leaders had motivated several groups to oust the government, and made sabotage attempts in Dhaka-Chittagong and Cox’s Bazar-Chittagong highways by disrupting important places and government institutions. Police had received intelligence reports of the secret activities in various places, particularly, ward-based motivational activities against the government is going on by the militant war criminal outfit, by the name of Islam, blackmailing innocent people.

The police officers also exposed the plan of a sabotage attack opposing the pro-liberation Awami League government and the execution of Matiur Rahman Nizami, Abdul Quader Mollah and other war criminals of 1971 central leaders of Jamaat-e-Islami, and against the detention of other leaders, including Delwar Hossain Sayedee, the war criminal and other militant leaders of the outfit.

Acting on a tip-off, police raided the house, said, Rajesh Barua, Inspector (Investigation) of Chandgaon Police Station. He said 15 other militants have escaped and attempts are being made to arrest them.

Baura said a case has been filed under Special Power Act with Chandgaon police station against 19 leaders and activists arrested on Tuesday.

Books published by Islami Chhatra Shibir, the student wing of the militant outfit seized from the scene, including ‘What We Want, Why We Want, How We Want’, ‘Islamic Unity and Islamic Movement’ edited by Golam Azam, the top war criminal and militant, ‘Bangladesh from Palashi’, ‘Evidence of Truth’ written by Sayed Abul Ala Maududi, founder of Jamaat-e-Islami and other two books, published by Jamaat-e-Islami.