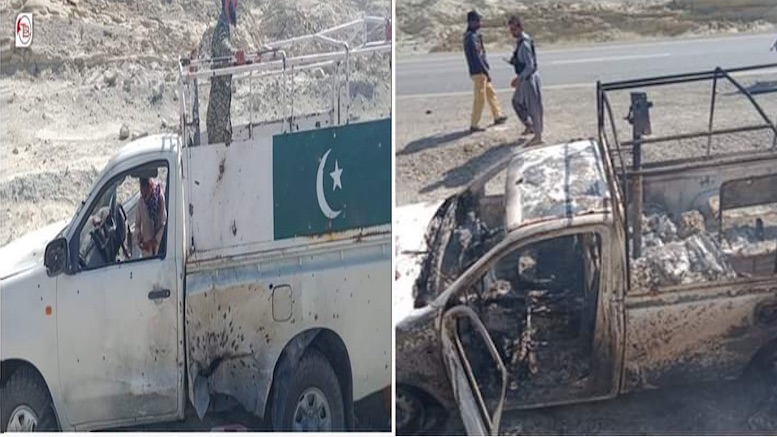 A massive attack on a Pakistani convoy on a coastal highway near Ormara (Makran) in the restive province of Balochistan has claimed 15 lives yesterday.

The convoy of vehicles carrying employees of the state-owned Oil and Gas Development Corporation accompanied by security forces was travelling to Karachi from the port town of Gwadar when they were ambushed near the small town of Ormara, about 250 km west of their destination.

The major highway where the attack happened is part of the CPEC (China-Pakistan Economic Corridor) project, which in turn is a vital component of China’s controversial One Belt, One Road (OBOR) project. The corridor seeks to connect China’s western province of Xinjiang with Gwadar port, giving Beijing access to the Arabian Sea.

Why is the Pakistani media mostly muted about this huge story? Censoring attacks in Balochistan will not make the world and esp China believe that the province is peaceful. https://t.co/VO4xlzWenA

The attack was similar to previous assaults by armed ethnic Baloch separatist groups on convoys on the same stretch of highway. In a similar attack in April 2019, at least 14 people were killed in the same area. In July, at least 8 soldiers were killed when Baloch gunmen attacked a security forces convoy in the Panjgur area, about 160 km north of the site of yesterday’ attack.

The Baloch people have been waging a struggle for independence ever since the illegal annexation of Balochistan by Pakistan in 1948.

Balochistan is geo-strategically significant and resource rich. One of 4 Pakistani provinces (Punjab, Sindh and Khyber Pakhtunkhwa being the other 3), it is the largest province by area, constituting 44% of Pakistan’s total land mass. One of the major cause behind the conflict is the loot of Baloch resources and systematic oppression of Balochs by the Punjabi-dominated Pakistani state.

The Pakistan Army acts like an occupying force which uses violence to dehumanise the occupied people, uses state institutions to disappear the dissidents, bombs villages and captures women, says Hyrbyair Marri, founder of the Free Balochistan Movement and a former minister in the Balochistan provincial govt. who was forced into exile after Pervez Musharaff’s military coup.

Now China has joined hands with Pakistan to violate international law in Balochistan, extract its resources and militarise Balochistan’s coastal belt to have a better stranglehold on Bharat, adds Marri.

In a separate development, at least 6 Pakistani soldiers were killed during an improvised explosive device attack on their convoy near the town of Razmak, in North Waziristan district, Khyber Pakhtunkhwa province on Thursday. Violence in the districts of North Waziristan and South Waziristan bordering Afghanistan, once home to the Tehreek-e-Taliban Pakistan (TTP), has been on the rise this year, with a series of gun attacks and bombings targeting security forces.

In 2014, ethnic Pashtuns (also known as Pakhtoon, Pathan) launched the Pashtun Tahafuz (Protection ) Movement (PTM) for Pashtun human rights in Khyber Pakhtunkhwa and Balochistan. PTM criticizes the Pakistan Army and accuses the Pakistani state of violating the basic human rights of the Pashtuns.

In another development, massive protests have rocked Pakistan’s Sindh province following a move by the Imran Khan government, backed by China, to ‘develop’ twin Dingi and Bhandar islands near Karachi.

Various Pakistan’s Sindh-based political parties, mainly the Sindh Taraqi Pasand Party (STTP), recently participated in a massive rally to protest against the government’s plan, alleging that China might undertake construction activities in these islands which could snatch the livelihood of at least 800,000 fishermen and destroy the local ecology. The STTP said Sindh had been victimised time and again by the federal government under false pretence and unfound reasons.