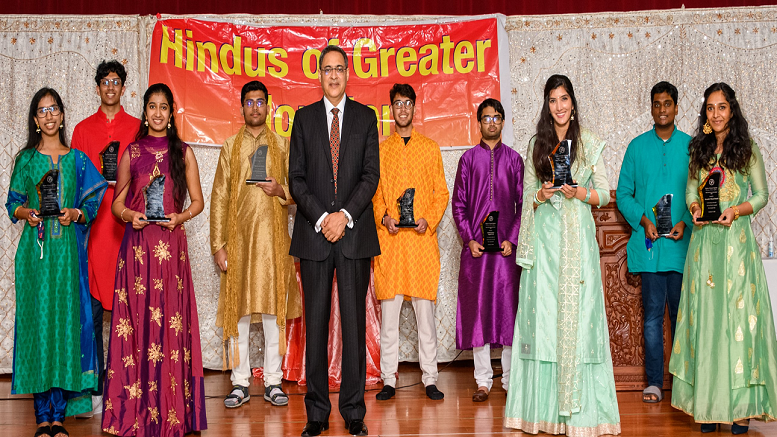 Hindus of Greater Houston closed out 2020 with an uplifting event, honoring ten Hindu youth who live their Hindu values by finding enterprising ways to serve the community. Nominated by various Hindu faith based organizations, they were recognized for their service to the community and promoting Hindu culture at the 10th Virtual Annual Hindu Youth Awards. The event was hosted by Vallabh Priti Seva Samaj (VPSS), Houston.

The celebration was energized with the recognition of the youth and their efforts by none less than the Prime Minister of Bharat Narendra Modi. In a letter addressed to HGH, he called these awards an opportunity for the youth to “further strengthen the connect with their roots.”

The awards were presented by Chief Guest Consul General Aseem Mahajan who lauded the youth for displaying leadership and their participation in the community as “it builds a strong foundation and binds the community.”

At the outset, VPSS Trustee Rashesh Dalal welcomed the virtual participants and the minimal gathering of awardees and their families who maintained strict social distancing norms.

An overview of HGH’s activities during 2020 was offered by President Thara Narasimhan. HGH participated in 20 city and international events during the year, organized multiple food drives and one blood drive. The president also highlighted the sincere efforts and achievements of the youth who had been nominated by their respective organizations.

Described as a “silent but persistence karyakarta (worker),” Dr. Madan Luthra was awarded the 2020 Akhil Chopra Unsung Heroes award for his selfless service especially during the country’s battle with the pandemic. Dr. Luthra, a retired research scientist from MD Anderson, volunteers as a core lead and is one of the initiators of the Case Management division of the Family Services program of Sewa.

Dr. Luthra and his team step in “like a family member” to help those  coping with emergencies, accidents, medical issues, death and bereavement and family disputes.

Dr. Luthra, 73, delivered groceries at the doorsteps of COVID-19 affected families, arranged the final rites for grieving families, tapped Sewa’s network to find accommodation for stranded international students and even navigated insurance details for those who didn’t understand the process.

One of his biggest contributions was to start a plasma donor registry for COVID-19 patients with Sewa volunteer Kavita Tewary. In every case and situation, Dr. Luthra put his philosophy of Nar Seva Narayan Seva (serving humanity is serving divinity) in practice. Likewise, he encouraged the youth to continue their spirit of service, find unique ways to serve and  inspire others.

Actor Nitish Bharadwaj’s convincing portrayal of Krishna in B. R. Chopra’s immensely popular television serial Mahabharat won him millions of fans. He keynoted the 2007 Janmashtami celebrations and was welcomed by throngs of Houstonians. The actor, who is also a veterinarian, returned once again as keynote speaker for the Hindu Youth Awards event.

While introducing him, community leader Vijay Pallod shared an incident with the actor. In 2007, when he asked Nitish Bharadwaj which hotel he’d like to stay in, the actor replied: “aapka ghar itna chota hai?” (Is your house that small?)

The endearing simplicity, the twinkle in his eyes and his thoughtful approach to the values of Hindu Dharma was on full display in his virtual keynote message to the awardees.  Hindus, he observed, have proved to the world that they assimilate wherever they go, “like sugar dissolves in milk.” They not only introduce other cultures to Bharat’s richness but also imbibe the positive qualities of the country they live in. NRI’s, he asserted, are Bharat’s Peace Ambassadors.

Sharing another perspective, he emphasized the importance of encouraging the next generation to not only learn about their Bharatiya roots but experience it for themselves. Using the word “anubhuti” to describe the sense of fulfilment that comes from experience, he said this happiness can be achieved by understanding the tenets of Hinduism, practicing our rituals and celebrating our festivals.

A powerful example of Sanatan Dharma is its emphasis on peace. Some challenge Krishna being described as a messenger of peace or “shanti dhoot” because they believe that he was the initiator of the war. Krishna, the keynote speaker explained, tried his level best to stop the war but when he realized it was inevitable, he participated in what was a “Dharma Yudh.”

Referring to awards, which may not conform to the Bhagwad Gita’s oft quoted line of working without any expectation of rewards, he emphasized that awards encourage and motivate awardees to strive higher. We must do our “bit for Hindu Dharma,” he urged, and spread goodness, peace and benevolence. He also added that words can represent intentions, but actions speak louder than words and positive actions must be consistently performed because “this is what the world needs today.”

The keynote speaker also commended high for their tireless work in unifying Hindus and congratulated the youth for bringing accolades to Bharat and raising Bharat’s image in the world.

A short cultural program by children and women formed the entertainment segment of the evening.

Another Hindu youth attacked by Muslims in Karnataka