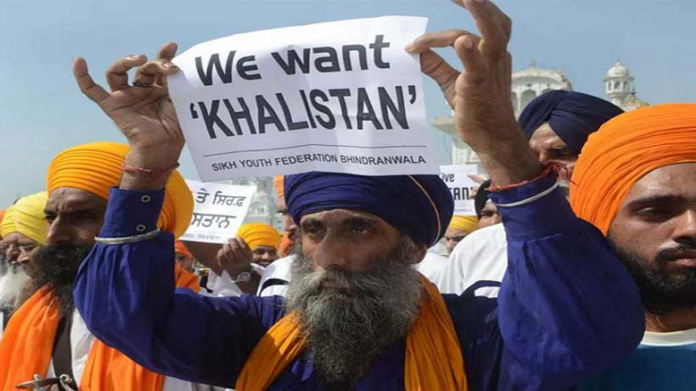 What’s really happening in Punjab? Being born and brought up there and having lived through dark ages, I am concerned today, like every patriot.

We all know, the money, men, motivation & resources are coming from Canada. But why is Canada doing it and why is nobody stopping it. You see, Canada is a toothless tiger. They hardly have any armed forces. They depend on US for protection so their geopolitics and foreign affairs are driven by the US. On their own they couldn’t dare take such a bold step of becoming a hub for initiating an insurgency against a powerful state like Bharat. So who is doing it?

Answer is: US deep State!! That is the ‘real’ root.

The deep state of US nurtures Muslim Brotherhood (MB) and uses it to create disturbances in Middle East to then control oil and instigate insurgencies in other countries to control them and to supply arms & ammunition for conflicts which they themselves trigger.

Benefits are obvious, control oil and keep their Military Industrial Complex in business making huge profits, which in turn funds US politics. One of the key goals of MB is Gazwa-e-Hind and it has been trying hard to destabilize Bharat. Deep state is irked with Bharat for its stand on Russia and generally it has always been suspicious of Bharat and in a way, dreads its potential.

So their goals merged here too & Deep State started providing back end support to MB to create a hub of anti India forces in Canada, for all practical purposes a vassal state of US. Deep state can end these anti India activities in Canada in minutes but it won’t do it as it is the one backing it. Of course, Bharat knows about it but can’t do nothing as it is the deep state and not “US”. It has plausible deniability. And there is no point talking to Canada as it is not in its hands!

Now Punjab was mired in drugs, unemployment and lacked direction and leadership hence, the youth were completely disillusioned. This created a vacuum, a huge opportunity that the separatist forces sitting in Canada started exploiting. Punjabis are crazy for music. Separatists lured talented singers from Punjab, brain washed them and started charting out catchy songs where the underlying theme was revolution, reprisal for past injustices (read 1984 riots etc), guns, drugs and high life.

This heady concoction led the youth of Punjab astray, singing to their tunes. But the separatists still did not have an entry point in Punjab. People like Deep Sidhu, etc., could not provide an impact at the political level.

Then enters Kejriwal- His naked ambition and evil designs to grab power at any cost, provided the separatists their ‘partner in crime’, one they were looking and hoping for. They allegedly funded him (they themselves proclaimed they gave AAP Rs. 100 crs for elections). This point is reinforced by the fact that Arvind Kejriwal stayed with known separatists during his campaigning. Just recently, Punjab speaker went to Canada and was facilitated by terrorists openly.

So now is the payback time for AAP. Hence, the broad daylight killings in Punjab on everyday basis. The police force is completely demoralized as separatist sympathetic officers have been put at the helm gangs based out of Canada (are you surprised?) are carrying out these killings but clearly at the behest of separatists. They are having a field day as it seems clear that Kejriwal and Bhagwant Mann are ably providing the cover. So once again, in summary, the sequence is-

Their violent operators on ground in Punjab – Gangs based out of Canada/Dubai/Pak (sympathetic havens) I am concerned but not worried as Modi is at d helm. I am sure he and his govt (read Doval) exactly know about it. They very much understand the cloak and dagger games being played by powerful international forces against Bharat. I am sure, they will smoke these evil forces within Bharat and outside, at the right time.

Let this thread be a warning signal to all the evil forces that have been mentioned above!

Let us keep the faith!

(This article has been compiled from the tweet thread originally tweeted by Randeep Sisodia (@Randeep_Sisodia) on November 12, 2022.