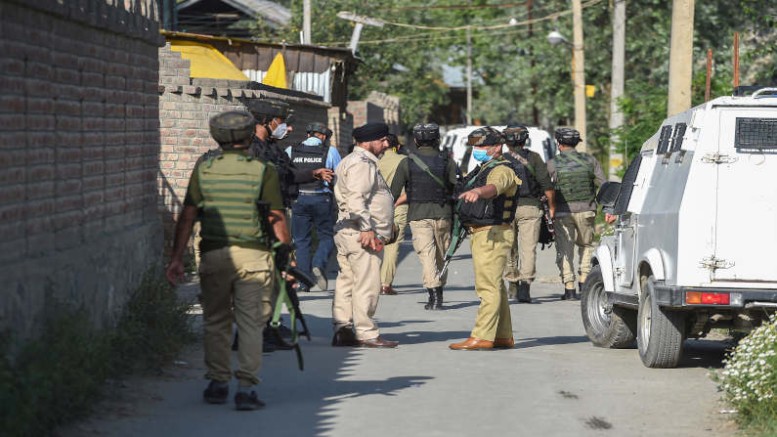 In a major anti-terror operation, five terrorists, including a self-styled district commander of proscribed outfit Lashkar-e-Taiba (LeT), were killed in an encounter between terrorists and security forces in the Hanjin Rajpora area in South Kashmir’s Pulwama district, officials said on Friday. One army jawan also attained veergati in the encounter, the police said.

The police said that during the intervening night of July 1/2, acting on a specific input regarding the presence of terrorists in the Hanjin Rajpora area, a joint cordon and search operation was launched by the police, the army and the CRPF.

“During the search operation, the civilians were evacuated to safer places. As the presence of terrorists got ascertained, they were given an opportunity to surrender. However, they fired indiscriminately upon the joint search party, which was retaliated leading to an encounter,” the police said.

Due to darkness, the operation was suspended though the cordon remained intact throughout the night.

“On Friday morning, repeated announcements were made urging the hiding terrorists to surrender, but the terrorists again fired on the joint search party which was retaliated. In the initial exchange of fire, two army jawans received gunshot injuries and were rushed to the hospital. Unfortunately, one of them later attained martyrdom,” the police said.

During the ensuing encounter, five terrorists were killed and their bodies were retrieved from the site of the gunfight.

“All the killed terrorists were linked to the proscribed terror outfit LeT,” the police said.

As per records, all the killed terrorists were part of groups which were involved in many terror crime cases and civilian atrocities, the police said.

Arms, ammunition and other incriminating materials were recovered from the site of the encounter.

“One SLR rifle belonging to the J&K Police, which was snatched by terrorists in 2016, was also recovered from the encounter site,” the police said.

Meanwhile, IGP Kashmir Vijay Kumar has congratulated the police and the security forces for successfully conducting the operation in a professional manner.

HinduPost comment : In recent days, terror activities have picked up in Kashmir valley. The situation in Afghanistan, with Taliban capturing more territory and supplies on a daily basis is also a cause of concern. After the jehadis capture Kabul, the logic of pan Islamism dictates that they will certainly try to create trouble in Kashmir.