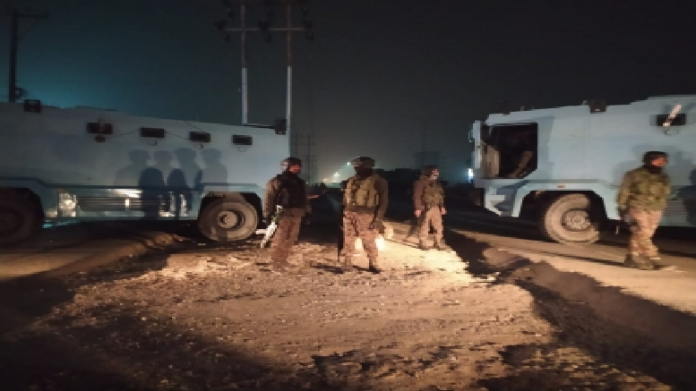 A local youth, who was among the three civilians also killed in the encounter with a foreign militant in Srinagar’s Hyderpora area on November 15, was found to be staying with the militant and in their ranks himself, the Jammu and Kashmir Police said on Tuesday.

Addressing a media conference at the police control room (PCR) here, DIG, Central Kashmir, Sujit Kumar, gave a detailed presentation about the investigations carried out into the Hydeprora encounter and said that the CCTV footage and other evidences show that building owner, Altaf Bhat was used as a human shield by foreign militant, Bilal Bhai, who was living in Dr Mudasir Gul’s chamber along with the youth, Amir Magray.

The DIG, who was heading the SIT into the Hyderpora encounter, said that CCTV footage shows that Dr Gul was travelling with the foreign militant in his vehicle in Srinagar.

“The footage and other evidence show that Magray had accompanied the foreign militant during Jamalata Srinagar attack. Magray would often travel to Bandipora and Gurez, an angle which is still under investigation,” he said.

He said prima facie evidence shows that Dr Gul was shot dead by the foreign militant on the directions possibly from across.

“The investigations reveal that the building owner, Altaf Bhat was made human shield by foreign militant and that he was killed in the crossfire,” the DIG said.

The DIG said that Magray was a militant while there were some questions about Bhat too.

“Family of the building owner has not given any satisfactory reply as to who was living on rent, what was their rent payment system, rent deed etc. There are no satisfactory details from Bhat’s family,” he said.

The police media conference was held on a day when officials said that the magisterial enquiry into the Hyderpora encounter had been completed by the Additional District Development Commissioner, Srinagar and that the District Magistrate has passed on the report to the District Judicial Magistrate.

The contents of the magisterial enquiry have not been made public yet.