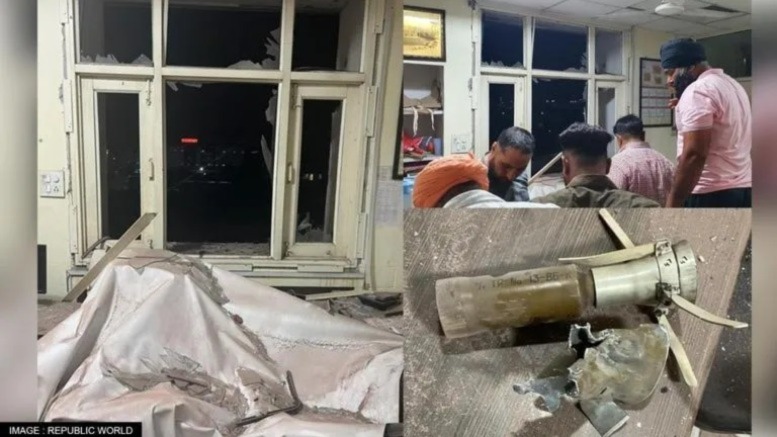 Punjab Police on Friday claimed to have achieved a major breakthrough in the rocket-propelled grenade blast in Mohali earlier this week with the arrest of six terror suspects. Babbar Khalsa International was involved in the attack carried out on the behest of Pakistan intelligence agency ISI.

Director General of Police (DGP) V.K. Bhawra told the media here that they have cracked the case. Canada resident Lakhbir Singh Landa, a close associate of Pakistan-based Khalistani terrorist Harvinder Singh Rinda, is the main conspirator of the attack.

Landa, who shifted to Canada in 2017, is an associate of Rinda, who had hatched the conspiracy. Both work for the Babbar Khalsa International and the ISI, he said. The arrested include Kanwar Bath, Baljeet Kaur, Baljeet Rambo, Anandeep Sonu, Jagdeep Kang and Nishan Singh. Nishan Singh allegedly provided the rocket-propelled grenade that caused the blast.

Rambo, a resident of Tarn Taran, picked up AK-47 rifle and gave to Chadat Singh, who is absconding. Mohammad Aseem Alam and Mohammad Sarafraj, both Noida residents who hail from Bihar, have been arrested, police said.

Nishan Singh was the first arrest in the case. He got the rocket-propelled grenade (RPG) from Landa and gave it to three persons. The grenade hit the Intelligence bureau headquarters in an upscale locality of Mohali near here on Monday evening, shattering window panes on the third floor of the building.

“The RPG was fired from a distance by unidentified persons who are believed to have fled in a vehicle. A Swift car was spotted at the spot,” a police officer had told IANS, adding “before the attack a recce was carried out by two miscreants”.

The attack was aimed to harm high-level Organised Crime Control Unit officials who have offices in the Intelligence wing headquarters.